From Infogalactic: the planetary knowledge core
Jump to: navigation, search
For other uses, see Bashkir (disambiguation).

The Bashkirs (Bashkir: Башҡорттар başqorttar; Russian: Башкиры) are a Turkic people indigenous to Bashkortostan, extending on both sides of the Ural Mountains, on the place where Eastern Europe meets North Asia. Groups of Bashkirs also live in the Republic of Tatarstan, Perm Krai, Chelyabinsk, Orenburg, Tyumen, Sverdlovsk, Kurgan, Samara and Saratov Oblasts of Russia, as well as in Kazakhstan, Ukraine, Uzbekistan and other countries.

Most Bashkirs speak the Bashkir language, which belongs to the Kypchak branch of the Turkic languages and share cultural affinities with the broader Turkic peoples. In religion the Bashkirs are mainly Sunni Muslims of the Hanafi madhhab.

There are several theories regarding the etymology of the endonym Bashqort. 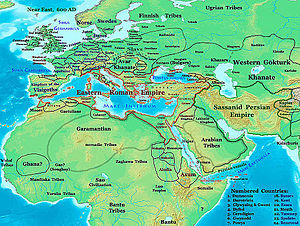 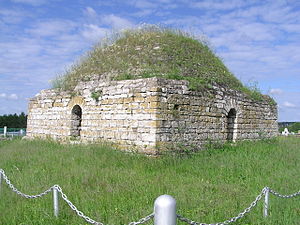 Early records on the Bashkirs are found in medieval works by Sallam Tardzheman (9th century) and Ibn-Fadlan (10th century). Al-Balkhi (10th century) described Bashkirs as a people divided into two groups, one inhabiting the Southern Urals, the second group living on the Danube plain near the boundaries of Byzantium——therefore – given the geography and date – referring to either Danube Bulgars or Magyars. Ibn Rustah, a contemporary of Al Balkhi, observed that Bashkirs were an independent people occupying territories on both sides of the Ural mountain ridge between Volga, Kama, and Tobol Rivers and upstream of the Yaik river.

Achmed ibn-Fadlan visited Volga Bulgaria as a staff member in the embassy of the Caliph of Baghdad in 922. He described them as a belligerent Turk nation. Ibn-Fadlan described the Bashkirs as nature worshipers, identifying their deities as various forces of nature, birds and animals. He also described the religion of acculturated Bashkirs as a variant of Tengrism, including 12 'gods' and naming Tengri – lord of the endless blue sky.

The first European sources to mention the Bashkirs are the works of Joannes de Plano Carpini and William of Rubruquis in the mid-13th century. These travelers, encountering Bashkir tribes in the upper parts of the Ural River, called them Pascatir or Bastarci, and asserted that they spoke the same language as the Hungarians.

By 1236, Bashkortostan was incorporated into the empire of Genghis Khan.

During the 13th and 14th centuries, all of Bashkortostan was part of the Golden Horde. The brother of Batu-Khan, Sheibani, received the Bashkir lands to the east of the Ural Mountains – at that time inhabited by the ancestors of contemporary Kurgan Bashkirs.[citation needed] 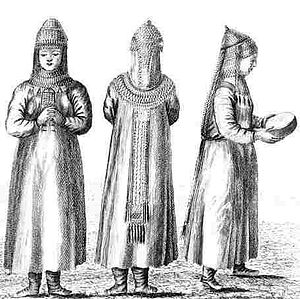 In the late 16th and early 19th centuries Bashkirs occupied the territory from the left bank of the Volga on the south-west to the riverheads of Tobol in the east, from the river Sylva in the north, to the middle stream of the Yaik in the south, in the Middle and Southern Urals, in Cis-Urals, including Volga territory and Trans-Urals.

In the middle of the 16th century, Bashkirs joined the Russian state. Previously they formed parts of the Nogai, Kazan, Sibir, and partly, Astrakhan khanates. Charters of Ivan the Terrible to Bashkir tribes became the basis of their contractual relationship with the tsar’s government. Primary documents pertaining to the Bashkirs during this period have been lost, some are mentioned in the (shezhere) family trees of the Bashkir. 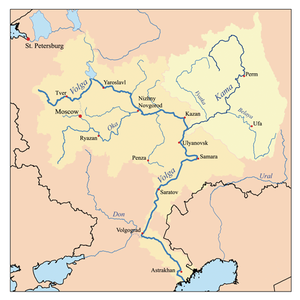 The main settlement area of the Bashkirs in the late 18th century extends over the Kama, Volga, Samara and Tobol Rivers 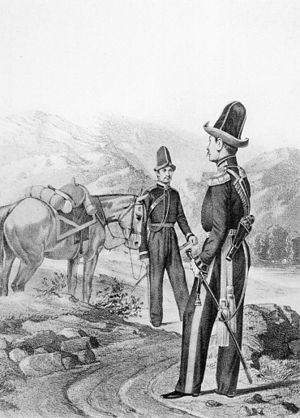 The third insurrection occurred in 1735, at the time of the foundation of Orenburg, and it lasted for six years. From at least the time of Peter the Great there had been talk of pushing southeast toward Persia and India. Ivan Kirillov drew up a plan to build a fort to be called Orenburg at Orsk at the confluence of the Or River and the Ural River southeast of the Urals where the Bashkir, Kalmyk and Kazakh lands join. Work was started at Orsk in 1735, but by 1743 'Orenburg' was moved about 250 km west to its present location. The next planned step was to build a fort on the Aral Sea. This would involve crossing the Bashkir country and then the lands of the Kazakh Lesser Horde, some of whom had recently offered a nominal submission.

Kirillov's plan was approved on May 1, 1734 and he was placed in command. He was warned that this would provoke a Bashkir rebellion, but the warnings were ignored. He left Ufa with 2,500 men in 1735 and fighting started on the first of July. The war consisted of many small raids and complex troop movements, so it cannot be easily summarized. For example: In the spring of 1736 Kirillov burned 200 villages, killed 700 in battle and executed 158. An expedition of 773 men left Orenburg in November and lost 500 from cold and hunger. During, at Seiantusa the Bashkir planned to massacre sleeping Russian. The ambush failed. One thousand villagers, including women and children, were put to the sword and another 500 driven into a storehouse and burned to death. Raiding parties then went out and burned about 50 villages and killed another 2,000. Eight thousand Bashkirs attacked a Russian camp and killed 158, losing 40 killed and three prisoners who were promptly hanged. Rebellious Bashkirs raided loyal Bashkirs. Leaders who submitted were sometimes fined one horse per household and sometimes hanged.

Bashkirs fought on both sides (40% of 'Russian' troops in 1740). Numerous leaders rose and fell. The oddest was Karasakal or Blackbeard who pretended to have 82,000 men on the Aral Sea and had his followers proclaim him 'Khan of Bashkiria'. His nose had been partly cut off and he had only one ear. Such mutilations are standard Imperial punishments. The Kazakhs of the Little Horde intervened on the Russian side, then switched to the Bashkirs and then withdrew. Kirillov died of disease during the war and there were several changes of commander. All this was at the time of Empress Anna of Russia and the Russo-Turkish War (1735–1739).

Although the history of the 1735 Bashkir War cannot be easily summarized, its results can be.

Later, in 1774, the Bashkirs, under the leadership of Salavat Yulayev, supported Pugachev's Rebellion. In 1786, the Bashkirs achieved tax-free status; and in 1798 Russia formed an irregular Bashkir army from among them. Residual land ownership disputes continued.

The Bashkirs lived between the Kama, Volga, Samara and Tobol Rivers. The Samara River extends from the hairpin curve of the Volga east to the base of the Urals. The Tobol is east of the Upper Ural River. Orsk is where the Ural turns westward. The Belaya River with the town of Ufa cuts through the center. 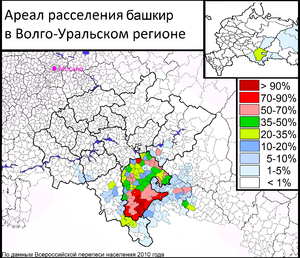 The area settled by the Bashkirs in the Idel-Ural region according to the national census of 2010.
Further information: Bashkir language and Bashkortostan

The ethnic Bashkir population is estimated at roughly 2 million people (2009 SIL Ethnologue), of which about 1.4 million speak the Bashkir language, a Turkic language of the Kypchak group. The Russian census of 2002 recorded 1.38 million Bashkir speakers in the Russian Federation. Most Bashkirs are bilingual in Bashkir and Russian.

The Bashkirs traditionally practiced agriculture, cattle-rearing and bee-keeping. The half-nomadic Bashkirs wandered either the mountains or the steppes, herding cattle.

Bashkir national dishes include a kind of gruel called öyrä and a cheese named qorot. Wild-hive beekeeping can be named as a separate component of the most ancient culture which is practiced in the same Burzyansky District near to the Shulgan-Tash cave.

«Ural-batyr» and «Akbuzat» are Bashkir national epics. Their plot concerns struggle of heroes against demonic forces. The peculiarity of them is that events and ceremonies described there can be addressed to a specific geographical and historical object –the Shulgan-Tash cave and its vicinities. 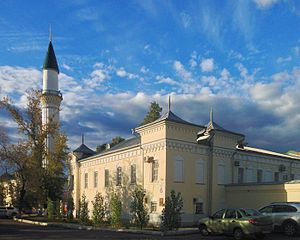 Caravanserai mosque in Orenburg, cultural monument of the Bashkir people, 1837—1844

In the pre-Islamic period the Bashkirs were followers of Tengrianism.[10][11]

Bashkirs began to convert to Islam from in the 9th century.[12] Arab traveler Ibn Fadlan in 921 met some of the Bashkirs, who were Muslims.[13] The final assertion of Islam among the Bashkirs occurred in the 1320s and 1330s (Golden Horde times). On the territory of Bashkortostan preserved the burial place of the first Imam of Historical Bashkortostan — ru, 14th-century building. In 1788 Catherine the Great established the "ru" in Ufa, which was the first Muslim administrative center in Russia.

In yearly 1990s began the religious revival among the Bashkirs.[14] According to Talgat Tadzhuddin there are more than 1,000 mosques in Bashkortostan in 2010.[15]

The Bashkirs are predominantly Sunni Muslims of the Hanafi madhhab.[5]

Regarding Y-DNA haplogroups, genetic studies have revealed that most Bashkir males belong to haplogroup R1b (R-M269 and R-M73) which is, on average, found at the frequency of 47,6 %. Following are the haplogroup R1a at the average frequency of 26.5%, and haplogroup N1c at 17%. In lower frequencies were also found haplogroups J2, C, O, E1b, G2a, L, N1b, I, T.[16] 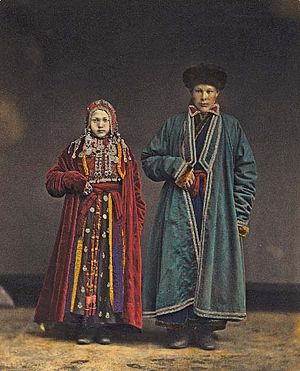 Because genetic studies have revealed that a majority of Bashkir males belong to Y-DNA Haplogroup R1b, which is otherwise concentrated in Western Europe, this has lent support to theories such as: