From Infogalactic: the planetary knowledge core
Jump to: navigation, search
Not to be confused with Chumash people.

The Chuvash people (Chuvash: чăваш; Russian: чуваши) are a Turkic ethnic group, native to an area stretching from the Volga Region to Siberia. Most of them live in Republic of Chuvashia and surrounding areas, although Chuvash communities may be found throughout the Russian Federation.

There is no universally accepted etymology of the word Chuvash, but there are three main theories that try to explain it:

Suvar
According to one theory, Chuvash is a Shaz-Turkic adaptation of Lir-Turkic Suvar, an ethnonym of people that are widely[citation needed] considered to be the ancestors of modern Chuvashes. Compare Lir-Turkic Chuvash: huran to Shaz-Turkic Tatar: qazan (‘cauldron’).
Jăvaš
Another theory suggests that the word Chuvash may be derived from Common Turkic jăvaš (‘friendly’, ‘peaceful’), as opposed to şarmăs (‘warlike’).
The Tabghach
An early medieval Xianbei clan and founders of the Northern Wei dynasty in China. The Old Turkic name Tabghach (Tuoba in Mandarin) was used by some Inner Asian peoples to refer to China long after this dynasty. Gerard Clauson has shown that through regular sound changes, the clan name Tabghach may have transformed to the ethnonym Chuvash.[13]

There are rival schools of thought on the origin of the Chuvash people. One is that they originated from a mixing between the Turkic Suar and Sabir tribes of Volga Bulgaria and also according to some researches with local Finno-Ugric populations.[14] Another is that the Chuvash are a remainder of the pre-Volga Bulgar population of the Volga region, Volga Bulgars and Mari people.[citation needed]

The closest ancestors of the Chuvashes seem to be the Turkic Volga Bulgars.[15] It cannot be absolutely proven that the Chuvashs are indeed direct descendants of the early Bolgars, but it is does seem very likely.[15] Naturally, they have been subjected to much infusion and influence, not only from Russian and Turkic peoples, but also from neighboring Finnic tribes, with whom they were persistently and mistakenly identified for centuries, perhaps aided by the fact that the Chuvash language is a highly divergent form of Turkic, and was not easily recognized as such.[15] Racially, the Chuvash seem to be a mixed Finnic and Turkic type.[15] 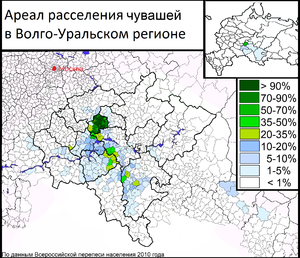 The Turkic ancestors of the Chuvash people are believed to have come from central Siberia, where they lived in the Irtysh basin (between the Tian Shan and Altay) from at least the end of the third millennium BC. In the beginning of the first century AD, the Bulgars started moving west through Zhetysu and the steppes of modern-day Kazakhstan, reaching the North Caucasus in 2nd-3rd centuries AD. There they established several states (Old Bulgaria on the Black Sea coast and the Suar Duchy in modern-day Daghestan). There is reason to believe[further explanation needed] that they were the central element of the Hun Empire under Attila.[citation needed]

Old Bulgaria broke up in the second half of the 7th century after a series of successful Khazar invasions. Some of its population fled north, to the Volga-Kama region, where they established Volga Bulgaria, which eventually became extremely wealthy: its capital being the 4th largest city in the world. Shortly after that, the Suvar Duchy was forced to become a vassal state of Khazaria. About half a century later, the Suvars took part in the Khazar-Arab Wars of 732-737.

They speak the Chuvash language and have some pre-Christian traditions. In addition to Chuvash,[16] many people also use the Russian language.

Chuvash people took great care of preserving their beliefs, their god being Tura.[citation needed] To prevent an onslaught of Orthodox Christianity and Islam, they separated themselves from other surrounding ethnic groups, which brought on several centuries of endogamy. Today Chuvash people are partially Orthodox Christians and belong to the Russian Orthodox Church. They retain some pre-Christian (or pagan) traditions in their cultural activities. A Pagan revival has taken place since the fall of the Soviet Union under the name Vattisen Yaly.