From Infogalactic: the planetary knowledge core
Jump to: navigation, search
For the language spoken by this ethnic group, see Kyrgyz language.

The Kyrgyz people (also spelled Kyrghyz and Kirghiz) are a Turkic nation that live primarily in Kyrgyzstan.

There are several theories on the origin of ethnonym Kyrgyz. It can be derived from the Turkic word kyrk ("forty"), with -iz being an old plural suffix, so Kyrgyz literally means "a collection of forty tribes".[13]

Kyrgyz also means "imperishable", "inextinguishable", "immortal", "unconquerable" or "unbeatable", presumably referring to the epic hero Manas, who – as legend has it – unified the forty tribes against the Khitans.

The Chinese transcription Tse-gu (Gekun, Jiankun) allows to restore the pronunciation of the ethnonym as Kirkut (Kirgut) and Kirkur (Kirgur). Both forms go back to the earliest variation Kirkün (Chinese Tszyan-kun) of the term "Kyrgyz", meaning "Field People", "Field Huns".

By the Mongol epoch, the initial meaning of the word Kirkun was already lost, evidenced by differing readings of the earlier reductions of the Yuán Shǐ. The change of ethnonym produced a new version of an origin, and the memory about their steppe motherland, recorded in the Yuán Shǐ, survived only as a recollection of the initial birthplace of forty women. Subsequently, however, that recollection was also lost.[14]

In the 18th and 19th century, European writers used the word Kirghiz (the early Anglicized form of the contemporary Russian киргизы) to refer not only to the people we now know as Kyrgyz, but also to their more numerous northern relatives, the Kazakhs. When distinction had to be made, more specific terms were used: the Kyrgyz proper were known as the Kara-Kirghiz ("Black Kirghiz" for their tents' colour),[15] and the Kazakhs were named the Kaisaks[16][17] or "Kirghiz-Kazaks".[15] 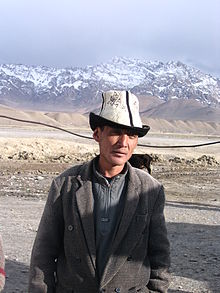 A Kyrgyz around Murghab, in the Pamirs of Tajikistan. 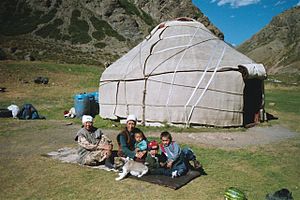 The early Kyrgyz people, known as Yenisei Kyrgyz, have their origins in the western parts of modern-day Mongolia and first appear in written records in the Chinese annals of the Sima Qian's Records of the Grand Historian (compiled 109 BC to 91 BC), as Gekun (鬲昆, 隔昆) or Jiankun (堅昆). They were described in Tang Dynasty texts as having "red hair and green eyes", while those with dark hair and eyes were said to be descendants of a Chinese general Li Ling.[18] In Chinese sources, these Kyrgyz tribes were described as fair-skinned, green- or blue-eyed and red-haired people with a mixture of European and Mongol features.[19][20][21][22] The Middle Age Chinese composition Tanghuiyao of the 8–10th century transcribed the name "Kyrgyz" as Tsze-gu (Kirgut), and their tamga was depicted as identical to the tamga of present-day Kyrgyz tribes Azyk, Bugu, Cherik, Sary Bagysh and few others.[23]

In 840 a revolt led by the Yenisei Kyrgyz brought down the Uyghur Khaganate, and brought the Yenisei Kyrgyz to a dominating position in the former Turkic Khaganate. With the rise to power, the center of the Kyrgyz Khaganate moved to Jeti-su, and brought about a spread south of the Kyrgyz people, to reach Tian Shan mountains and Xinjiang, bringing them into contact with the existing peoples of western China, especially Tibet. By the 16th century the carriers of the ethnonym Kirgiz lived in South Siberia, Xinjiang, Tian Shan, Pamir-Alay, Middle Asia, Urals (among Bashkorts), in Kazakhstan.[25] In the Tian Shan and Xinjiang area, the term Kyrgyz retained its unifying political designation, and became a general ethnonym for the Yenisei Kirgizes and aboriginal Turkic tribes that presently constitute the Kyrgyz population.[26] Though it is obviously impossible to directly identify the Yenisei and Tien Shan Kyrgyz, a trace of their ethnogenetical connections is apparent in archaeology, history, language and ethnography. A majority of modern researchers came to the conclusion that the ancestors of Kyrgyz tribes had their origin in the most ancient tribal unions of Sakas and Usuns, Dinlins, Mongols and Huns.[27]

Also, there follow from the oldest notes about the Kyrgyz that the definite mention of Kyrgyz ethnonym originates from the 6th century. There is certain probability that there was relation between Kyrgyz and Gegunese already in the 2nd century BC, next, between Kyrgyz and Khakases since the 6th century A.D., but there is quite missing a unique mention. The Kyrgyz as ethnic group are mentioned quite unambiguously in the time of Genghis Khan rule (1162–1227), when their name replaces the former name Khakas.[28] 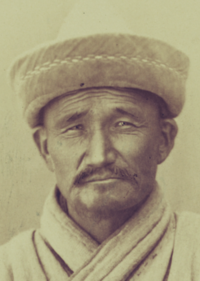 The genetic makeup of the Kyrgyz is consistent with their origin as a mix of tribes.[29][30] For instance, 63% of modern Kyrgyz men of Jumgal District[31] share Haplogroup R1a1 (Y-DNA) with Ishkashimis (68%),[29] Tajiks of Panjikent[32] (64%, three times more than other Tajiks[33]), Pashtuns (51%),[34] and Bartangis (40%).[29][35] Low diversity of Kyrgyz R1a1 indicates a founder effect within the historical period.[32] Other groups of Kyrgyz show considerably lower haplogroup R frequencies and almost lack haplogroup N.[36]

Because of the processes of migration, conquest, intermarriage, and assimilation, many of the Kyrgyz peoples who now inhabit Central and Southwest Asia are of mixed origins, often stemming from fragments of many different tribes, though they speak closely related languages.[39] They are considered to be a people that were created by a combination of Mongol, Khitan, and Uyghur tribes. They generally have an East Asian appearance like their neighbours the Kazakhs, and in contrast to the mostly Caucasoid Tajiks and the mixed-looking Uzbeks.

The Kyrgyz state reached its greatest extent after defeating the Uyghur Khaganate in 840 AD, in alliance with the Chinese Tang dynasty.

The Kirghiz khagans of the Yenisei Kirghiz Khaganate claimed descent from the Han Chinese general Li Ling (general), which was mentioned in the diplomatic correspondence between the Kirghiz khagan and the Tang Dynasty emperor, since the Tang imperial Li family claimed descent from Li Ling's grandfather, Li Guang. The Kirghiz qaghan assisted the Tang dynasty in destroying the Uyghur Khaganate and rescuing the Princess Taihe from the Uyghurs. They also killed a Uyghur khagan in the process.

Then Kyrgyz quickly moved as far as the Tian Shan range and maintained their dominance over this territory for about 200 years. In the 12th century, however, Kyrgyz domination had shrunk to the Altai and Sayan Mountains as a result of Mongol expansion. With the rise of the Mongol Empire in the 13th century, the Kyrgyz migrated south. In 1207, after the establishment of Yekhe Mongol Ulus (Mongol empire), Genghis Khan's oldest son Jochi occupied Kyrgyzstan without resistance. The state remained a Mongol vassal until the late 14th century.

Various Turkic peoples ruled them until 1685, when they came under the control of the Oirats (Dzungars). 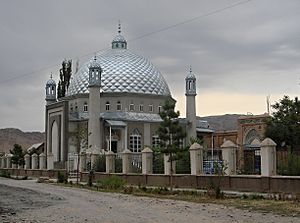 A mosque in Tokmok, Kyrgyzstan
Further information: Islam in Kyrgyzstan

Kyrgyz are predominantly Muslims of the Hanafi Sunni school.[40] Islam was first introduced by Arab traders who travelled along the Silk Road in the seventh and eighth century. In the 8th century, orthodox Islam reached the Fergana valley with the Uzbeks. However, in the tenth-century Persian text Hudud al-'alam, the Kyrgyz was still described as a people who "venerate the Fire and burn the dead".[41]

Atheism has some following in the northern regions under Russian communist influence. As of today, few cultural rituals of Shamanism are still practiced alongside Islam, particularly in Central Kyrgyzstan. During a July 2007 interview, Bermet Akayeva, the daughter of Askar Akayev, the former President of Kyrgyzstan, stated that Islam is increasingly taking root, even in the northern portion which came under communist influence.[42] She emphasized that many mosques have been built and that the Kyrgyz are "increasingly devoting themselves to Islam."[42][not in citation given]

Many ancient indigenous beliefs and practices, including shamanism and totemism, coexisted synthetically with Islam. Shamans, most of whom are women, still play a prominent role at funerals, memorials, and other ceremonies and rituals. This split between the northern and southern Kyrgyz in their religious adherence to Muslim practices can still be seen today. Likewise, the Sufi order of Islam has been one of the most active Muslim groups in Kyrgyzstan for over a century.

The Kyrgyz population of Afghanistan was 1,130 in 2003, all from eastern Wakhan District in the Badakhshan Province of northeastern Afghanistan.[6] They still lead a nomadic lifestyle and are led by a khan or tekin.

The suppression of the 1916 rebellion against Russian rule in Central Asia caused many Kyrgyz later to migrate to China and Afghanistan. Most of the Kyrgyz refugees in Afghanistan settled in the Wakhan region. Until 1978, the northeastern portion of Wakhan was home to about 3–5 thousand ethnic Kyrgyz.[43][44] In 1978, most Kyrgyz inhabitants fled to Pakistan in the aftermath of the Saur Revolution. They requested 5,000 visas from the United States consulate in Peshawar for resettlement in Alaska, a state of the USA which they thought might have a similar climate and temperature with the Wakhan Corridor. Their request was denied. In the meantime, the heat and the unsanitary conditions of the refugee camp were killing off the Kyrgyz refugees at an alarming rate. Turkey, which was under the military coup rule of General Kenan Evren, stepped in, and resettled the entire group in the Lake Van region of Turkey in 1982. The village of Ulupamir (or “Great Pamir” in Kyrgyz) in Erciş in Van Province was given to these, where more than 5,000 of them still reside today. The documentary film 37 Uses for a Dead Sheep – the Story of the Pamir Kirghiz was based on the life of these Kyrgyz in their new home.[45] Some Kyrgyz returned to Wakhan in October 1979, following the Soviet occupation of Afghanistan.[46] 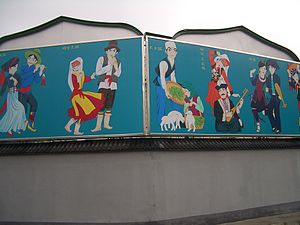 China's Kyrgyz people (柯尔克孜族) portrayed on a poster near the Niujie Mosque in Beijing. (Fourth from the left, between the Dongxiang and the Kam).

The Kyrgyz form one of the 56 ethnic groups officially recognized by the People's Republic of China. There are more than 145,000 Kyrgyz in China. They are known in China as Kēěrkèzī zú (simplified Chinese: 柯尔克孜族; traditional Chinese: 柯爾克孜族).

In the 19th century, Russian settlers on traditional Kirghiz land drove a lot of the Kirghiz over the border to China, causing their population to increase in China.[47] Compared to Russian controlled areas, more benefits were given to the Muslim Kirghiz on the Chinese controlled areas. Russian settlers fought against the Muslim nomadic Kirghiz, which led the Russians to believe that the Kirghiz would be a liability in any conflict against China. The Muslim Kirghiz were sure that in an upcoming war, that China would defeat Russia.[48]

The Kirghiz of Xinjiang revolted in the 1932 Kirghiz rebellion, and also participated in the Battle of Kashgar (1933) and again in 1934.

They are found mainly in the Kizilsu Kirghiz Autonomous Prefecture in the southwestern part of the Xinjiang Uygur Autonomous Region, with a smaller remainder found in the neighboring Wushi (Uqturpan), Aksu, Shache (Yarkand), Yingisar, Taxkorgan and Pishan (Guma), and in Tekes, Zhaosu (Monggolkure), Emin (Dorbiljin), Bole (Bortala), Jinghev (Jing) and Gongliu County in northern Xinjiang.[49]

A peculiar group, also included under the "Kyrgyz nationality" by the PRC official classification, are the so-called "Fuyu Kyrgyz". It is a group of several hundred Yenisei Kirghiz (Khakas people) people whose forefathers were relocated from the Yenisei river region to Dzungaria by the Dzungar Khanate in the 17th century, and upon defeat of the Dzungars by the Qing dynasty, they were relocated from Dzungaria to Manchuria in the 18th century, and who now live in Wujiazi Village in Fuyu County, Heilongjiang Province. Their language (the Fuyü Gïrgïs dialect) is related to the Khakas language. 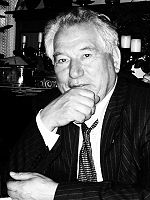