Kumyks (Kumyk: къумукълар, qumuqlar, Russian: кумыки) are a Turkic people living in the Kumyk plateau in north Dagestan and south Terek, and the lands bordering the Caspian Sea. They comprise 14% of the population of the Russian republic of Dagestan. They speak the Kumyk language. Kumyks practice folk Islam, with some religious rituals that trace back to pre-Islamic times. 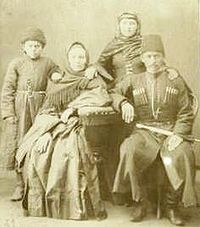 Some historians have speculated that the Kumyks may be descendants of the Khazars, such as the Hungarian historian Ármin Vámbéry, who believed that they settled in their present territory during the flourishing period of the Khazar Khaganate in the 8th century.

During the 16th, 17th, and 18th centuries CE the Kumyks had an independent kingdom, based at Tarki, and ruled by a leader called a Shamkhal.

The Russians built forts in their territory in 1559 and under Peter I. The upper terraces of the Kumyk plateau, which the Kumyks occupy (leaving its lower parts to the Nogais) are very fertile.

In recent years Kumyk nationalists such as Salau Aliev have agitated for Kumyk dominance within Daghestan, citing Khazar history as their inspiration. This is part of a wider trend in Dagestan of the non-dominant but still major groups (such as Kumyks, Lezgins, Laks, etc.) producing ideological backlashes to the near-institutionalized dominance of Avars, Dargins and Russians in Dagestan (together, Avars, Dargins and Russians form a weak majority of the population, but their dominance is widely resented by others).

Islam spread among the Kumyks between the eight and twelfth centuries. Christianity had been widespread prior to this and, among the upper class of Khazaria, Judaism. Not many old beliefs have been preserved, and the institution of shamanism as such is virtually nonexistent among the Kumyks. Folklore and ethnographic material, however, indicate that Kumyk tribes worshiped the high god Tengiri and the patrons of the sun, moon, earth, water, and so on. There are surviving heroic poems, narratives, and ritual songs concerning, among others, the demon Albaslï (a woman with huge breasts thrown over her shoulders, who might injure women giving birth); Suv-anasï, the "mother of water"; the three demons Temirtösh, Baltatösh, and Qïlïchtösh (with ax blades protruding from their chests with which they kill people); Sütqatïn, a goddess or spirit of the rain; Basdïrïq, who could suffocate people in their sleep; and a gluttonous figure. The subsequent spread of Islam often transformed or provided an overlay to the pagan beliefs.

In houses of the older type great significance was attached to the carving of the wooden parts of houses: beams, pillars, clothes closets, shutters, the frames of windows and gates, and the like. Stone slabs with traditional carvings and inscriptions were inserted in the walls of porches or gates. Clay decorations were placed on niches, apertures, cornices, and fireplaces. The spacing of decorations was based on the native sense of decorative rhythms. Daggers, pistols, sabers, and rifles were covered with various decorations with gold or silver mounting. Female attire, particularly that of girls, was decorated with gold and silver galloons or lace, or artfully realized gilded pectorals.

Kumyk literature began to develop in the fourteenth and fifteenth centuries but reached a more significant development at the turn of the nineteenth century when poets such as A. Qaqashurinsky, Y Qazaq, and M. Osmanov appeared. Major contributions to Daghestan Soviet literature were made by A. Salavadov, A. Magomedov, A. Adzhiev, and many others.

The Kumyk people have created highly artistic forms of folklore. Their heroic epics include the ancient "Song of Minküllü," similar to the Gilgamesh epic; the "Song of Kartkozhak and Maksuman," a segment of the Kumyk Nart epic; and the "Song of Javatbi," in which, as in the Oghuz epic of Dede Korkut, the tale is told of the struggle of the hero with Azrail, the angel of death. Poetry of the yearly cycle includes songs for bringing rain ("Zemire," "Sütqatïn"), for meeting autumn ("Güdürbay," "Hüssemey") and spring ("Navruz"), and family-ritual songs: wedding songs and laments. Children's literature is also significantly developed, as are myths, legends, and tales. The epics include songs of legendary heroes such as Aigazi, Abdulla, and Eldarush and the heroes of the anti-colonial and anticzarist struggles of the nineteenth century. To the relatively late genres of Kumyk folklore belong the songs about the freedom-loving Cossack warriors, the takmaks and sarïns (quatrains used in verbal dueling), amatory verse, and humorous and other songs. The telling of proverbs and maxims also flowered.

Kumyk dance, which has about twenty variants, is related to Lezgin dance. Characteristic of its choreography are compositional precision, a clearly expressed manner of realization (powerful and masculine by the men; tranquil and proud by the women), a complex pattern, and a duple rhythm.

Vocal art is also highly developed, particularly the male polyphonic choir. Dances and songs are accompanied by a kumuz (a plucked string instrument), an accordion, or less often a wind instrument. Solo folk songs are also performed on these instruments.

Marriage and divorce were governed by Sharia (Quranic law). Marriage took place at age 15 or 16 (or later). A specially entrusted person ( arachï ) carried on the negotiations with the parents of the girl and, when the chances for a favorable courtship were good, matchmakers were sent. A kalim (bride-price) was paid for the bride, part of which went to her relatives and part to buy the dowry. In addition, the husband had to make a payment ( gebinhaq ) that guaranteed some security to the wife and children in case of divorce or the death of the husband. The betrothal was marked by formalities. To fix the conditions that had been accepted by both parties, something of value was given to the parents of the bride. The wedding was conducted with due pomp, and all the villagers were usually invited. The groom remained in the house of a close friend, where celebrations also took place, albeit in a narrower circle.

In the nineteenth century the basic domestic unit was the nuclear family, although there were also undivided families (and familial communes of twenty-five to thirty people). The natural growth of the family led to the segmentation of the commune, usually at the death of the head of the family. (The family head was usually the oldest man, but also one distinguished by his experience, a competent organizer, and a skillful worker—or, less commonly, a senior woman, who likewise enjoyed irrefutable authority.) New families consisting of three or four generations of relatives were headed by the sons of the deceased leader. All members of the family obeyed the head, but for important questions the main role was played by the family council, which was composed of adult men and some older, more experienced women. The family maintained and developed many-sided relations within the village commune, regulating the productive, sociopolitical, and cultural life of the village.

The severity of custom and the ascetic, spartan form of life, did not traditionally allow a man to take part in the raising of small children or to display parental feelings. The woman was occupied with the rearing of children, although, in the presence of strangers or outsiders, she, too, was expected not to caress her children or show her feelings. The education of boys differed from that of girls; it was instilled into a boy that he was called to defend those close to him in the future, to play an independent role in the family and in society, and to become a good worker in the fields. In the girl, on the other hand, a complaisant or obliging character was cultivated; she was taught to care for children and to do housework. All of this was realized by means of a native pedagogy involving instruction in work, play, ritual, and children's folklore.