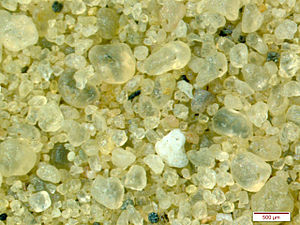 Quartz-rich sand from the Western Desert near Sakkara, Egypt

The Libyan Desert forms the northern and eastern part of the Sahara Desert and covers an area of approximately 1,100,000 square kilometres (420,000 sq mi). The desert extends approximately 1,100 km from east to west, and 1,000 km from north to south, in about the shape of a rectangle. The Libyan Desert covers eastern Libya, western Egypt, and northwestern Sudan. Like most of the Sahara Desert, this desert is primarily sand and hamada or stony plain. The Libyan Desert is one of the harshest parts of the bigger Sahara Desert. This is one of the sunniest and driest places on Earth; many decades may easily pass without seeing any rainfall at all and the sky is always cloudless, clear, and luminous. Extreme heat and extreme dryness both contribute to one of the highest levels of aridity found in the planet.

Sand plains, dunes, ridges, and some depressions (basins) typify the endorheic region, with no rivers draining into or out of the desert. The Gilf Kebir plateau reaches an altitude of just over 1,000 m, and along with the nearby massif of Jebel Uweinat is an exception to the uninterrupted territory of basement rocks covered by layers of horizontally bedded sediments, forming a massive sand plain, low plateaus, and dunes.

The desert features a striking diversity of landscapes including mountains such as Jebel Uweinat (1,980 m), the Gilf Kebir plateau, and sand seas (see below). The Libyan Desert is barely populated apart from the modern settlements at oases of the lower Cyrenaica region in southeastern Libya. The Farafra depression which includes the town of Farafra and the White Desert National Park is also located within this desert. The indigenous population are Bisharin tribe, Mahas, and Berber. In most of Upper Egypt, the desert is close to the Nile River, with a seasonal floodplain only a few kilometers wide between river and desert. Where the desert extends into Egypt and no longer in Libya, it is generally known as the "Western Desert". The term Western Desert contrasts with the Eastern Desert to the east of the Nile River, which lies between the Nile and the Red Sea.

North of the Gilf Kebir plateau, among the shallow peripheral dunes of the southern Great Sand Sea, is a field of Libyan desert glass. A specimen of the desert glass was used in a piece of Tutankhamun's ancient jewelry.

The three sand seas, which contain dunes up to 512 meters in height, cover approximately one quarter of the region. They include: 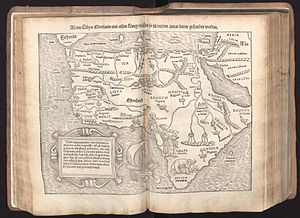 In this map of Africa from Sebastian Münster's Cosmographia (1545), the Libyan desert (marked Libyae desertum and Libya Interior) is shown in the center of the continent, west of Nubiae regnum, south of Regnum Tunis and east of Regnum Senegae.

In 1935, the famous French aviator/airline pilot Antoine de Saint-Exupéry crashed in the northern Libyan Desert.[1] After miraculously surviving, he and his plane's mechanic nearly died of thirst before being rescued by a nomad. This event is described in Exupéry's book Wind, Sand and Stars.

The wreck of the B-24 bomber Lady Be Good—discovered 200 km (120 mi) north of Kufra 15 years after it was reported missing during WWII—had a less happy ending. The crew bailed out believing they were over the sea, when their plane ran out of fuel, and they became lost. When they landed in the Libyan Desert they could feel a northwesterly breeze. Thinking they were near the Mediterranean, they headed into the wind hoping it would lead them to safety. However, they were more than 640 km inland from the Mediterranean, and slowly died from dehydration after covering 130 km with minimal water in a place so dry even the desert Bedouins refuse to enter.