From Infogalactic: the planetary knowledge core
(Redirected from Lollard)
Jump to: navigation, search 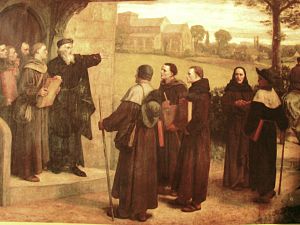 In this 19th-century illustration, John Wycliffe is shown giving the Bible translation that bore his name to his Lollard followers.

Lollardy (Lollardry, Lollardism) was a political and religious movement that existed from the mid-14th century to the English Reformation. It was initially led by John Wycliffe,[1] a prominent theologian who was dismissed from the University of Oxford in 1381 for criticism of the Church, especially in his doctrine on the Eucharist. The Lollards' demands were primarily for reform of Western Christianity. 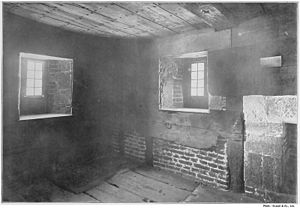 Lollard, Lollardi or Loller was the popular derogatory nickname given to those without an academic background, educated if at all only in English, who were reputed to follow the teachings of John Wycliffe in particular, and were certainly considerably energized by the translation of the Bible into the English language. By the mid-15th century, "lollard" had come to mean a heretic in general. The alternative, "Wycliffite", is generally accepted to be a more neutral term covering those of similar opinions, but having an academic background.

The term is said to have been coined by the Anglo-Irish cleric, Henry Crumpe, but its origin is uncertain. According to the Oxford English Dictionary, it most likely derives from Middle Dutch lollaerd "mumbler, mutterer" from a verb lollen "to mutter, mumble". It appears to be a derisive expression applied to various people perceived as heretics—first the Franciscans and later the followers of Wycliffe. Originally the word was a colloquial name for a group of the harmless buriers of the dead during the Black Death, in the 14th century, known as Alexians, Alexian Brothers or Cellites. These were known colloquially as lollebroeders (Middle Dutch), "mumbling brothers", or "Lollhorden", from Old High German: lollon, meaning "to sing softly" from their chants for the dead.[2]

Three other possibilities for the derivation of Lollard are mentioned by the Oxford English Dictionary,[3] 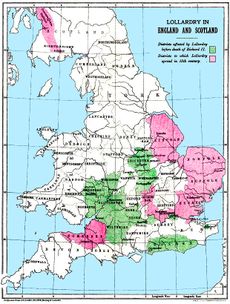 One group of Lollards petitioned Parliament with The Twelve Conclusions of the Lollards by posting them on the doors of Westminster Hall in February 1395. While by no means a central authority of the Lollards, the Twelve Conclusions reveal certain basic Lollard ideas. The first Conclusion rejects the acquisition of temporal wealth by Church leaders as accumulating wealth leads them away from religious concerns and toward greed. The fourth Conclusion deals with the Lollard view that the Sacrament of Eucharist is a contradictory topic that is not clearly defined in the Bible. Whether the bread remains bread or becomes the literal body of Christ is not specified uniformly in the gospels. The sixth Conclusion states that officials of the Church should not concern themselves with secular matters when they hold a position of power within the Church because this constitutes a conflict of interest between matters of the spirit and matters of the State. The eighth Conclusion points out the ludicrousness, in the minds of Lollards, of the reverence that is directed toward images of Christ's suffering. "If the cross of Christ, the nails, spear, and crown of thorns are to be honoured, then why not honour Judas's lips, if only they could be found?"[5]

The Lollards stated that the Catholic Church had been corrupted by temporal matters and that its claim to be the true church was not justified by its heredity. Part of this corruption involved prayers for the dead and chantries. These were seen as corrupt since they distracted priests from other work and that all should be prayed for equally. Lollards also had a tendency toward iconoclasm. Expensive church artwork was seen as an excess; they believed effort should be placed on helping the needy and preaching rather than working on expensive decorations. Icons were also seen as dangerous since many seemed to be worshiping the icons more than God.

Believing in a lay priesthood, the Lollards challenged the Church’s authority to invest or deny the divine authority to make a man a priest. Denying any special status to the priesthood, Lollards thought confession to a priest was unnecessary since according to them priests did not have the ability to forgive sins. Lollards challenged the practice of clerical celibacy and believed priests should not hold government positions as such temporal matters would likely interfere with their spiritual mission. 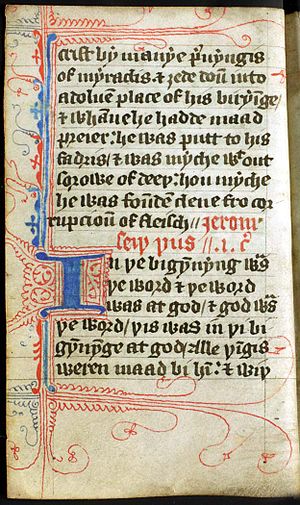 At first, although Lollardy was denounced as a heresy, Wycliffe and the Lollards were sheltered by John of Gaunt and other anti-clerical nobility, who may have wanted to use Lollard-advocated clerical reform to acquire new sources of revenue from England’s monasteries. The University of Oxford also protected Wycliffe and similar academics on the grounds of academic freedom and, initially, allowed such persons to retain their positions despite their controversial views. Lollards first faced serious persecution after the Peasants' Revolt in 1381. While Wycliffe and other Lollards opposed the revolt, one of the peasants’ leaders, John Ball, preached Lollardy. The royalty and nobility then found Lollardy to be a threat not only to the Church, but to English society in general. The Lollards' small measure of protection evaporated. This change in status was also affected by the 1386 departure of John of Gaunt who left England to pursue the Crown of Castile.

A group of gentry active during the reign of Richard II (1377–99) were known as "Lollard Knights" either during or after their lives due to their acceptance of Wycliffe's claims. Henry Knighton, in his Chronicle, identifies the principal Lollard Knights as Thomas Latimer, John Trussel, Lewis Clifford, John Peachey, Richard Storey, and Reginald Hilton. Thomas Walsingham's Chronicle adds William Nevil and John Clanvowe to the list, and other potential members of this circle have been identified by their wills, which contain Lollard-inspired language about how their bodies are to be plainly buried and permitted to return to the soil whence they came. There is little indication that the Lollard Knights were specifically known as such during their lifetimes; they were men of discretion, and unlike Sir John Oldcastle years later, rarely gave any hint of open rebellion. However, they displayed a remarkable ability to retain important positions without falling victim to the various prosecutions of Wycliffe's followers occurring during their lifetimes.

Religious and secular authorities strongly opposed Lollardy. A primary opponent was Thomas Arundel, Archbishop of Canterbury, assisted by bishops like Henry le Despenser of Norwich, whom the chronicler Thomas Walsingham praised for his zeal.[6] King Henry IV (despite being John of Gaunt's son) passed the De heretico comburendo in 1401, which did not specifically ban the Lollards, but prohibited translating or owning the Bible and authorised burning heretics at the stake. 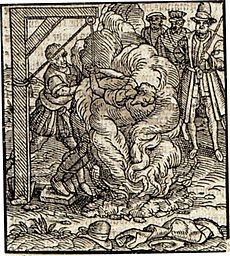 Sir John Oldcastle being burnt for insurrection and Lollard heresy.

By the early 15th century, stern measures were undertaken by Church and state which drove Lollardy underground. One such measure was the 1410 burning at the stake of John Badby, a layman and craftsman who refused to renounce his Lollardy. He was the first layman executed in England for the crime of heresy.

Sir John Oldcastle, a close friend of King Henry V (and the basis for Falstaff in the Shakespearean history Henry IV), was brought to trial in 1413 after evidence of his Lollard beliefs was uncovered. Oldcastle[7] escaped from the Tower of London and organized an insurrection, which included an attempted kidnapping of the king. The rebellion failed, and Oldcastle was executed. Oldcastle's revolt made Lollardy seem even more threatening to the state, and persecution of Lollards became more severe. A variety of other martyrs for the Lollard cause were executed during the next century, including the Amersham Martyrs in the early 1500s and Thomas Harding in 1532, one of the last Lollards to be made victim. A gruesome reminder of this persecution is the 'Lollards Pit' in Thorpe Wood, now Thorpe Hamlet, Norwich, Norfolk, where men are customablie burnt.[8]

Lollards were effectively absorbed into Protestantism during the English Reformation, in which Lollardy played a role. Since Lollards had been underground for more than a hundred years, the extent of Lollardy and its ideas at the time of the Reformation is uncertain and a point of debate. Ancestors of Blanche Parry (the closest person to Queen Elizabeth I for 56 years) and of Lady Troy (who raised Edward VI and Elizabeth I) had Lollard connections.[9] However, many critics of the Reformation, including Thomas More, associated Protestants with Lollards. Leaders of the English Reformation, including Archbishop Thomas Cranmer, referred to Lollardy as well, and Bishop Cuthbert of London called Lutheranism the "foster-child" of the Wycliffite heresy.[10] Scholars debate whether Protestants actually drew influence from Lollardy or whether they referred to it to create a sense of tradition.

Despite the debate about the extent of Lollard influence there are ample records of the persecution of Lollards from this period. In the Diocese of London there are records of about 310 Lollards being prosecuted or forced to abjure between 1510 and 1532. In Lincoln 45 cases against Lollardy were heard in 1506-1507 and in 1521 there were 50 abjurations and 5 burnings of Lollards. In 1511 Archbishop Warham presided over the abjuration of 41 Lollards from Kent and the burning of 5. [11]

The extent of Lollardy in the general populace at this time is unknown, but the prevalence of Protestant iconoclasm in England suggests Lollard ideas may still have had some popular influence if Zwingli was not the source, as Lutherans did not advocate iconoclasm. Lollards were persecuted again between 1554 and 1559 during the Revival of the Heresy Acts, under the Catholic Queen Mary, which specifically suppressed heresy and Lollardy.

The similarity between Lollards and later English Protestant groups such as the Baptists, Puritans, and Quakers also suggests some continuation of Lollard ideas through the Reformation.

Representations in art and literature

The Church used art as an anti-Lollard weapon. Lollards were represented as foxes dressed as monks or priests preaching to a flock of geese on misericords.[12] These representations alluded to the story of the preaching fox found in popular Medieval literature such as The History of Reynard the Fox and The Shifts of Raynardine (the son of Raynard). The fox lured the geese closer and closer with its words until it was able to snatch a victim to devour. The moral of this story was that foolish people are seduced by false doctrines.