Lyric poetry is a form of poetry which expresses personal emotions or feelings, typically spoken in the first person.[1] The term derives from a form of Ancient Greek literature, the lyric, which was defined by its musical accompaniment, usually on a stringed instrument known as a lyre.[2] The term owes its importance in literary theory to the division developed by Aristotle between three broad categories of poetry: lyrical, dramatic and epic.

Much lyric poetry depends on regular meter based either on number of syllables or on stress. The most common meters are as follows:

Some forms have a combination of meters, often using a different meter for the refrain. 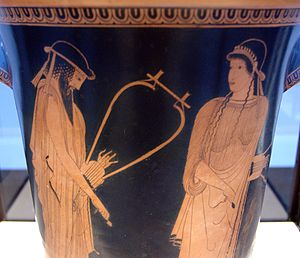 Alcaeus and Sappho depicted on an Attic red-figure kalathos c. 470 BC[4]

For the ancient Greeks, lyric poetry had a precise technical meaning: verse that was accompanied by a lyre, cithara, or barbitos. Because such works were typically sung, it was also known as melic poetry. The lyric or melic poet was distinguished from the writer of plays (although Athenian drama included choral odes, in lyric form), the writer of trochaic and iambic verses (which were recited), the writer of elegies (accompanied by the flute, rather than the lyre) and the writer of epic.[5] The scholars of Hellenistic Alexandria created a canon of nine lyric poets deemed especially worthy of critical study. These archaic and classical musician-poets included Sappho, Alcaeus, Anacreon and Pindar. Archaic lyric was characterized by strophic composition and live musical performance. Some poets, like Pindar extended the metrical forms to a triad, including strophe, antistrophe (metrically identical to the strophe) and epode (whose form does not match that of the strophe).[6]

Among the major extant Roman poets of the classical period, only Catullus (N° 11, 17, 30, 34, 51, 61) and Horace (Odes) wrote lyric poetry, which however was no longer meant to be sung but instead read or recited. What remained were the forms, the lyric meters of the Greeks adapted to Latin. Catullus was influenced by both archaic and Hellenistic Greek verse and belonged to a group of Roman poets called the Neoteroi ("New Poets") who spurned epic poetry following the lead of Callimachus. Instead, they composed brief, highly polished poems in various thematic and metrical genres. The Roman love elegies of Tibullus, Propertius, and Ovid (Amores, Heroides), with their personal phrasing and feeling, may be the thematic ancestor of much medieval, Renaissance, Romantic, and modern lyric poetry, but these works were composed in elegiac couplets and so were not lyric poetry in the ancient sense.[7]

During China's Warring States period, the Songs of Chu collected by Qu Yuan and Song Yu defined a new form of poetry that came from the exotic Yangtze Valley, far from the Wei and Yellow River homeland of the traditional four-character verses collected in the Book of Songs. The varying forms of the new Chu ciprovided more rhythm and greater latitude of expression.[9]

Originating in 10th-century Persian, a ghazal is a poetic form consisting of couplets that share a rhyme and a refrain. Formally, it consists of a short lyric composed in a single meter with a single rhyme throughout. The central subject is love. Notable authors include Hafiz, Amir Khusro, Auhadi of Maragheh, Alisher Navoi, Obeid e zakani, Khaqani Shirvani, Anvari, Farid al-Din Attar, Omar Khayyam, and Rudaki. The ghazal was introduced to European poetry in the early 19th century by the Germans Schlegel, Von Hammer-Purgstall, and Goethe, who called Hafiz his "twin".[10]

Lyric in European literature of the medieval or Renaissance period means a poem written so that it could be set to music—whether or not it actually was. A poem's particular structure, function, or theme might all vary.[11] The lyric poetry of Europe in this period was created by the pioneers of courtly poetry and courtly love largely without reference to the classical past.[12] The troubadors, travelling composers and performers of songs, began to flourish towards the end of the 11th century and were often imitated in successive centuries. Trouvères were poet-composers who were roughly contemporary with and influenced by the troubadours but who composed their works in the northern dialects of France. The first known trouvère was Chrétien de Troyes (fl. 1160s–80s). The dominant form of German lyric poetry in the period was the minnesang, "a love lyric based essentially on a fictitious relationship between a knight and his high-born lady".[13] Initially imitating the lyrics of the French troubadours and trouvères, minnesang soon established a distinctive tradition.[13] There was also a large body of medieval Galician-Portuguese lyric.[14] Hebrew singer-poets of the Middle Ages included Yehuda Halevi, Solomon ibn Gabirol, and Abraham ibn Ezra.

In Italy, Petrarch developed the sonnet form pioneered by Giacomo da Lentini and Dante's Vita Nuova. In 1327, according to the poet, the sight of a woman called Laura in the church of Sainte-Claire d'Avignon awoke in him a lasting passion, celebrated in the Rime sparse ("Scattered rhymes"). Later, Renaissance poets who copied Petrarch's style named this collection of 366 poems Il Canzoniere ("The Song Book"). Laura is in many ways both the culmination of medieval courtly love poetry and the beginning of Renaissance love lyric.

A bhajan or kirtan is a Hindu devotional song. Bhajans are often simple songs in lyrical language expressing emotions of love for the Divine. Notable authors include Kabir, Surdas, and Tulsidas.

Chinese Sanqu poetry was a Chinese poetic genre popular from the 12th-century Jin Dynasty through to the early Ming. Early 14th-century playwrights like Ma Zhiyuan and Guan Hanqing were well-established writers of Sanqu. Against the usual tradition of using Classical Chinese, this poetry was composed in the vernacular.[15]

Lyrical poetry was the dominant form of 17th-century English poetry from John Donne to Andrew Marvell.[16] The poems of this period were short. Rarely narrative, they tended towards intense expression.[16] Other notable poets of the era include Ben Jonson, Robert Herrick, George Herbert, Aphra Behn, Thomas Carew, John Suckling, Richard Lovelace, John Milton, Richard Crashaw, and Henry Vaughan. A German lyric poet of the period is Martin Opitz; in Japan, this was the era of the noted haiku-writer Matsuo Bashō.

In the 18th century, lyric poetry declined in England and France. The atmosphere of literary discussion in the English coffeehouses and French salons was not congenial to lyric poetry.[17] Exceptions include the lyrics of Robert Burns, William Cowper, Thomas Gray, and Oliver Goldsmith. German lyric poets of the period include Johann Wolfgang von Goethe, Novalis, Friedrich Schiller, and Johann Heinrich Voß. Kobayashi Issa was a Japanese lyric poet during this period. In Diderot's Encyclopédie, Louis chevalier de Jaucourt described lyric poetry of the time as "a type of poetry totally devoted to sentiment; that's its substance, its essential object." [18] 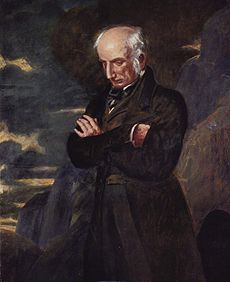 In Europe, the lyric emerged as the principal poetic form of the 19th century and came to be seen as synonymous with poetry.[19] Romantic lyric poetry consisted of first-person accounts of the thoughts and feelings of a specific moment; the feelings were extreme but personal.[20]

The traditional sonnet was revived in Britain, with William Wordsworth writing more sonnets than any other British poet.[19] Other important Romantic lyric writers of the period include Samuel Taylor Coleridge, John Keats, Percy Bysshe Shelley, and Lord Byron. Later in the century, the Victorian lyric was more linguistically self-conscious and defensive than the Romantic forms had been.[21] Such Victorian lyric poets include Alfred Lord Tennyson and Christina Rossetti.

Lyric poetry was popular with the German reading public between 1830 and 1890, as shown in the number of poetry anthologies published in the period.[22] According to Georg Lukács, the verse of Joseph von Eichendorff exemplified the German Romantic revival of the folk-song tradition initiated by Goethe, Herder, and Arnim and Bretano's Des Knaben Wunderhorn.[23]

France also saw a revival of the lyric voice during the 19th century.[24] The lyric became the dominant mode of French poetry during this period.[25] For Walter Benjamin, Charles Baudelaire was the last example of lyric poetry "successful on a mass scale" in Europe.[26]

In the early years of the 20th century rhymed lyric poetry, usually expressing the feelings of the poet, was the dominant poetic form in the United States,[29] Europe, and the British colonies. The English Georgian poets such as A. E. Housman, Walter de la Mare, and Edmund Blunden used the lyric form. The Bengali poet Rabindranath Tagore was praised by William Butler Yeats for his lyric poetry; Yeats compared him to the troubadour poets when the two met in 1912.[30]

The relevance and acceptability of the lyric in the modern age was, though, called into question by modernist poets such as Ezra Pound, T. S. Eliot, H.D., and William Carlos Williams, who rejected the English lyric form of the 19th century, feeling that it relied too heavily on melodious language, rather than complexity of thought.[31] After World War II, the American New Criticism returned to the lyric, advocating a poetry that made conventional use of rhyme, meter and stanzas, and was modestly personal in the lyric tradition.[32] Lyric poetry dealing with relationships, sex and domestic life constituted the new mainstream of American poetry in the late 20th century following the confessional poets of the 1950s and ’60s such as Sylvia Plath and Anne Sexton.[33]