Marin County is included in the San Francisco-Oakland-Hayward, CA Metropolitan Statistical Area. It is across the Golden Gate Bridge from San Francisco.

Marin County is well known for its natural beauty, liberal politics, and affluence. In May 2009, Marin County had the fifth highest income per capita in the United States at about $91,480.[6] The county is governed by the Marin County Board of Supervisors.

San Quentin Prison is located in the county, as is George Lucas' Skywalker Ranch. Autodesk, the publisher of AutoCAD, is also located there, as well as numerous other high-tech companies.

The Marin County Civic Center was designed by Frank Lloyd Wright and draws thousands of visitors a year to guided tours of its arch and atrium design. In 1994, a new county jail facility was embedded into the hillside nearby.[7] Marin County's natural sites include the Muir Woods redwood forest, the Marin Headlands, Stinson Beach, the Point Reyes National Seashore, and Mount Tamalpais.

Marin County is one of the original 27 counties of California, created February 18, 1850, following adoption of the California Constitution of 1849 and just months before the state was admitted to the Union.[9] 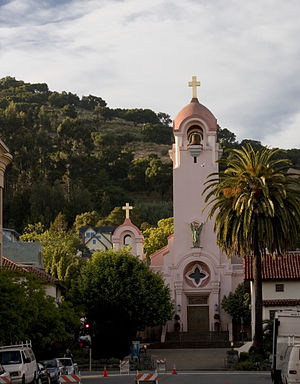 According to General Mariano Vallejo, who headed an 1850 committee to name California's counties, the county was named for "Marin", great chief of the tribe Licatiut". Marin had been named Huicmuse until he was baptized as "Marino" at about age 20. Marin / Marino was born into the Huimen people, a Coast Miwok tribe of Native Americans who inhabited the San Rafael area. Vallejo believed that "Chief Marin" had waged several fierce battles against the Spanish. Marino definitely did reside at Mission Dolores (in modern San Francisco) much of the time from his 1801 baptism and marriage until 1817, frequently serving as a baptism witness and godfather; he may have escaped and been recaptured at some point during that time. Starting in 1817, he served as an alcalde (in effect, an overseer) at the San Rafael Mission, where he lived from 1817 off and on until his death. In 1821, Marino served as an expedition guide for the Spanish for a couple of years before escaping and hiding out for some months in the tiny Marin Islands (also named after him); his recapture resulted in a yearlong incarceration at the Presidio before his return to the Mission San Rafael area for about 15 years until his death in 1839.[10]

Another version of the origin of the county name is that the bay between San Pedro Point and San Quentin Point was named Bahía de Nuestra Señora del Rosario la Marinera in 1775, and that Marin is simply an abbreviation of this name.[11]

The Coast Miwok Indians were hunters and gatherers whose ancestors had occupied the area for thousands of years. About 600 village sites have been identified in the county. The Coast Miwok numbered in the thousands. Today, there are few left and even fewer with any knowledge of their Coast Miwok lineage. Efforts are being made so that they are not forgotten.[12]

Francis Drake and the crew of the Golden Hind was thought to have landed on the Marin coast in 1579 claiming the land as Nova Albion. A bronze plaque inscribed with Drake's claim to the new lands, fitting the description in Drake's own account, was discovered in 1933. This so-called Drake's Plate of Brass was revealed as a hoax in 2003.[13]

In 1595 Sebastian Cermeno lost his ship, the San Agustin, while exploring the Marin Coast. The Spanish explorer Vizcaíno landed about twenty years after Drake in what is now called Drakes Bay. However the first Spanish settlement in Marin was not established until 1817 when Mission San Rafael Arcángel was founded partly in response to the Russian-built Fort Ross to the north in what is now Sonoma County.[citation needed] 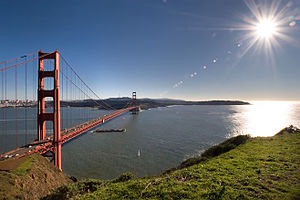 The view of the Golden Gate Bridge from the Marin Headlands 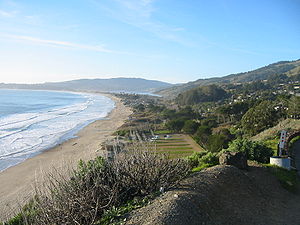 Geographically, the county forms a large, southward-facing peninsula, with the Pacific Ocean to the west, San Pablo Bay, and San Francisco Bay to the east, and – across the Golden Gate – the city of San Francisco to the south. Marin County's northern border is with Sonoma County.

Most of the county's population resides on the eastern side, with a string of communities running along San Francisco Bay, from Sausalito to Tiburon to Corte Madera to San Rafael. The interior contains large areas of agricultural and open space; West Marin, through which State Route 1 runs alongside the California coast, contains many small unincorporated communities whose economies depend on agriculture and tourism. West Marin has beaches which are popular destinations for surfers and tourists year-round. 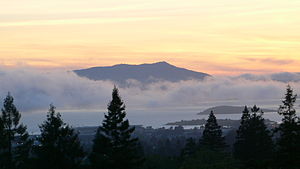 Mount Tamalpais is the highest peak in the Marin Hills and can be seen here from Berkeley, California 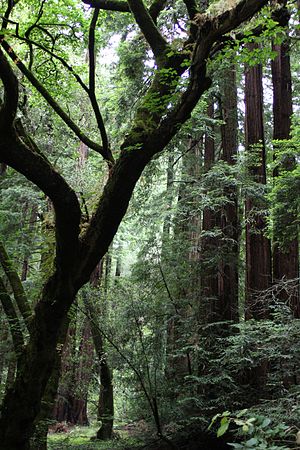 Muir Woods National Monument, which is located on the Pacific coast of southwestern Marin County, California

Notably, the Lagunitas Creek Watershed is home to the largest-remaining wild run of Coho salmon (Oncorhynchus kisutch) in Central California. These coho are part of the "Central California Coast Evolutionarily Significant Unit,[15]" or CCC ESU, and are listed as "endangered" at both the state and federal level.

Significant efforts to protect and restore these fish[16] have been underway in the Watershed since the 1980s. Fifty-percent of historical salmon habitat is now behind dams. Strong efforts are also being made to protect and restore undammed, headwater reaches of this Watershed in the San Geronimo Valley, where upwards of 40% of the Lagunitas salmon spawn each year and where as much as 1/3 of the juvenile salmon (or fry) spend their entire freshwater lives. The "Salmon Protection and Watershed Network"[17] leads winter tours for the public to learn about and view these spawning salmon, and also leads year-round opportunities for the public to get involved in stream restoration, monitoring spawning and smolt outmigration, juvenile fish rescue and relocation in the summer, and advocacy and policy development. Around 490 different species of birds have been observed in Marin County.[18]

Despite the lack of rain in the Marin County area due to historic drought levels,[19] in 2014, an estimated 20,000 juvenile Coho salmon made the migration from their spawning grounds in the Lagunitas Creek area to the Pacific ocean. This increase in migration was significantly up from the previous historic record for the same migration measured in 2006 at 11,000.[20]

According to the 2010 United States Census, the racial composition of Marin County was as follows:

According to the 2006–2008 American Community Survey, there were 16 ancestries in Marin County that made up over 1.0% of its population. The 16 ancestries are listed below: 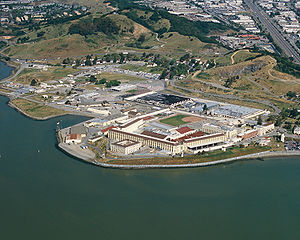 San Quentin State Prison of the California Department of Corrections and Rehabilitation is located in the county. San Quentin houses the male death row and the execution chamber of California.[42]

In the California State Legislature, Marin County is in:

For most of the 20th century, Marin County tended to vote Republican. From 1948 to 1980, the only Democrat to win there was Lyndon Johnson in 1964. However, the brand of Republicanism prevailing in Marin County was historically a moderate one. Like most of the historically Republican suburbs of the Bay Area, it became friendlier to Democrats as the GOP moved rightward nationally. In 1984, it narrowly voted for Walter Mondale and has supported the Democratic candidate in every presidential election since then. Since the 1990s, it has become one of the Democrats' major strongholds in both California and the nation. Out of California counties, only San Francisco County and Alameda County voted more Democratic in the 2008 Presidential election, all three counties voted more heavily for Democratic Presidential candidate Barack Obama than Cook County, Illinois, Obama's home county.

Marin has been slightly more competitive when voting for governor. In 2006 Arnold Schwarzenegger lost the county by just under 2,000 votes. Marin has voted for many gubernatorial candidates who went on to become high profile national figures including Richard Nixon, Ronald Reagan, Jerry Brown, and Dianne Feinstein.

On November 4, 2008, the citizens of Marin County voted strongly against Proposition 8, a constitutional amendment which eliminated the right of same-sex couples to marry, by a 75.1 percent to 24.9 percent margin. The official tally was 103,341 against and 34,324 in favor.[46] Only San Francisco County voted against the measure by a wider margin (75.2% against).[47]

In 2002, former U.S. President George H.W. Bush denounced convicted American Taliban associate John Walker Lindh as "some misguided Marin County hot-tubber," as a reference to the county's liberal, "hippie" political culture. Outraged by the label, some local residents wrote scathing letters to the Marin Independent Journal, complaining of Bush's remarks. In response, Bush wrote a letter to readers in the same newspaper, admitting regret and promising to not use the phrases Marin County and hot tub "in the same sentence again."[49] 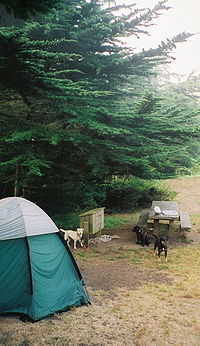 Golden Gate Transit provides service primarily along the U.S. 101 corridor, serving cities in Marin County, as well as San Francisco and Sonoma County. Service is also provided to Contra Costa County via the Richmond-San Rafael Bridge. Ferries to San Francisco operate from Larkspur and Sausalito. Ferry service from Tiburon is provided by Blue and Gold Fleet and by the Angel Island Ferry.

The Marin Airporter offers scheduled bus service to and from Marin County and the San Francisco Airport.

Marin County Free Library is the county library system. It is headquartered in San Rafael.[50] In addition, the Belvedere-Tiburon Library is located in Tiburon.

College of Marin, established in 1926, includes two campuses. The Kentfield Campus is located on 77 acres in Central Marin; the Indian Valley Campus is located on 333 acres in North Marin. The College offers more than 40 degree programs leading to an Associate of Arts or Associate of Science degree and over 20 Certificates of Achievement with various specialties. The College serves approximately 9,000 students each term. Approximately 5,700 students enroll in COM’s credit program. About 1,300 students enroll in English as a Second Language classes. Approximately 1,900 enroll in community education classes. The College employs about 300 permanent staff and faculty and many part-time employees.

As of 2011, the largest private-sector employers in Marin County were:[51]

The 2013 gross value of all agricultural production in Marin County was about $84 million; of this, more than $63 million was from the sale of livestock and their products (milk, eggs, wool, etc.).[52] Only 175 acres were planted to grapes.[53]

Marin County has been used as the venue for numerous films and books; in some cases, these works have also incorporated scenes set in neighboring San Francisco or Sonoma County. The following are representative works produced in whole or in part in Marin County: