French standard NF E 01-010 gives the following definition: “approach aiming at the synergistic integration of mechanics, electronics, control theory, and computer science within product design and manufacturing, in order to improve and/or optimize its functionality".

Many people treat "mechatronics" as a modern buzzword synonymous with "electromechanical engineering".[3][4] 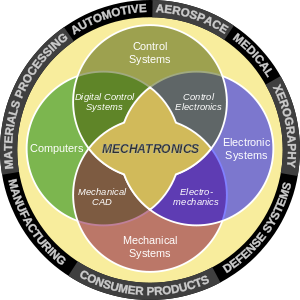 Engineering cybernetics deals with the question of control engineering of mechatronic systems. It is used to control or regulate such a system (see control theory). Through collaboration, the mechatronic modules perform the production goals and inherit flexible and agile manufacturing properties in the production scheme. Modern production equipment consists of mechatronic modules that are integrated according to a control architecture. The most known architectures involve hierarchy, polyarchy, heterarchy, and hybrid. The methods for achieving a technical effect are described by control algorithms, which might or might not utilize formal methods in their design. Hybrid systems important to mechatronics include production systems, synergy drives, planetary exploration rovers, automotive subsystems such as anti-lock braking systems and spin-assist, and everyday equipment such as autofocus cameras, video, hard disks, and CD players.

Mechanical modeling calls for modeling and simulating physical complex phenomenon in the scope of a multi-scale and multi-physical approach. This implies to implement and to manage modeling and optimization methods and tools, which are integrated in a systemic approach. The specialty is aimed at students in mechanics who want to open their mind to systems engineering, and able to integrate different physics or technologies, as well as students in mechatronics who want to increase their knowledge in optimization and multidisciplinary simulation technics. The specialty educates students in robust and/or optimized conception methods for structures or many technological systems, and to the main modeling and simulation tools used in R&D. Special courses are also proposed for original applications (multi-materials composites, innovating transducers and actuators, integrated systems, …) to prepare the students to the coming breakthrough in the domains covering the materials and the systems. For some mechatronic systems, the main issue is no longer how to implement a control system, but how to implement actuators. Within the mechatronic field, mainly two technologies are used to produce movement/motion.

Variant of the field

An emerging variant of this field is biomechatronics, whose purpose is to integrate mechanical parts with a human being, usually in the form of removable gadgets such as an exoskeleton. This is the "real-life" version of cyberware.

Another variant that we can consider is Motion control for Advanced Mechatronics, which presently is recognized as a key technology in mechatronics. The robustness of motion control will be represented as a function of stiffness and a basis for practical realization. Target of motion is parameterized by control stiffness which could be variable according to the task reference. However, the system robustness of motion always requires very high stiffness in the controller.[5]