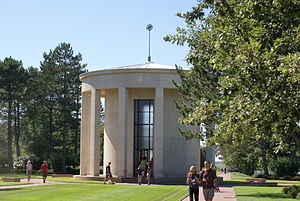 The Chapel at the cemetery

The Normandy American Cemetery and Memorial is a World War II cemetery and memorial in Colleville-sur-Mer, Normandy, France, that honours American troops who died in Europe during World War II.

On June 8, 1944, the U.S. First Army established the temporary cemetery, the first American cemetery on European soil in World War II.[1] After the war, the present-day cemetery was established a short distance to the east of the original site.

Like all other overseas American cemeteries in France for World War I and II, France has granted the United States a special, perpetual concession to the land occupied by the cemetery, free of any charge or any tax. This cemetery is managed by the American government, under Congressional acts that provide yearly financial support for maintaining them, with most military and civil personnel employed abroad. The U.S. flag flies over these granted soils.[1]

The cemetery is located on a bluff overlooking Omaha Beach (one of the landing beaches of the Normandy Invasion) and the English Channel. It covers 172 acres (70 ha), and contains the remains of 9,387 American military dead, most of whom were killed during the invasion of Normandy and ensuing military operations in World War II. Included are graves of Army Air Corps crews shot down over France as early as 1942 and three American women.

Only some of the soldiers who died overseas are buried in the overseas American military cemeteries. When it came time for a permanent burial, the next of kin eligible to make decisions were asked if they wanted their loved ones repatriated for permanent burial in the U.S., or interred at the closest overseas cemetery.

Notable burials at the cemetery include:

The names of 1,557 Americans who lost their lives in the Normandy campaign but could not be located and/or identified are inscribed on the walls of a semicircular garden at the east side of the memorial. This part consists of a semicircular colonnade with a loggia at each end containing maps and narratives of the military operations. At the center is a 22-foot bronze statue entitled The Spirit of American Youth Rising from the Waves. Facing west at the memorial, one sees in the foreground the reflecting pool, the mall with burial areas to either side and the circular chapel beyond. Behind the chapel are allegorical figures representing the United States and France. An orientation table overlooks the beach and depicts the landings at Normandy.

The Memorial faces the United States at its nearest point to the cemetery; a point between Eastport and Lubec, Maine.

Embedded in the lawn directly opposite the entrance to the old Visitors' Building is a time capsule which has been sealed and contains news reports of the June 6, 1944 Normandy landings. The capsule is covered by a pink granite slab upon which is engraved: To be opened June 6, 2044. Affixed in the center of the slab is a bronze plaque adorned with the five stars of a General of the Army and engraved with the following inscription: 'In memory of General Dwight D. Eisenhower and the forces under his command. This sealed capsule containing news reports of the June 6, 1944 Normandy landings is placed here by the newsmen who were here, June 6, 1969.