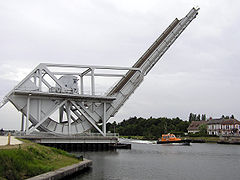 The replacement Pegasus Bridge built in 1994

Pegasus Bridge is a bascule bridge (a type of movable bridge), that was built in 1934, that crossed the Caen Canal, between Caen and Ouistreham, in Normandy, France.

Also known as the Bénouville Bridge after the neighbouring village, it was, with the nearby Ranville Bridge over the river Orne, a major objective of the British airborne troops during Operation Deadstick, part of Operation Tonga in the opening minutes of the Allied invasion of Normandy on 6 June 1944 during the Second World War. A unit of Glider infantry of the British 6th Airborne Division, commanded by Major John Howard, was to land, take the bridges intact and hold them until relieved. The successful taking of the bridges played an important role in limiting the effectiveness of a German counter-attack in the days and weeks following the Normandy invasion.

In 1944 it was renamed Pegasus Bridge in honour of the operation. The name is derived from the shoulder emblem worn by the British airborne forces, which is the flying horse Pegasus.

Pegasus Bridge and the structure that replaced it in 1994 are examples of a distinct sub type of bascule bridge, the "Scherzer rolling lift bascule bridge" or "rolling bridge". Bridges of this type do not pivot about a hinge point, but roll back on curved tread plates attached to the girders of the main span. This design allows a greater clearance of the waterway for a given opening angle.[1]

Battle for the bridge 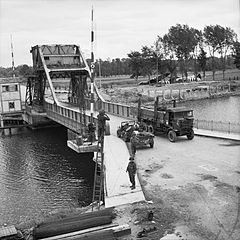 Pegasus Bridge, 9 June 1944; Horsa gliders can be seen where they landed.

On the night of 5 June 1944, a force of 181 men, led by Major John Howard, took off from RAF Tarrant Rushton in Dorset, southern England in six Horsa gliders to capture Pegasus Bridge, and also "Horsa Bridge", a few hundred yards to the east, over the Orne River. The force was composed of D Company (reinforced with two platoons of B Company), 2nd Battalion, Oxford and Bucks Light Infantry; 20 sappers of the Royal Engineers of 249 Field Company (Airborne); and men of the Glider Pilot Regiment. The object of this action was to prevent German armour from crossing the bridges and attacking the eastern flank of the landings at Sword Beach.

Five of the Ox and Bucks's gliders landed as close as 47 yards from their objectives from 16 minutes past midnight. The attackers poured out of their battered gliders, completely surprising the German defenders, and took the bridges within 10 minutes. They lost two men in the process, Lieutenant Den Brotheridge and Lance corporal Fred Greenhalgh.

Greenhalgh drowned in a nearby pond when his glider landed. Lieutenant Brotheridge was killed crossing the bridge in the first minutes of the assault and thus became the first member of the invading Allied armies to die as a result of enemy fire on D-Day.

One glider, assigned to the capture of the river bridge, landed at the bridge over the River Dives, some 7 miles off. Most of the soldiers in this glider moved through German lines towards the village of Ranville where they eventually re-joined the British forces. The Ox and Bucks were reinforced half-an-hour after the landings by Lieutenant Colonel Pine-Coffin's 7th Parachute Battalion, and linked up with the beach landing forces with the arrival of Lord Lovat's Commandos.[2]

One of the members of the 7th Battalion reinforcements was Captain Richard Todd, a young actor, who would, nearly two decades later, play Major Howard in the film The Longest Day.[3] 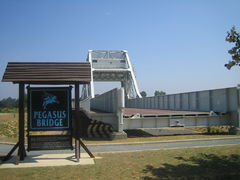 The original Pegasus Bridge now resides in the grounds of the Pegasus Museum. The museum was inaugurated by HRH The Prince of Wales on 4 June 2000, Brigadier James Hill, Françoise Gondrée foundress with General Sir Richard Nelson Gale as Président[4] and lies at the Eastern end of the current bridge. The original bridge was replaced in 1994 by the wider, stronger structure, built by Spie Batignolles.[5] It had been extended by 5 metres in the early 1960s to accommodate the widening of the canal and remained in use until 1993. After its replacement, Pegasus Bridge was left on waste ground.[6] The bridge was sold to the museum for the symbolic price of one Franc.

Many of the soldiers killed in the actions of June 1944 are buried in the war cemetery at Ranville.[7] Lt. Brotheridge's grave, which is located in the churchyard next to the cemetery,[8] has a commemorative plaque that was installed by the Gondrée family.[9] The museum contains a café and a small museum shop that sells Pegasus Bridge related material. Arlette Gondrée, who now runs Café Gondrée, was a small child living in the home when it was liberated. It is not certain that the famous Gondrée café was the first French house to be liberated during D-Day. In the book Commando du Pont Pegase written by the French historian Norbert Hugedé, it is written that it was the house owned by Mr Picot, a few hours before the Gondrée's house.[10]