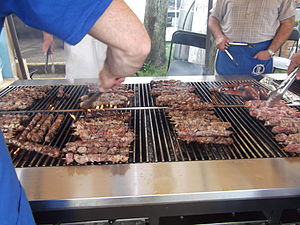 The name Piscataway may be derived from the area's original Native American residents, transplants from near the Piscataqua River defining the coastal border between New Hampshire and Maine, whose name derives from peske (branch) and tegwe (tidal river),[18] or alternatively from pisgeu (meaning "dark night") and awa ("Place of")[19] or from a Lenape language word meaning "Great Deer"[20] or from words meaning "place of dark night".[21] The area was first settled in 1666 by Quakers and Baptists who had left the Puritan colony in New Hampshire.[20]

Piscataway Township was formed on December 18, 1666, and officially incorporated by an act of the New Jersey Legislature on February 21, 1798, as part of the state's initial group of 104 townships.[22] The community, the fifth-oldest municipality in New Jersey,[23] has grown from Native American territory, through a colonial period and is one of the links in the earliest settlement of the Atlantic Ocean seacoast that ultimately led to the formation of the United States. Over the years, portions of Piscataway were taken to form Raritan Township (March 17, 1870, now Edison), Dunellen (October 28, 1887), Middlesex (April 9, 1913) and South Plainfield (March 10, 1926).[22]

Piscataway has advanced educational and research facilities due to the presence of Rutgers University, whose main campus spills into the township. High Point Solutions Stadium, home field for the Rutgers Scarlet Knights football team, is in Piscataway.[24] Part of the Robert Wood Johnson Medical School is located in Piscataway as well.

In 1666, the first appointed Governor of New Jersey, Philip Carteret, granted 12 new settlers from Massachusetts a 100 square mile lot of land that was later founded as the townships of Woodbridge and Piscataway.[28] After this original purchase, additional settlers from the Piscataqua River area of New Hampshire also moved to the area, bringing the name. Coming from a lumbering, shipbuilding and fishing background, these settlers, consisting of mostly Baptists and Quakers, were comfortable with their new surroundings, and looking forward to starting a new life away from political and religious persecution in the north. They were also enterprising and pioneering families who were already experienced in wilderness settlement. Before the original settlers, there were pioneer scouts who surveyed theses new lands and waterways. The town name of Piscataway came from these early pioneers who originally came from the town of Piscataqua. During the original land purchase, the pioneers had signed 12 Articles of Agreement with Governor Carteret, which served as the legal basis for the government of Piscataway and Woodbridge and which shaped the democratic development of self-government. In short, these articles were mainly designed to provide liberty and land ownership for new families and to allow them to establish their own government representatives and religious freedoms.

After a few line and boundary changes, Piscataway and its out plantations were reported to total 40,000 acres, with 66 square miles of land in 1685. The Lenni Lenape Indians were natives to the entire Piscataway area, but were quietly displaced to smaller areas as settler numbers increased. The Indians had established defined trails that the settlers used to travel through the wilderness area and branch out to new lands. Over time, many of these primitive trails became the main routes of travel from town to town and still exist today. The trails along the Raritan River were named after a local Indian tribe called the Raritangs. Piscataway Township is one of the fifth oldest towns in New Jersey and among the fifty oldest towns in the United States.

On February 8, 1777 a running battle took place between approximately 2,000 British and Hessian troops under the command of British General Charles Lord Cornwallis and the local patriot militia led by Colonel Charles Scott and a separate militia commanded by Brigadier General Nataniel Warner.

The township lies on the south side of the Raritan Valley, a line of cities in Central Jersey, along with New Brunswick, Highland Park and South Plainfield. Piscataway is 45 minutes southwest of New York City and 53 minutes northeast of Philadelphia.

Society Hill (with a 2010 Census population of 3,829[30]) is a unincorporated community and census designated place (CDP) located within Piscataway Township.[31][32]

Significant portions of Piscataway make up part of historic Camp Kilmer and the Livingston and Busch Campuses of Rutgers University.

The New Market section historically comprised the Quaker village of Quibbletown. The early name of the village originated from the fact that settlers of different religious denominations quibbled about whether the Sabbath should be observed on Saturday or on Sunday in the village.[34]

As of the 2000 Census, 12.49% of Piscataway's residents identified themselves as being of Indian American ancestry, which was the fourth highest of any municipality in the United States and the third highest in New Jersey—behind Edison (17.75%) and Plainsboro Township (16.97%)—of all places with 1,000 or more residents identifying their ancestry.[49]

Corporate residents of Piscataway include:

High Point Solutions Stadium is a 52,454-seat statdium that opened in September 2011 as the home of the Rutgers Scarlet Knights football team.[57]

Louis Brown Athletic Center is the home of the Rutgers University men's and women's basketball teams. The venue was originally named the Rutgers Athletic Center, and is still referred to as the RAC by many, and can accommodate 9,000 attendees.[58]

Yurcak Field is a multi-purpose soccer and lacrosse stadium, built in 1994, and holds 5,000 people. The stadium is officially named "The Soccer/Lacrosse Stadium at Yurcak Field" in honor of Ronald N. Yurcak, a 1965 All-American Rutgers lacrosse player. Rutgers University and Major League Lacrosse's New Jersey Pride both host their home games at this stadium.[59]

In November 1966, Piscataway voters, under the Faulkner Act, approved a Charter Study and elected a Charter Study Commission to recommend the form of Government best suited to the township's needs. The Commission recommended Mayor-Council Plan F. Voters approved the plan in a referendum in November 1967 and the new form of government was inaugurated on January 1, 1969.[60] Under Plan F the Mayor is the administrator and the Council is the legislative body. A full-time business administrator, appointed by the Mayor with the advice and consent of the Council, and responsible to the Mayor, supervises the day-by-day operation of municipal government. There are seven Council members, one representing each of four wards, and three at-large members. The Mayor and Council members serve four-year terms on a staggered basis, with either the three at-large seats (and the mayoral seat) or the four ward seats up for vote in even years as part of the November general election.[5][61]

Chanelle McCullum was appointed in April 2013 to fill the vacant at-large seat of Kenneth Armwood, who had been the township council president until he was appointed to fill a vacant seat on the Middlesex County Board of Chosen Freeholders.[67] McCullum was elected in November 2013 to serve the balance of the unexpired term through its expiration in December 2016.[68]

Piscataway is located in the 6th Congressional District[69] and is part of New Jersey's 17th state legislative district.[8][70][71]

Piscataway is divided into four fire districts which are served by a total of two volunteer rescue squads and six volunteer fire companies, one of which combines both fire and EMS services. The fire districts are the zones in which fire departments operate, and although the volunteer EMS squads follow the basic regions of the districts, only North Stelton Fire Rescue EMS is a part of a fire district.[99] Additionally, on weekdays and weekends from 6am until 6pm, Robert Wood Johnson University Hospital staffs an ambulance in Piscataway. When the volunteer rescue squads are not in service, either Rutgers University Emergency Services or Robert Wood Johnson University Hospital may be asked to send an ambulance.[100]

The primary law enforcement agency in the township is the Piscataway Police Department.[107] Rutgers University Police Department operates on its campuses within Piscataway. The New Jersey State Police patrols the section of Interstate 287 that bisects the town.

Piscataway is served by a number of roads. County roads include CR 501 (along the border with South Plainfield), CR 514 and CR 529. Route 18 currently ends at Hoes Lane, with plans to extend to Interstate 287. Interstate 287 passes through the center of the township for about 4 miles.

Other limited access roads that are accessible include the New Jersey Turnpike (Interstate 95) in East Brunswick Township (Exit 9) and neighboring Edison Township (Exit 10).

New Jersey Transit provides bus service to and from the Port Authority Bus Terminal in Midtown Manhattan on the 114 route, to Newark on the 65 and 66 routes, local service on the 819 line and additional service on the 980 route. Train service is not available in Piscataway, but service is available on the Raritan Valley Line at the Dunellen station and on the Northeast Corridor at the Edison station.[134]

People who were born in, residents of, or otherwise closely associated with Piscataway include: