Saffron Square (formerly known as "Wellesley Square") is a planned town square and high-rise building in Croydon, United Kingdom being developed by Berkeley Homes. Planning permission for the tower was given in April 2008.[2] The site, on main Croydon thoroughfare Wellesley Road, had lain fallow for over ten years. The project aimed to start in 2008 with completion in 2012; however, construction actually started somewhat later - in 2011. As of early 2014, a large part of the project had been completed. The tower's construction is well underway with its final completion expected in 2015.[1][3] Saffron Square will be the tallest residential tower in Croydon, with 414 private apartments and penthouses. The vision is to deliver a mixed-use development.

In recent years, the development of tall buildings has been encouraged in the London Plan, which will lead to the erection of new skyscrapers over the next few years as London goes through a high-rise boom.[4] It is part of the Croydon Vision 2020 regeneration plan for the London Borough of Croydon to add to its goal of being London's Third City. 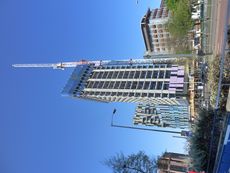 Saffron Tower under construction in 2014

Berkeley Homes' proposals for this key northern gateway site include: