From Infogalactic: the planetary knowledge core
Jump to: navigation, search
For other uses, see Saitama (disambiguation).

Saitama (さいたま市, Saitama-shi?) is the capital and the most populous city of Saitama Prefecture in Japan, situated in the south-east of the prefecture. Its area incorporates the former cities of Urawa, Ōmiya, Yono and Iwatsuki. It is a city designated by government ordinance. Being in the Greater Tokyo Area and lying 15 - 30 kilometres north of central Tokyo, many of its residents commute into Tokyo.

The city was founded on May 1, 2001, and was designated on April 1, 2003 as a government ordinance. For the histories of Urawa, Ōmiya and Yono before the merger, see:

On April 1, 2005, Saitama absorbed the city of Iwatsuki to its east, which became a new ward, Iwatsuki-ku.

The name "Saitama" originally comes from the Sakitama (埼玉郡) district of what is now the city of Gyōda in the northern part of what is now known as Saitama Prefecture. "Sakitama" has an ancient history and is mentioned in the famous 8th century poetry anthology Man'yōshū. The pronunciation has changed from Sakitama to Saitama over the years.

With the merger of Urawa, Ōmiya, and Yono it was decided that a new name, one fitting for this newly created prefectural capital, was needed. The prefectural name "Saitama" (埼玉県) was changed from kanji into hiragana, thus Saitama City (さいたま市) was born. It is the only prefectural capital in Japan whose name is always written in hiragana, and belongs to the list of hiragana cities.

However, Saitama written in hiragana (さいたま市) actually finished in second place in public polling to Saitama written in kanji (埼玉市). Despite this, government officials decided to name the new city Saitama in hiragana, not kanji. In third place in the poll was Ōmiya (大宮市). In fourth was Saitama (彩玉市), written with an alternative kanji for "sai" (彩) which means "colorful". The "sai" (埼) used in the prefectural name is a rare form of a common character (崎) that means cape or promontory.

Situated within the Kantō Plain, the city is topographically comprised by lowlands and plateaus, mostly falling below 20 m above sea level, with no mountain ranges or hills within the city boundaries. The western portion of the city lies on the lowland created by the Arakawa River along with those created by small rivers such as the Moto-Arakawa River, Shiba River, and Ayase River. The rest of the area mostly resides on the Ōmiya Plateau lying in the north-south direction. Dispersed in this region, major rivers flow southward, almost paralleling to one another. 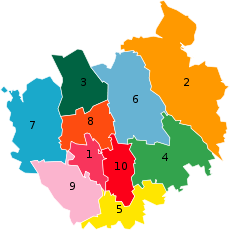 Saitama has ten wards (ku), which were assigned official colours as of April 2005: 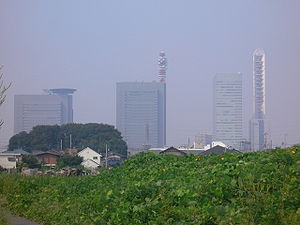 Saitama's economy is principally constituted by commercial business. The city is one of many commercial centers of the Greater Tokyo area and serves Saitama Prefecture, North Kantō, and northeast Honshū.

Saitama is a regional transportation hub for both passengers and freight.

Ōmiya Station, part of the Shinkansen high-speed train network, serves as the biggest railway hub in the prefecture. The Musashino and Saitama Railway lines offer connections at other stations. The Shuto, Tokyo Gaikan and Tōhoku expressways serve the city. National Highway Routes 16, 17, 122, 298 and 463 also serve the city.

The closest major airports are Haneda Airport and Narita International Airport, both about two hours away.[2] Honda Airport in Okegawa is for general aviation and offers no scheduled transport services. Commuter helicopter flights to Narita Airport are offered from Kawajima.[3]

The executive mayor, who is directly elected, is Sōichi Aikawa, an independent backed by the Liberal Democratic Party and Komeito. On May 24, 2009, Aikawa lost his bid for reelection against Hayato Shimizu, who was backed by the opposition DPJ.[4] The city assembly of Saitama has 64 elected members.

The city and Tokorozawa are home to the Japan Professional Basketball League team the Saitama Broncos. 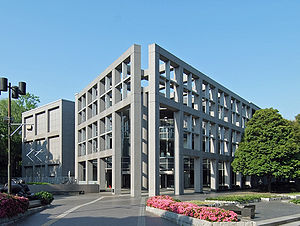