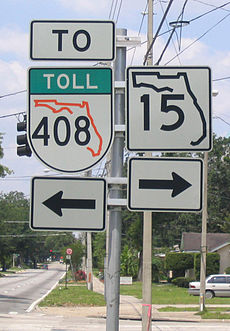 The two kinds of State Road shield that are currently used 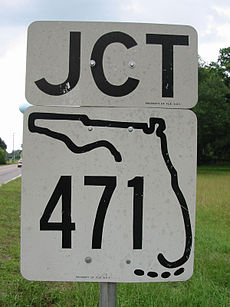 An older State Road 471 shield, with a design used until around 1980. Note that the current design lacks the Florida Keys.

The State Highway System of the U.S. state of Florida comprises the roads maintained by the Florida Department of Transportation (FDOT) or a toll authority. The components are referred to officially as state roads, abbreviated SR.

State Roads are always numbered; in general, the numbers follow a grid. Odd numbered roads run north–south, and even numbered roads run east–west. One- and two-digit numbers run in order from 2 in the north to 94 in the south, and A1A (formerly 1) in the east to 97 in the west (99 used to exist but is now a county road). The major cross-state roads end in 0 and 5.

Other three-digit numbers are placed in horizontal bands based on the first digit:

Three-digit numbers increase from east to west across the band; 30 is skipped because it runs along the Gulf Coast in the panhandle and doesn't go all the way across the state.

When the grid was first laid out in 1945, the rules were almost perfectly followed. However, over the years, as routes have been added, there has not always been room to follow the grid. Placements such as 112 (in the 8 band), 752 (in the 2 band), and 602 (in the 1 band) are the most notable violations of the grid system. The Pensacola area has a collection of these "misplaced" street numbers. When FDOT added route numbers to a collection of Miami-Dade County streets in 1980, most of them received 9## designations regardless of the band that they occupied.

Old State Road 18 shield, modified when the road was given to the county

Prior to the 1945 renumbering, State Roads were given numbers in the order they were added to the system. The 1945 renumbering removed many roads that were never built and added some that had not existed prior to 1945.

In 1977, FDOT changed the division of roads into state/county/local. Most secondary roads and some primary roads were given to the counties, and occasionally a new state road was taken over; some main roads in incorporated areas were given to the localities.

The secondary signs had the S changed to C (for county) and a small COUNTY sticker added to the bottom. As signs grew old, they were replaced with the standard MUTCD county road pentagon. While this occurred throughout the State of Florida, the part of the state south of SR 70 was hit particularly hard by the transition from State to County control and maintenance.

In the early 1980s several state roads were renumbered; in the latter half of the 1990s, budget cuts and other factors prompted a series of truncations of several state roads, primarily in urban areas and the Space Coast and the Treasure Coast. The trend seems to have been reversed since 2002 as new state road designations have been added as a result of construction of new highways, most notably in the Jacksonville, Orlando, and the Tampa-St. Petersburg metropolitan areas.

While most state roads are contiguous, there is a relative handful of routes that have interruptions in their designations.