State of the Presidi

From Infogalactic: the planetary knowledge core
(Redirected from State of Presidi)
Jump to: navigation, search 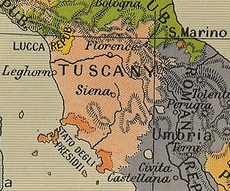 The State of Presidi and the Principality of Piombino in orange. 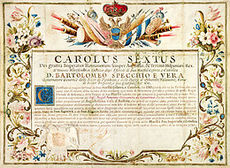 Proclamation issued during the Austrian period (1730) 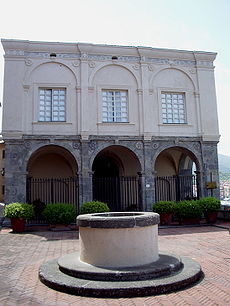 The Palazzo dei Governanti, seat of the Spanish governors in Porto Ercole.

The State of the Presidi (Italian Stato dei Presidi or Stato degli Presidii,[lower-alpha 1] meaning "state of the garrisons"[1]) was a small state (300 km2) in Italy between 1557 and 1801. It consisted of five cities on the Tuscan coast—Porto Ercole and Porto Santo Stefano on the promontory of Monte Argentario, as well as Orbetello, Talamone and Ansedonia—and their hinterland, along with the islet of Giannutri and the fortress of Porto Longone on the island of Elba.[2][3] Always a separate entity attached to the Kingdom of Naples, the Presidi went through three distinct historical periods. They were, from 1557 to 1707, a possession of the Crown of Spain administered by the Spanish Habsburg viceroy of Naples; from 1708 to 1733, a possession of the Austrian Habsburgs administered by their viceroy in Naples; and from 1733 to 1801, a dependency of the Spanish Bourbon kings of Naples. By the Treaty of Florence of 28 March 1801, the king of Naples ceded the Presidi to the French Republic.[2]

The Presidi were originally certain strategic coastal territories of the Republic of Siena that were retained by Spain after the conquest of the Republic. Duke Cosimo I de' Medici of Tuscany overran Siena in 1555 during the last Italian War. Cosimo received military support from the Emperor Charles V, also King of Spain, and his son, Philip II, who was king of Naples as well as England.[4] Since 1548, Cosimo had also been in occupation of the Lordship of Piombino (including Elba). On 29 May 1557, Philip signed a treaty in London with Lord Jacopo VI Appiani of Piombino. The lordship was restored to Giacomo, with Cosimo retaining the fortress of Portoferraio and Philip reserving the right to garrison the cities of Piombino and Scarlino and fortifiy the island of Elba.[5] The conflict over Piombino resolved, on 3 July 1557 Siena and its contado, less the coastal fortresses, were granted in fief[lower-alpha 2] to Cosimo, in return for which the duke cancelled all debts owed by Philip II or Charles.[4] According to the act of infeudation, "not included, but absolutely excluded, and expressly excluded [are] the Sienese fortresses, castles, ports, places and farmland of, namely, Porto Ercole, Orbetello, Talamone, Monte Argentario and Porto Santo Stefano", a territory of about 287 km2.[6][lower-alpha 3] In April 1558, the French, who still held Talamone, made an unsuccessful assault on Orbetello and in September of the same year, the Spaniards took Talamone by force.[4]

Control of the Presidi allowed the Spanish to monitor maritime traffic between Genoa and Naples, since in the 16th century ships kept close to the coast.[7] During the Eighty Years' War, the Presidi served as a stopover on the so-called Cammino di Fiandra ("path of Flanders"). Italian soldiers were massed in Naples and then moved in stages to the Spanish Netherlands, to fight rebels or the French. If they took ship in Naples, they usually stopped to revictual in the Presidi before moving on to Genoa; otherwise they marched overland from Naples to the Presidi and took ship there.[1] In 1587 Cosimo's successor, Francesco, was offering Philip II a million gold pieces for just one of the Presidi, but the king of Spain refused on the grounds that he had no other ports between Catalonia and Naples.[7]

In the 16th century, the Presidi also provided pasture for Tuscan shepherds, who brought their flocks of sheep to the warm coastal grazing lands during the winter. The Tuscan authorities even taxed the head of sheep as their shepherds brought them to the coast, an act which provoked some complaints to the Spanish authorities.[8] In 1603 King Philip III decided to make use of the clause of the treaty of 1557 that allowed Spain to fortify any part of the Island of Elba and on 22 October of the following year he ordered his viceroy, Juan Alonso Pimentel de Herrera, to build a fortress on the island. Construction of Fort San Giacomo at Porto Longone began in March 1605.[6] It had barracks for 2,000 men.[9] The Prince of Piombino, who shared sovereignty over Elba with the Duke of Tuscany, ceded his authority over the thirteen square kilometres of Porto Longone to the Spanish. This was the only case of territorial expansion in the history of the Presidi.[6] 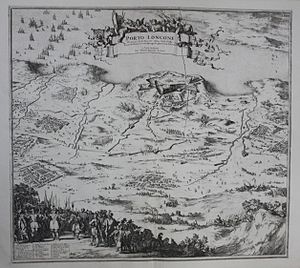 From May to July 1646, Orbetello resisted successfully a siege by troops sent by the French royal minister Mazarin in an attempt to dislodge the Spaniards from Italy. However, French efforts to bring Grand Duke Ferdinand II of Tuscany out of his alliance with Spain failed. He refortified his own coast and raised a militia of 10,000 to observe the Franco-Spanish conflict across the border. In June, the Spanish gained a naval victory over the French off Porto Ercole.[9] In September of the same year, after conquering Piombino, the French managed to capture Porto Longone. The Spanish garrison, which consisted of merely 80 men, held out for two weeks.[9] The Spaniards recaptured both Piombino and Porto Longone during the summer of 1650, at a time when France was in the throes of the Fronde, a domestic uprising. Piombino fell quickly to a Neapolitan force, while Porto Longone, garrisoned by 1,500 Frenchmen, held out ten weeks.[10] Because of subsequent pirate attacks and to defend against any future attacks by the French, the Spanish Crown decided to build another fortress on the bay of Longone: Fort Focardo.[11] 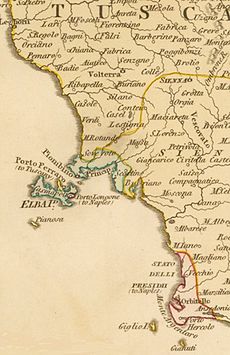 The State of the Presidi, Elba and Piombino in the late 18th century

During the War of the Spanish Succession, the Presidi were claimed by the Emperor Charles VI, who conquered all of them save Porto Longone between 1708 and 1712. In Article 30 of the Treaty of Rastatt of 7 March 1714, France recognised Charles' claim, but no peace with Spain was forthcoming. The chief opponent of that peace was Elisabeth Farnese, queen of Philip V of Spain, who hoped to create an Italian principality for her son. Finally, by the Treaty of Vienna of 30 April 1725, Charles agreed to enfeoff Elisabeth's eldest son, Don Carlos, with the Duchy of Parma and Piacenza when he came of age.[lower-alpha 4] In exchange, the Emperor Charles would retain the Presidi and Spain its rights in Piombino and Elba.[2] This situation was revised in 1733 by the Treaty of Turin (26 September), in which France and Sardinia allied themselves against the Holy Roman Empire and so agreed that Don Carlos should receive the Presidi together with the kingdoms of Naples and Sicily. Spain agreed to the same stipulations and joined the alliance against the emperor in the Treaty of El Escorial on 7 November.[12] During the subsequent War of the Polish Succession, Carlos conquered the Presidi and the south Italian realms. A preliminary peace signed in Vienna in October 1735 confirmed these conquests to him; this was finalised in the definitive Peace of Vienna of 18 November 1738,[2] ratified by Spain at Versailles in 1739.[3] In 1736, Carlos commissioned a work to demonstrate that the kings of Naples had sovereignty over the princes[lower-alpha 5] of Piombino. The result, the 120-page Dritto della Corona di Napoli sopra Piombino,[lower-alpha 6] was published around 1760.[13]

On 21 March 1801, by the Convention of Aranjuez, France and Spain agreed to establish the Kingdom of Etruria out of the old Grand Duchy of Tuscany and to award it the Principality of Piombino, while allowing France to annex the Tuscan part of Elba (Portoferraio). This fulfillment of these terms depended on the agreement of Naples.[14] On 28 March, following the defeat of his armies by the French during the War of the Second Coalition, King Ferdinand IV of Naples agreed, as part of the general settlement of the war, to cede the State of the Presidi, his rights on Elba (Porto Longone) and his claimed sovereignty over the Principality of Piombino to France on the understanding that they would be annexed to Tuscany to form the new Kingdom of Etruria. On 2 May, the French attempted to seize the Tuscan half of Elba, but the Tuscan garrison, with British assistance, resisted until the Treaty of Amiens of 25 March 1802 forced the British to evacuate. The formal cession of the Presidi to Etruria took place on 19 September 1801.[15] Thereafter, its fate follows that of the rest of Tuscany.[2] Piombino and Elba, however, remained under the French.[3]