Spanish Netherlands (Spanish: Países Bajos españoles; Dutch: Spaanse Nederlanden) was the collective name of States of the Holy Roman Empire in the Low Countries, held in personal union by the Spanish Crown (Habsburg Spain) from 1581 to 1714. This region comprised most of modern Belgium and Luxembourg, as well as parts of northern France and Germany. The capital was Brussels.

The Imperial fiefs of the former Burgundian Netherlands had been inherited by the Austrian House of Habsburg from the extinct House of Valois-Burgundy upon the death of Mary of Burgundy in 1482. The Seventeen Provinces formed the core of the Habsburg Netherlands which passed to the Spanish Habsburgs upon the abdication of Emperor Charles V in 1556. When part of the Netherlands separated to form the autonomous Dutch Republic in 1581, the remainder of the area stayed under Spanish rule until the War of the Spanish Succession.

A common administration of the Netherlandish fiefs, centred in the Duchy of Brabant, already existed under the rule of the Burgundian duke Philip the Good with the implementation of a stadtholder and the first convocation of the States General of the Netherlands in 1437. His granddaughter Mary had confirmed a number of privileges to the States by the Great Privilege signed in 1477. After the government takeover by her husband Archduke Maximilian I of Austria, the States inisisted on their privileges, culminating in a Hook rebellion in Holland and Flemish revolts. Maximilian prevailed with the support of Duke Albert III of Saxony and his son Philip the Handsome could assume the rule over the Habsburg Netherlands in 1493.

Philip as well as his son and successor Charles V retained the title of a "Duke of Burgundy" referring to their Burgundian inheritance, notably the Low Countries and the Free County of Burgundy in the Holy Roman Empire. The Habsburgs often used the term Burgundy to refer to their hereditary lands (e.g. in the name of the Imperial Burgundian Circle established in 1512), actually until 1795, when the Austrian Netherlands were lost to the French Republic.

In 1522 Emperor Charles V concluded a partition treaty with his younger brother Archduke Ferdinand I of Habsburg, whereby the House of Habsburg split into an Austrian and a Spanish branch. By the Pragmatic Sanction of 1549, Charles declared the Seventeen Provinces a united and undivisible Habsburg dominion. The division was consummated when he resignedly announced his abdication and left the Spanish branch heritage to his only surviving son Philip II of Spain, while his brother Ferdinand succeeded him as Holy Roman Emperor. The Seventeen Provinces, de jure still fiefs of the Holy Roman Empire, from that time on de facto were ruled by the Spanish branch of the Habsburgs as part of the Brugundian heritage.

Philip's despotism and his stern Counter-Reformation measures sparked the Dutch Revolt in the mainly Calvinist Netherlandish provinces, which led to the outbreak of the Eighty Years' War in 1568. In January 1579 the seven northern provinces formed the Protestant Union of Utrecht, which declared independence from the so-called Spanish branch of the Habsburgs as the Republic of the Seven United Netherlands by the 1581 Act of Abjuration. The Spanish branch of the Habsburgs could only retain the rule over the partly Catholic Southern Netherlands, completed after the Fall of Antwerp in 1585. 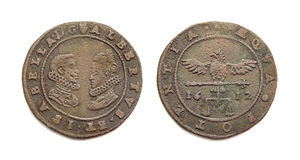 Jeton with portraits of the Archdukes Albert VII, Archduke of Austria and Infanta Isabella of Spain, struck in Antwerp 1612.
Obv: Portraits of Albert and Isabella.
Rev: Eagle holding balance, date 1612.

Better times came, when in 1598 the Spanish Netherlands passed to Philip's daughter Isabella Clara Eugenia and her husband Archduke Albert VII of Austria.The couple's rule brought a period of much-needed peace and stability to the economy, which stimulated the growth of a separate South Netherlandish identity and consolidated the authority of the House of Habsburg reconciling previous anti-Spanish sentiments. In the early 17th century, there was a flourishing court at Brussels. Among the artists who emerged from the court of the "Archdukes", as they were known, was Peter Paul Rubens. Under Isabella and Albert, the Spanish Netherlands actually had formal independence from Spain, but always remained unofficially within the Spanish sphere of influence, and with Albert's death in 1621 they returned to formal Spanish control, although childless Isabella remained on as Governor until her death in 1633.

The failing wars intended to regain the 'heretical' northern Netherlands meant significant loss of (still mainly Catholic) territories in the north, which was consolidated in 1648 in the Peace of Westphalia, and given the peculiar, inferior status of Generality Lands (jointly ruled by the United Republic, not admitted as member provinces): Zeeuws-Vlaanderen (south of the river Scheldt), the present Dutch province of Noord-Brabant and Maastricht (in the present-day Dutch province of Limburg).

As Spanish branch of the Habsburg power waned in the latter decades of the 17th century, the territory of the Netherlands under Habsburg rule was repeatedly invaded by the French and an increasing portion of the territory came under French control in successive wars. By the Treaty of the Pyrenees of 1659 the French annexed Artois and Cambrai, and Dunkirk was ceded to the English. By the Treaty of Aix-la-Chapelle (ending the War of Devolution in 1668) and Nijmegen (ending the Franco-Dutch War in 1678), further territory up to the current Franco-Belgian border was ceded, including Lilloise Flanders (around the city of Lille), as well as half of the county of Hainaut (including Valenciennes). Later, in the War of the Reunions and the Nine Years' War, France annexed other parts of the region.

During the War of the Spanish Succession, in 1706 the Habsburg Netherlands became an Anglo-Dutch condominium for the remainder of the conflict.[2] By the peace treaties of Utrecht and Rastatt in 1713/14 ending the war, the Southern Netherlands fell back to the Austrian Habsburg Monarchy forming the Austrian Netherlands.

From 1581 the Habsburg Netherlands consisted of the following territories, all part of modern Belgium unless otherwise stated: