From Infogalactic: the planetary knowledge core
Jump to: navigation, search
Not to be confused with the modern country of Mauritania.
For the sailing vessel, see RMS Mauretania (disambiguation).

Mauretania (also spelled Mauritania)[1] was in ancient times a part of North Africa corresponding to the Mediterranean coast of what is today Morocco (and the Spanish cities of Ceuta and Melilla).

Mauretania originally was an independent tribal Berber kingdom from about the 3rd century BC. It became a client state of the Roman empire in 33 BC, then a full Roman province after the death of its last king Ptolemy of Mauretania in AD 40.

Mauretania fell to the Vandal conquest in the 430s, but was reconquered by the Eastern Roman Empire in 533. There was a time of weak Byzantine rule when the territory was practically independent. The province was finally lost to the Arab Umayyad Caliphate Muslim conquest of the Maghreb around AD 698. In 743, the Berbers defeated the Umayyad Muslims in the Berber Revolt, regained full independence and founded many Muslim Berber kingdoms.

Mauretania existed as a tribal kingdom of the Mauri people (who gave their name to the wider term Moors) on the Mediterranean coast of North Africa, from at least the 3rd century BC. The Mediterranean coast of Mauretania had commercial harbours for trade with Carthage since before the 4th century BC, but the interior was controlled by Berber tribes, who had established themselves in the region by the beginning of the Iron Age.

The earliest recorded mentions of the Mauri are in the context of Phoenician and Carthaginian settlements such as Lixus, Volubilis, Mogador and Chellah.[2]

King Atlas was a legendary king of Mauretania credited with the invention of the celestial globe. The first known historical king of the Mauri is Baga, who ruled during the Second Punic War. The Mauri were in close contact with Numidia. Bocchus I (fl. 110 BC) was father-in-law to the redoubted Numidian king Jugurtha.

Mauretania became a Roman client kingdom of the Roman Empire in 33 BC. The Romans installed Juba II of Numidia as their client-king. When Juba died in AD 23, his Roman-educated son Ptolemy of Mauretania succeeded him. The mad Emperor Caligula had Ptolemy executed in 40.[3] Emperor Claudius annexed Mauretania directly as a Roman province in 44, under an imperial (not senatorial) governor.

Not depriving the Mauri of their line of kings would have contributed to preserving loyalty and order, it appears: "The Mauri, indeed, manifestly worship kings, and do not conceal their name by any disguise," Cyprian observed in 247, likely quoting a geographer rather than personal observation, in his brief euhemerist exercise in deflating the gods, entitled On the Vanity of Idols.[4]

The known kings of Mauretania are:

In the 1st century AD, Emperor Claudius divided the Roman province of Mauretania into Mauretania Caesariensis and Mauretania Tingitana along the line of the Mulucha (Muluya) River, about 60 km west of modern Oran: 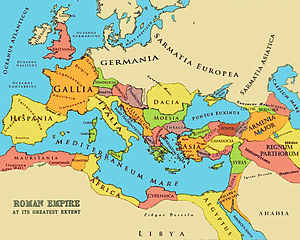 Mauretania gave the empire one emperor, the equestrian Macrinus, who seized power after the assassination of Caracalla in 217 but was himself defeated and executed by Elagabalus the next year.

Emperor Diocletian's Tetrarchy reform (293) further divided the area into three provinces, as the small, easternmost region of Sitifensis was split off from Mauretania Caesariensis.

The Notitia Dignitatum (c. 400) mentions them[clarification needed] still, two being under the authority of the Vicarius of the diocese of Africa: 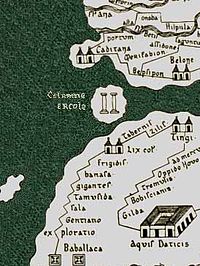 Cities of Roman Mauretania in the Tabula Peutingeriana

And, under the authority of the Vicarius of the diocese of Hispaniae:

and to whom three extraordinary cavalry units were assigned:

During the crisis of the 3rd century, parts of Mauretania were reconquered by Berber tribes. Direct Roman rule became confined to a few coastal cities (such as Septum (Ceuta) in Mauretania Tingitana and Cherchell in Mauretania Caesariensis) by the late 3rd century.[5]

Historical sources about inland areas are sparse, but these were apparently controlled by local Berber rulers who, however, maintained a degree of Roman culture, including the local cities, and usually nominally acknowledged the suzerainty of the Roman Emperors.[6]

In an inscription from Altava in western Algeria, one of these rulers, Masuna, described himself as rex gentium Maurorum et Romanorum (king of the Roman and Moorish peoples). Altava was later the capital of another ruler, Garmul or Garmules, who resisted Byzantine rule in Africa but was finally defeated in 578.[7]

The Byzantine historian Procopius also mentions another independent ruler, Mastigas, who controlled most of Mauretania Caesariensis in the 530s.

The Vandals conquered the Roman province beginning in the 420s. The city of Hippo Regius fell to the Vandals in 431 after a prolonged siege, and Carthage also fell in 439. Theodosius II dispatched an expedition to deal with the Vandals in 441, which failed to progress farther than Sicily.[clarification needed] The Western Empire under Valentinian III secured peace with the Vandals in 442, confirming their control of Proconsular Africa. For the next 90 years, Africa was firmly under the Vandal control. The Vandals were ousted from Africa in the Vandalic War of 533–534, from which time Mauretania at least nominally became a Roman province once again.

The old provinces of the Roman Diocese of Africa were mostly preserved by the Vandals, but large parts, including almost all of Mauretania Tingitana, much of Mauretania Caesariensis and Mauretania Sitifensis and large parts of the interior of Numidia and Byzacena, had been lost to the inroads of Berber tribes, now collectively called the Mauri (later Moors) as a generic term for "the Berber tribes in the province of Mauretania".

In 533, the Roman army under Belisarius defeated the Vandals. In April 534, Justinian published a law concerning the administrative organization of the newly acquired territories. Nevertheless, Justinian restored the old administrative division, but raised the overall governor at Carthage to the supreme administrative rank of praetorian prefect, thereby ending the Diocese of Africa's traditional subordination to the Prefecture of Italy (then still under Ostrogoth rule).

The emperor Maurice sometime between 585 and 590 created the office of exarch, which combined the supreme civil authority of a praetorian prefect and the military authority of a magister militum, and enjoyed considerable autonomy from Constantinople. Two exarchates were established, one in Italy, with seat at Ravenna (hence known as the Exarchate of Ravenna), and one in Africa, based at Carthage and including all imperial possessions in the Western Mediterranean. The first African exarch was the patricius Gennadius.[8]

In 789, the Sharifian Idrisids, considered the founders of the modern Moroccan state,[9][10] unified Mauretania with Berber support, and Morocco did again not come under the rule of an eastern Caliph or any other foreign power until the 20th century.

Ancient episcopal sees of the late Roman province of Mauretania Sitifensis, listed in the Annuario Pontificio as titular sees:[11]