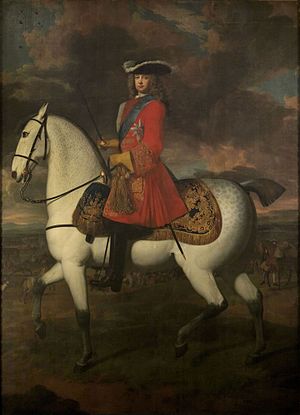 In about 1687, he was a page of honour to Queen Mary of Modena. On 31 December 1688, he was commissioned a cornet in Colchester's Regiment of Horse.[1] Thomas Wentworth saw much service as a soldier in the Low Countries, and was occasionally employed on diplomatic errands. He was appointed an aide-de-camp to King William in August 1692, was commissioned guideon and 1st major in the 1st Troop of Horse Guards 4 October 1693, and cornet and 1st major in the same 20 January 1694. On 7 May 1695, Wentworth was appointed a groom of the bedchamber to the king.[1]

When his cousin William Wentworth, 2nd Earl of Strafford died without issue on 16 October 1695, Wentworth succeeded him as the 3rd Baron Raby. He did not inherit the Strafford fortune or the Jacobean house, Wentworth Woodhouse which passed to the second earl's nephew, Thomas Watson, son of his sister Anne.

Raby was commissioned colonel of the Royal Regiment of Dragoons in 1697 and appointed deputy lieutenant of Lincolnshire on 21 May 1700. He was employed as ambassador extraordinary to Berlin in March 1701, the first of several missions he undertook to Prussia. Under Queen Anne, Raby became a brigadier of horse on 7 January 1703 and a major general on 1 January 1704.[1]

From 1703 to 1704 and 1705 to 1711 he was Queen Anne's ambassador to Berlin. There he secured the services of Johann von Bodt to design Wentworth Castle, at Stainborough in Yorkshire, built, largely directed by letter from a distance, from about 1710 to 1720. While serving abroad, on 1 January 1707, he was commissioned a lieutenant general. From March 1711 to 1714 he was British ambassador at the Hague. On 14 June 1711, he was sworn of the Privy Council, and on 29 June 1711 was created Viscount Wentworth of Wentworth-Woodhouse and of Stainborough and Earl of Strafford. From 1712 until 1714, Strafford was First Lord of the Admiralty, and in October 1712, was made a Knight of the Garter. After the death of Anne, he was one of the Lords Justices who represented George I until the new king arrived in Great Britain.[1]

Strafford was a representative of Great Britain at the Congress of Utrecht, and in 1715 was impeached for his share in concluding this treaty, but the charges against him were not pressed to a conclusion (although he lost his colonelcy). Strafford retired to Wentworth Castle. He was a leading conspirator in the "Atterbury Plot" of 1720–1722 to restore the Stuarts to the throne, and was also a party to the Cornbury Plot of 1731–1735. The Pretender appointed him one of his 'Lords Regent' in England and commander of the Jacobite forces north of the Humber.[2] For his role in furthering the Jacobite cause, he was created "Duke of Strafford" in the Jacobite Peerage of England on 5 June 1722 by the Old Pretender.[3]

On 6 September 1711 he married Anne Johnson, daughter of Sir Henry Johnson, member of parliament for Aldeburgh.[4] Together they had three daughters, Anne, Lucy, and Henrietta; and a son, William (b. 1722). Thomas Wentworth died on 15 November 1739. He was succeeded in his titles by his only son William, who became 2nd Earl of Strafford.