The Worshipful Company of Ironmongers is one of the livery companies of the City of London. 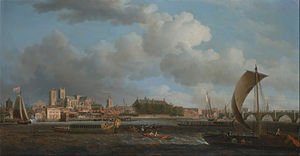 Ceremonial Barge of the Ironmongers' Company

The Ironmongers, who were originally known as the Ferroners, were incorporated under a Royal Charter in 1463. The Company's original association with iron merchants, however, has lessened, especially due to the movement of the industry from Southern England to the North, where iron ore has been more readily available. The Company today is primarily a charitable institution.

The Company ranks tenth in the order of precedence of the City of London's livery companies; it is therefore one of the "Great Twelve City Livery Companies". The Company's motto is God Is Our Strength.

Ironmongers' Hall is the home of the Worshipful Company of Ironmongers. It is located in Aldersgate Street in the City of London. The first hall, dating back to 1457, was in Fenchurch Street; it was rebuilt in 1587 and rebuilt again in 1745 on the same site.[1] The third hall was destroyed on 7 July 1917 by a bomb dropped during World War I.[1] The present Hall stands on land which was bought in 1922: construction work, which was undertaken by Holland, Hannen & Cubitts,[2] started that year and the Hall was opened on 17 June 1925.[1]