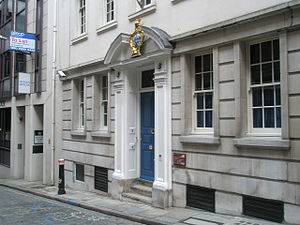 The Worshipfu]l Company of Painter-Stainers is one of the Livery Companies of the City of London. An organisation of painters of metals and wood, is known to have existed as early as 1283. A similar organisation of stainers, who generally worked on staining cloth for decorative wall hangings, existed as early as 1400. The two bodies merged in 1502; the new organisation was incorporated under a Royal Charter in 1581. Now, the Company is less of a trade association of painters, and more of a charitable company with the promotion of education in the fine and decorative arts and crafts as its main theme; The Painters’ Company Scholarship Scheme was established in 2012 to support undergraduates every year at London Art Colleges. Each student receives £5,000 annually from the beginning of their second year until they complete their studies, and they are known as a Painters’ Company Scholar. The students are selected entirely on merit and this is the most meritocratically awarded scholarship for art students in London today.The Painters Company also co-sponsors one of the largest UK open art competitions: The Lynn Painter-Stainers Prize was created in 2005 by the Worshipful Company of Painter-Stainers and the Lynn Foundation to encourage the very best creative representational painting and promote the skill of draftsmanship. With prize money of £30,000 the Prize is one of the most prestigious awards to artists in the UK. www.lynnpainterstainersprize.org.uk .

Eleven Liverymen have served the office of Lord Mayor since 1922.

The Company ranks twenty-eighth in the order of precedence of Livery Companies. The Company's motto is Amor Queat Obedientiam, Latin for Love Can Compel Obedience.

The Master for the year ensuing 19 October 2015 is Anthony John Ward, son of the late Liveryman and scribe to the Company, John Ward. The Clerk is Christopher John Twyman.

The livery company's hall is situated between Huggin Hill and Little Trinity Lane, in the ward of Queenhithe.

Through the centuries the Company has included many distinguished artists including:

Other distinguished members have included: