Arms of the Worshipful Company of Grocers: Argent, a chevron gules between nine cloves proper six in chief and three in base

The Worshipful Company of Grocers is one of the 110 Livery Companies of the City of London and ranks second in order of precedence.

Established in 1345, the Grocers comprise one of London's Great Twelve City Livery Companies.

The company was founded in the fourteenth century as the Guild of Pepperers, which dates from 1180.[1] The Company was responsible for maintaining standards for the purity of spices and for the setting of certain weights and measures. Its members included London's pharmacists, who separated forming the Worshipful Society of Apothecaries in 1617.

The guild was known as the Company of Grossers from 1373 until 1376 when it was renamed the Company of Grocers of London. In 1428, two years after building its first hall in Old Jewry, the Company was granted a Royal Charter by King Henry VI of England.[2] One of the Great Twelve City Livery Companies, it ranks second in the Companies order of precedence after the Mercers' Company. It is said that the Grocers' Company used to be first in the order, until Queen Elizabeth I, as Honorary Master of the Mercers' Company, found herself in procession, after her coronation behind the Grocers' camel which was emitting unfortunate smells; as a result, the Mercers were promoted.

Today, the Grocers' Company exists as a charitable, constitutional and ceremonial institution which plays a significant role in the election of and supporting the Lord Mayor and the Sheriffs of the City of London. The Company's motto is "God Grant Grace".[2] The Company also provides banqueting and conference facilities at Grocers' Hall situated in Prince's Street, next to the Bank of England.[3][4] 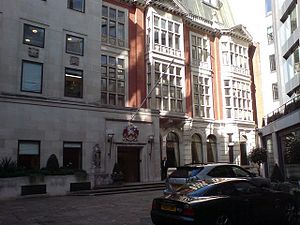 The fifth and current Grocers' Hall, on Prince's Street.

The Grocers' first hall in Old Jewry was destroyed by the Great Fire of 1666 and replaced by a new building within the old walls, paid for largely by its liverymen. This second hall existed until 1802, when the Company's needs for a more spacious and satisfactory base meant a third hall was constructed. However, frequent and extensive repairs were required due to defective foundations in the building, which was replaced by a fourth hall, completed in 1893 on Prince's Street. The hall survived the Blitz with only minor damage to its north wing, but was almost completely destroyed by a fire in 1965, apparently caused by a lightbulb left on in the grand staircase beneath an oak lintel which smouldered and eventually caught fire. A fifth and final hall was constructed nearby in 1970, also on Prince's Street, which remains the Grocers' home today.

The present Master Grocer for 2014-15 is James Roundell[5] and the Company's Clerk is Brigadier Robert Pridham.[6]

Oundle School at Oundle, Northamptonshire, uses the Grocers' crest of a camel as its school badge. The Company is responsible for the maintenance of the school and of The Elms School in Colwall, Herefordshire. Reed's School's Annual Foundation Appeal has been held at Grocers’ Hall for over 50 years.[7]

Additionally the Grocers' Company founded a school in Hackney, east of the City of London in 1876 for the education of "sons of the middle classes". The Grocers' Company School was transferred under London County Council's control after that authority's formation in 1889, and changed its name to Hackney Downs School; it closed in 1995. The school depicted as its school badge a camel, for the Lower School, and a shield with cloves and the motto of the Grocers' Company for the Upper School; the Camel and Cloves are remembered to this day by old boys of the school through the Clove Club (for alumni). The Grocers' Company now maintains close links with and is principal sponsor of Hackney's Mossbourne Academy, renowned for its excellent educational standards.[8]

The Company is also affiliated to HMS Queen Elizabeth, the first of the Royal Navy's new Queen Elizabeth-class aircraft carriers, and with the Coldstream Guards, the British Army's oldest regular regiment.

Eglinton Village in County Londonderry, Northern Ireland was established by the Grocer's Guild, under the name Muff; the local Castle Credit Union[9] adopted usage of the Company's crest, as has Eglington Primary School.[10][11]

The church of St Mary the Virgin at Northill in Bedfordshire shows the Grocers' coat of arms on a stained glass window by John Oliver. The company commissioned the window in 1664.[12]