Yamaguchi Prefecture (山口県, Yamaguchi-ken?) is a prefecture of Japan in the Chūgoku region on Honshū island.[1] The capital is the city of Yamaguchi, in the center of the prefecture.[2] The largest city, however, is Shimonoseki.

Yamaguchi Prefecture was created by the merger of the provinces of Suō and Nagato.[3] During the rise of the samurai class during the Heian and Kamakura Periods (794–1333), the Ouchi family of Suō Province and the Koto family of Nagato Province gained influence as powerful warrior clans. In the Muromachi Period (1336—1573), Ouchi Hiroyo, the 24th ruler of the Ouchi family conquered both areas of Yamaguchi Prefecture. The Ouchi clan imitated the city planning of Kyoto. They gained great wealth through cultural imports from the continent and trade with Korea and Ming Dynasty China. As a result, Yamaguchi came to be known as the "Kyoto of the West," and Ouchi culture flourished. Sue Harutaka defeated the 31st ruler of the Ouchi clan. The Sue clan was then defeated by Mōri Motonari, and the Mōri family gained control of the Chugoku region. Yamaguchi was ruled as part of the Mōri clan domain during the Sengoku period. Mōri Terumoto was then defeated by Tokugawa Ieyasu in the battle of Sekigahara in 1600. He was forced to give up all his land except for the Suō and Nagato areas (current-day Yamaguchi Prefecture), where he built his castle in Hagi. Mōri sought to strengthen the economic base of the region and increase local production with his Three Whites campaign (salt, rice, and paper).

After Commodore Matthew Perry's opening of Japan, clans from Nagato (also called Chōshū) played a key role in the fall of the Tokugawa shogunate and the establishment of the new imperial government. Four years after the Edo Shogunate was overthrown and the Meiji government formed in 1868, the present Yamaguchi Prefecture was established. The Meiji government brought in many new systems and modern policies, and promoted the introduction of modern industry, though the prefecture was still centered around agriculture during this period. In the Taisho period, from 1912 to 1926, shipbuilding, chemical, machinery, and metal working plants were built in Yamaguchi's harbors in the Seto Inland Sea area. During the post-World War II Shōwa Period, Yamaguchi developed into one of the most industrialized prefectures in the country due to the establishment of petrochemical complexes.[4] 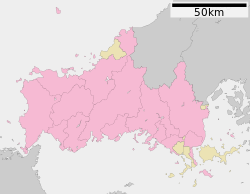 As of April 1, 2012, 7% of the total land area of the prefecture was designated as Natural Parks, namely the Setonaikai National Park; Akiyoshidai, Kita-Nagato Kaigan, and Nishi-Chugoku Sanchi Quasi-National Parks; and Chōmonkyō, Iwakiyama, Rakanzan, and Toyota Prefectural Natural Parks.[5] 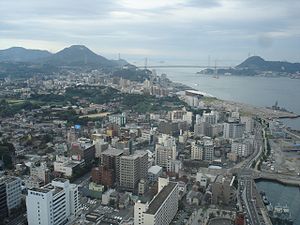 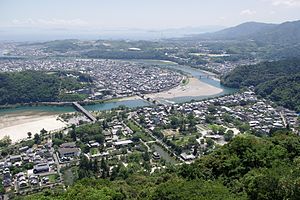 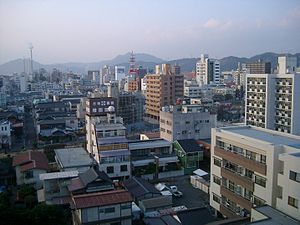 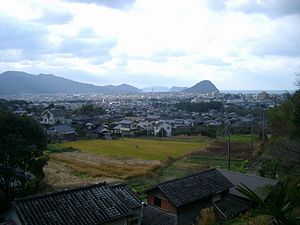 These are the towns in each district:

For the purposes of development analysis, Yamaguchi is construed to be part of Northern Kyūshū. Although Yamaguchi not part of the island of Kyūshū, it has become a functional satellite of the Kanmon Straits metropolitan area.[6]

The most popular place for tourism is Shimonoseki. One of the major attractions is the famous Kintai Bridge in the town of Iwakuni. This five arched wooden structure is considered a symbol of Western Honshū. The area on the banks of the Nishiki river close to the bridge is considered among the best places in Japan for Hanami, when groups of family and friends gather in early April to view cherry blossoms. Akiyoshidai Quasi-National Park, which includes Japan’s longest cave, the Akiyoshido (秋芳洞?), is another popular destination.

Yamaguchi Ube Airport is a domestic airport with service to Haneda Airport (Tokyo).

Yamaguchi Prefecture has alliance with the following three districts.[8]

Since the Meiji Restoration in which lower-rank nobility from Chōshū played a major role, many politicians from Yamaguchi have held important positions in national politics. In the post-war era, the most prominent political family from Yamaguchi is the Kishi-Abe/Satō prime ministerial dynasty, and Yamaguchi is leaning solidly towards the Liberal Democratic Party (LDP).

Delegation to the National Diet

In the House of Councillors, Yamaguchi is represented by two members, making it one of the currently 31 winner-take-all single-member districts. As of 2013, the two members are Yoshimasa Hayashi (LDP, 4th term, up in 2019), agriculture minister in the 2nd Abe Cabinet, and following the April 2013 by-election to replace Nobuo Kishi, Kiyoshi Ejima (LDP, 1st term, up in 2016), former mayor of Shimonoseki city.

The current governor of Yamaguchi is former MIC bureaucrat Tsugumasa Muraoka. He won the gubernatorial election in February 2014 with more than 60% of the vote against other two candidates, and succeeded Shigetarō Yamamoto who had been hospitalized since October 2013 and resigned in January 2014.

Elected governors of Yamaguchi have been:

The prefectural assembly of Yamaguchi has 49 members, elected in unified local elections in 15 electoral districts: 5 single-member districts, four two-member districts and six districts that elect each between four and ten members.[10] In the 2011 election, the LDP won a majority with 27 seats. Liberal Democrats form two parliamentary groups together with independents. As of February 25, 2014, the assembly is composed as follows: LDP 25 members, LDP Shinseikai 8, DPJ 5, Kōmeitō 5, JCP 2, SDP 1, and the independent "groups" shinsei club, tokoton and kusa no ne have one member each.[11]