Yvette Diane Clarke (born November 21, 1964) is a Democratic member of the US House of Representatives from New York. She is ranking member of the Homeland Security Subcommittee on Emerging Threats, Cybersecurity, Science and Technology. Clarke's district was numbered the 11th district from 2007 to 2013, and redistricted as the 9th district in 2013 covering much of central Brooklyn.

Before entering Congress in 2007, Clarke was a member of the New York City Council, representing the 40th council district in Brooklyn, succeeding her mother, Una S. T. Clarke.[1]

The child of Jamaican immigrant parents, Clarke has lived all her life in the Flatbush neighborhood of Brooklyn.[citation needed] Upon graduating from Edward R. Murrow High School, she earned a scholarship to Oberlin College in Ohio, which she attended from 1982 to 1986, and before graduating Oberlin she enrolled at Medgar Evers College,[2] but did not graduate.[3]

Clarke's 2004-2005 campaign listed that she graduated from Oberlin College, the Daily News researched and found out that she did not graduate,[4] rather she went on and enrolled at Medgar Evers College.[3][4][5]

Clarke worked as director of business development for the Bronx Overall Economic Development Corporation and was the second director of the Bronx portion of the New York City Empowerment Zone.[6] At some point, she interned for Congressman Major Owens.[7]

Brooklyn's 40th council district elected Clarke to the New York City Council in 2001. She succeeded her mother, former City Council member Una S. T. Clarke,[1] who held the seat for more than a decade, making theirs the first mother-to-daughter succession in city council.

Clarke is an advocate for the empowerment of women and minorities and introduced legislation that resulted in the Council's Minority & Women-Owned Business Empowerment (MWBE) study that that found women and minority-owned businesses are not awarded their fair share of city contracts. This finding forced New York City to end its system of economic discrimination.[citation needed] As co-chair of the New York Council's Women's Caucus, Clarke secured $9.5 million in funding for organizations that addressed the issues of domestic violence prevention, breast cancer awareness, housing and HIV/AIDS counseling for women.[citation needed]

She cosponsored City Council resolutions that opposed the war in Iraq, criticized the federal USA PATRIOT Act, and called for a national moratorium on the death penalty. She was a frequent critic of the Bush administration's policies, and opposed budget cuts by Bush and the Republican Congress on several programs addressing women's rights and poverty. She later voted against extending provisions of the Patriot Act after the election of President Barack Obama.[8]

Clarke's poicies on Israel are mixed. Her district is around 25% Jewish,[9] and some constituents have criticized some of her stances on Israel.[10][11] In 2010 Clarke signed 2 petitions asking Obama to pressure Israel to resove the Gaza Blockade,[10][11] which she later retracted.[10] This came right after Clarke voted against a resolution that the Goldstone Report to the UN was unfair to Israel.[10] In 2015 Clarke stated that she will vote for the Iran Nuclear Deal, despite requests from her Jewish constituents to vote against the deal which Israeli leaders see as a threat to Israel's existence.[12][13][14][15][9][16]

Clarke is pro-choice and during her tenure in the House of Representatives has consistently voted against legislation that would place restrictions on abortion rights, including voting against passage of the No Taxpayer Funding for Abortion Act of 2011, which sought to prohibit federal funds from being allocated to cover abortions.[17] Her voting record in support of abortion rights has led interest groups such as NARAL Pro-Choice America and Planned Parenthood to give her high ratings (100% each) while her ratings from pro-life organizations like the National Right to Life Committee have been correspondingly low (0%) within the last two years.[18]

She received a 92% rating from the National Journal for being liberal on economic policy in 2011, while she received a low 15% rating from the National Taxpayers Union for her positions on tax and spending in 2011 and a 2% rating from the Citizens Against Government Waste in 2010.[18] She has consistently opposed legislation which seeks to reduce government spending and cut taxes, including voting against the Job Protection and Recession Prevention Act of 2012 which sought to extend tax cuts established during George W. Bush's administration through the end of 2013.[17]

Clarke received 100 percent ratings from Environment America, the League of Conservation Voters, and the Sierra Club, the latter on her clean water positions, in 2011 while she received a low rating of 14% over the period 2008–2011 from the Global Exchange for her loyalty to the finance, insurance, and real estate lobbies.[18] Clarke has opposed legislation which gives priority to economic over conservation interests, such as the Stop the War on Coal Act of 2012 and the Conservation and Economic Growth Act of 2012, while she has supported legislation which increases conservation efforts and government regulation of industry, such as the Offshore Drilling Regulations and Other Energy Law Amendments Act of 2010.[17]

On the Colbert Report, in its "Better Know a District" segment in early September 2012, when Stephen Colbert asked the three-term congresswoman what she'd have changed back in 1898 (the year Brooklyn merged with New York City) if she could go back in time, the congresswoman responded the abolition of slavery. Colbert responded, "Slavery…Really? I didn't realize there was slavery in Brooklyn in 1898," (Slavery was abolished in New York state in 1827.[19]) Clarke responded immediately with, "I'm pretty sure there was" stating that the Dutch owned slaves in New York in 1898.[19][19][20][21] The next day, the congresswoman was unavailable for comment, and her media representative stated that such a statement was meant in humor.[22]

In April 2007, Clarke was the sole member of Congress to oppose a bill authored by a Bronx Democrat that renamed the Ellis Island Library after British-born Bob Hope.[23]

On September 29, 2008, she voted in support of HR 3997, the Emergency Economic Stability Act of 2008. The act failed, 205–228. She also wrote legislation written to improve the process of getting names off the No Fly List. It was passed 413–3 on February 3, 2009.[24] In November 2009 she was one of 54 members of Congress that sent a letter urging President Obama to use diplomatic pressure to resolve the blockade affecting Gaza. She has since retracted her support of the letter.[why?]

Clarke supported the Prison Ship Martyrs' Monument Preservation Act (H.R. 1501; 113th Congress), a bill that would direct the Secretary of the Interior to study the suitability and feasibility of designating the Prison Ship Martyrs' Monument in Fort Greene Park in the New York City borough of Brooklyn as a unit of the National Park System (NPS).[26] Clarke argued that the bill was a good idea because "this monument commemorates not only the sacrifices of soldiers in the Revolutionary War who dedicated themselves to the cause of liberty, but a reminder than even in wartime we must protect basic human rights. These thousands of deaths were an atrocity that should never occur again."[27]

On September 17, 2013, Clarke introduced the Homeland Security Cybersecurity Boots-on-the-Ground Act (H.R. 3107; 113th Congress), a bill that would require the United States Department of Homeland Security (DHS) to undertake several actions designed to improve the readiness and capacity of DHS's cybersecurity workforce.[28][29] DHS would also be required to create a strategy for recruiting and training additional cybersecurity employees.[30]

Congresswomen Clarke has endorsed Hillary Clinton in her capacity as a super delegate for the Democratic Presidential nomination.[31] 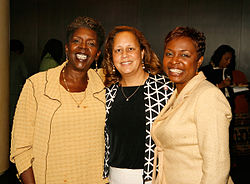 In 2000, her mother ran in the Democratic primary against U.S. Congressman Major Owens, losing to him. In the 2004 election cycle, Yvette Clarke, with only two-and-a-half years' of service as an elected official, campaigned for the same seat, narrowly losing. Owens called these campaigns as well as Yvette's 2006 bid, "long-term double-cross and stab in the back" as Una Clarke and he had been allies,[32] and Yvette had interned for him.[7]

In May 2006, another Caribbean-American candidate, Assemblyman N. Nick Perry, withdrew from the race to succeed Congressman Major Owens, leading some observers to contend that Clarke's chances for winning the race would improve now that another candidate from the same community was no longer competing.

In August 2006, the New York Daily News uncovered the fact that Clarke was misrepresenting her educational background in her campaign literature, stating that she had graduated from Oberlin College.[33] The paper found that she didn't complete her coursework at Oberlin and had subsequently enrolled at Medgar Evers College, but did not graduate.[2][34] The questions of whether she had graduated and from which college were the subject of controversy during her 2006 campaign,[2][33][34][35][36] with her then-PR representative saying she attended Oberlin and finished at Medgar Evers — "case closed".[33][34] In 2011 another PR representative for the congresswoman told Crain's that the congresswoman had re-enrolled at Oberlin in order to complete the credits necessary for the awarding of her degree.[3]

On September 12, 2006, Clarke won the nomination to Congress with just 31.20% of the vote. (In multi-candidate congressional elections in New York, a plurality is sufficient to nominate.) This practically assured her of election in this overwhelmingly Democratic, black-majority district. In the general election on November 7, Clarke was elected to the House of Representatives with 89% of the vote against token Republican opposition.

Clarke was re-elected on November 4, 2008 by a large margin.

Clarke was re-elected on November 2, 2010 by a large margin.