From Infogalactic: the planetary knowledge core
(Redirected from Æthelmod of Leominster)
Jump to: navigation, search
For the Leominster in the USA, see Leominster, Massachusetts.

i/ˈlɛmstər/ LEM-stər) is a market town in Herefordshire, England, and is located at the confluence of the River Lugg and its tributary the River Kenwater, approximately 12 miles (19 km) north of the city of Hereford and approx 7 miles south of the Shropshire border, 11 miles from Ludlow in Shropshire. With a population of approximately 11,700 people,[1] Leominster is the largest of the five towns (Leominster, Ross-on-Wye, Ledbury, Bromyard & Kington) in the county surrounding the City of Hereford.

From 1974 to 1996, Leominster served as the administrative centre for the former local government district of Leominster District.

The town takes its name from a minster, that is a community of clergy in the district of Lene or Leon, probably in turn from an Old Welsh root lei to flow.[2] Contrary to certain reports, the name has nothing to do with Leofric, an 11th-century Earl of Mercia (most famous for being the miserly husband of Lady Godiva). The Welsh name for Leominster, still used today by a few on the Welsh side of the nearby border, is Llanllieni. 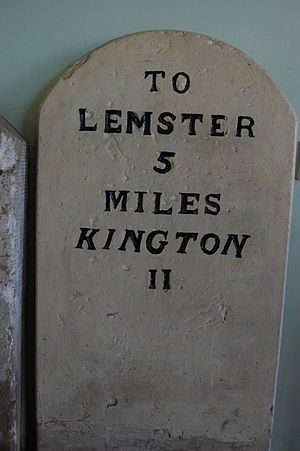 During the Early Middle Ages, Leominster was home to Æthelmod of Leominster, an English saint known to history mainly through the hagiography of the Secgan Manuscript.[3] He is reputedly buried in Leominster.

According to the Anglo-Saxon Chronicle, a raid by Gruffudd ap Llywelyn on Leominster in 1052 resulted in the Battle of Llanllieni, between the Welsh and a combined force of Normans and English Saxons.[4]

Henry II bestowed the minster and its estates on Reading Abbey, which founded a priory at Leominster in 1121, although there was one here from Saxon times.[5] Its Priory Church of St. Peter and St. Paul, which now serves as the parish church, is the remaining part of this 12th-century Benedictine monastery. Quatrefoil piers were inserted between 1872–79 by Sir George Gilbert Scott.[6]

The priory was ransacked by the Welsh forces of Owain Glyndŵr after their victory at the Battle of Bryn Glas near Pilleth in 1402, along with several local manor houses.

Investigations to the north of the priory in 2005 located the position of the cloister, although most of the stone had been stolen following the Dissolution. Discarded animal bones found on the site when submitted to carbon dating showed that the area was occupied in the 7th century. This agrees with the date of 660 CE associated with the founding myth, which suggests a Christian community was established here by a monk, St. Edfrid, from Northumberland.

Leominster is also the historical home of Ryeland sheep, a breed once famed for its "Lemster" [sic] wool, known as 'Lemster ore'. This wool was prized above all other English wool in trade with the continent of Europe in the Middle Ages. It was the income and prosperity from this wool trade that established the town and the minster and attracted the envy of the Welsh and other regions.[citation needed]

From approximately 1748 to 1754, Pinsley Mill in Leominster was home to one of the Paul-Wyatt cotton mills, the first four cotton mills in the world, employing the spinning machines of Lewis Paul and John Wyatt.[7] The mill was financed by Lancashire native Daniel Bourn, and was partly owned by other men from Lancashire. Bourn introduced his own version of the carding engine to work at this mill, and of the four Paul-Wyatt mills, it may have been the most successful, as shortly after the fire that destroyed the mill, it was reported that the cotton works "had been viewed with great pleasure and admiration by travellers and all who had seen them."[8]

As with all towns in the United Kingdom, Leominster has a maritime climate, with mild winters and summers. The data below is from a weather station in Preston Wynne, a village about 10 miles South East of Leominster.

The 4-mile (6.4 km) A49 £9 million bypass opened in November 1988. The town also has a bus station linking it to Hereford and a number of nearby towns and villages.

Leominster railway station has services to Manchester via Ludlow and to Cardiff via Hereford; links to London are achieved by changing at Hereford, for services via Worcester and Oxford, or at Newport, South Wales.

Earl Mortimer college, is a state comprehensive school providing secondary education for about 650 pupils. The town has two primary schools; Leominster Primary School and Westfield's School. Primary schools in the villages around the town include Ivington, Kimbolton, Kingsland, Luston and Stoke Prior

Leominster is twinned with Saverne in France, and Tengeru in Tanzania.