From Infogalactic: the planetary knowledge core
Jump to: navigation, search
For the Australian Christian church leader of the Uniting Church in Australia, see Alistair Macrae.

Alister McRae (born 20 December 1970) is a British rally driver who competed in the World Rally Championship. He is the son of the five-time British Rally Champion Jimmy McRae and the younger brother of the late 1995 World Rally Champion, Colin McRae. Alister is married to Tara and is father to Emmie and Max.

Born in Lanark, McRae took his first foray into motorsport at the age of twelve, when he took up motorcycle trials and motorcross. But it was always rallying where he would demonstrate his true colours. Starting out by competing in Scottish Rally Championship events, success wasn't long in coming. In 1992, he won the prestigious Shell Scholarship and the production category of Great Britain's round of the World Rally Championship.

The following years saw further triumphs, culminating with Alister winning the British Rally Championship outright in 1995, at the wheel of a works Nissan Sunny. More manufacturer drives ensued, with a two-year contract being signed to drive the Formula 2 Volkswagen Golf. He famously competed alongside his brother on a one-off basis in the Subaru World Rally Team on the Rally of Great Britain of 1998. 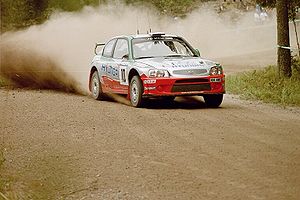 McRae with a Hyundai Accent WRC at the 2001 Rally Finland

His results and reputation led to his services being secured by the newest manufacturer to join the World Rally Championship, Hyundai. In 1999, he competed in the front wheel drive Coupe while simultaneously developing Hyundai's first world rally car, the Accent WRC, alongside veteran Swede Kenneth Eriksson. Then in 2000, he developed the car further during its first year of actual competition, scoring the manufacturer's first ever WRC points. In 2001, the fruits of two years' hard work began to show, with a series of points-scoring finishes (both drivers particularly impressing in the laborious conditions of that year's wet Rally Portugal) and a narrow miss of the podium on his home event, the Rally of Great Britain (which gave the Accent WRC and Hyundai's best finish in the WRC by that time).

Following his performances with Hyundai, McRae was selected to join Mitsubishi, stalwart of the WRC, in 2002. This transpired to be a difficult year, as the Japanese manufacturer found itself in turmoil, with an uncompetitive new car and a massive management re-structure. Things got even worse for the team when McRae was forced to pull out for the rest of the season due to injuries following a mountain bike crash shortly after that year's Rally San Remo therefore further hindering the team's championship effort.[1][2] It subsequently pulled out of rallying at the beginning of the 2003 season, to build a new rally car from scratch, leaving McRae to piece together a sporadic privateer campaign at World Championship level, which was rewarded with a points-scoring showing in a Lancer Evolution in New Zealand.

Undaunted by Mitsubishi's subsequent implicit resolve not to recall either himself or 2002 team-mate François Delecour as the source of one of the few remaining factory opportunities sought to regroup for the 2004 season, Alister entered the 2004 Production World Rally Championship instead. He was on course to take the title on the last event before a mechanical failure struck, handing the title to Niall McShea.

2006 saw Alister successfully competing in the Chinese Rally Championship with the Wanyu Rally Team in a Mitsubishi Evo 9, along with a number of other selected international events. McRae also added to his tally of World championship appearances in the new Toyota Corolla S2000 at the 2006 Wales Rally GB, racking up four Group N stage wins.

He participated in 2009 Dakar Rally.