From Infogalactic: the planetary knowledge core
Jump to: navigation, search
For other uses, see Astarte (disambiguation).

Astarte riding in a chariot with four branches protruding from roof, on the reverse of a Julia Maesa coin from Sidon

Astarte or Ashtoreth (Greek: Ἀστάρτη, Astártē) is the Hellenized form of the Middle Eastern goddess Ishtar, worshipped from the Bronze Age through classical antiquity. The name is particularly associated with her worship in the ancient Levant among the Canaanites and Phoenicians. She was also celebrated in Egypt following the importation of Levantine cults there. The name Astarte is sometimes also applied to her cults in Mesopotamian cultures like Assyria and Babylonia.

Astarte is one of a number of names associated with the chief goddess or female divinity of those peoples.[1] She is recorded in Akkadian as As-dar-tu (𒀭𒊍𒁯𒌓D), the masculine form of Ishtar.[2] The name appears in Ugaritic as ʻAthtart or ʻAṭtart (𐎓𐎘𐎚𐎗𐎚), in Phoenician as Ashtart or Aštart (𐤕𐤓𐤕𐤔𐤀), in Hebrew as Ashtoret (עשתרת).[2] The Hebrews also referred to the Ashtarot or "Astartes" in the plural. The Etruscan Pyrgi Tablets record the name Uni-Astre (𐌖𐌍𐌉 𐌀𐌔𐌕𐌛𐌄).[citation needed]

Astarte was connected with fertility, sexuality, and war. Her symbols were the lion, the horse, the sphinx, the dove, and a star within a circle indicating the planet Venus. Pictorial representations often show her naked. She has been known as the deified evening star.[2]

Astarte was worshipped in Syria and Canaan beginning in the first millennium BC and was first mentioned in texts from Ugarit. She came from the same Semitic origins as the Mesopotamian goddess Ishtar, and an Ugaritic text specifically equates her with Ishtar. Her worship spread to Cyprus, where she may have been merged with an ancient Cypriot goddess. This merged Cypriot goddess may have been adopted into the Greek pantheon in Mycenaean and Dark Age times to form Aphrodite. Stephanie Budin, however, argues that Astarte's character was less erotic and more warlike than Ishtar originally was, perhaps because she was influenced by the Canaanite goddess Anat, and that therefore Ishtar, not Astarte, was the direct forerunner of the Cypriot goddess. Greeks in classical, Hellenistic, and Roman times occasionally equated Aphrodite with Astarte and many other Near Eastern goddesses, in keeping with their frequent practice of syncretizing other deities with their own.[3]

Other major centers of Astarte's worship were the Phoenician city states of Sidon, Tyre, and Byblos. Coins from Sidon portray a chariot in which a globe appears, presumably a stone representing Astarte. "She was often depicted on Sidonian coins as standing on the prow of a galley, leaning forward with right hand outstretched, being thus the original of all figureheads for sailing ships." [4] In Sidon, she shared a temple with Eshmun. Coins from Beirut show Poseidon, Astarte, and Eshmun worshipped together. 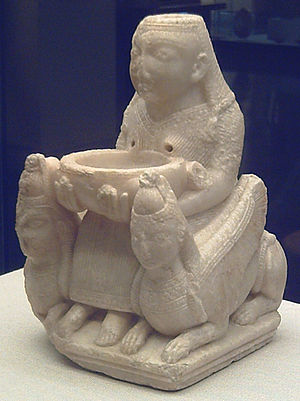 Other faith centers were Cythera, Malta, and Eryx in Sicily from which she became known to the Romans as Venus Erycina. A bilingual inscription on the Pyrgi Tablets dating to about 500 BC found near Caere in Etruria equates Astarte with Etruscan Uni-Astre, that is, Juno. At Carthage Astarte was worshipped alongside the goddess Tanit.

Donald Harden in The Phoenicians discusses a statuette of Astarte from Tutugi (Galera) near Granada in Spain dating to the 7th or 6th century BC in which Astarte sits on a throne flanked by sphinxes holding a bowl beneath her pierced breasts. A hollow in the statue would have been filled with milk through the head and gentle heating would have melted wax plugging the holes in her breasts, producing an apparent miracle when the milk emerged.

The Aramean goddess Atargatis (Semitic form ʻAtarʻatah) may originally have been equated with Astarte, but the first element of the name Atargatis appears to be related to the Ugaritic form of Asherah's name: Athirat.

In the Baʿal Epic of Ugarit, Athirat, the consort of the god El, plays a role. She is clearly distinguished from Ashtart in the Ugaritic documents, although in non-Ugaritic sources from later periods the distinction between the two goddesses can be blurred; either as a result of scribal error or through possible syncretism.

Astarte arrived in Ancient Egypt during the 18th dynasty along with other deities who were worshipped by northwest Semitic people. She was especially worshipped in her aspect as a warrior goddess, often paired with the goddess Anat.

In the Contest Between Horus and Set, these two goddesses appear as daughters of Ra and are given in marriage to the god Set, here identified with the Semitic name Hadad. Astarte also was identified with the lioness warrior goddess Sekhmet, but seemingly more often conflated, at least in part, with Isis to judge from the many images found of Astarte suckling a small child. Indeed, there is a statue of the 6th century BC in the Cairo Museum, which normally would be taken as portraying Isis with her child Horus on her knee and which in every detail of iconography follows normal Egyptian conventions, but the dedicatory inscription reads: "Gersaphon, son of Azor, son of Slrt, man of Lydda, for his Lady, for Astarte." See G. Daressy, (1905) pl. LXI (CGC 39291).

Plutarch, in his On Isis and Osiris, indicates that the King and Queen of Byblos, who, unknowingly, have the body of Osiris in a pillar in their hall, are Melcarthus (i.e. Melqart) and Astarte (though he notes some instead call the Queen Saosis or Nemanūs, which Plutarch interprets as corresponding to the Greek name Athenais).[5]

Figurine of Astarte with a horned headdress, Louvre Museum

In the description of the Phoenician pantheon ascribed to Sanchuniathon, Astarte appears as a daughter of Epigeius (Greek: Uranus) and Ge (Earth), and sister of the god Elus. After Elus overthrows and banishes his father Epigeius, as some kind of trick Epigeius sends Elus his "virgin daughter" Astarte along with her sisters Asherah and the goddess who will later be called Ba`alat Gebal, "the Lady of Byblos".[6] It seems that this trick does not work, as all three become wives of their brother Elus. Astarte bears Elus children who appear under Greek names as seven daughters called the Titanides or Artemides and two sons named Pothos "Longing" and Eros "Desire". Later with Elus' consent, Astarte and Hadad reign over the land together. Astarte puts the head of a bull on her own head to symbolize Her sovereignty. Wandering through the world, Astarte takes up a star that has fallen from the sky (a meteorite) and consecrates it at Tyre.

Ashteroth Karnaim (Astarte was called Ashteroth in the Hebrew Bible) was a city in the land of Bashan east of the Jordan River, mentioned in Genesis 14:5 and Joshua 12:4 (where it is rendered solely as Ashteroth). The name translates literally to 'Ashteroth of the Horns', with 'Ashteroth' being a Canaanite fertitility goddess and 'horns' being symbolic of mountain peaks. Figurines of Astarte have been found at various archaeological sites in Israel, showing the goddess with two horns.[7]

Astarte's most common symbol was the crescent moon (or horns), according to religious studies scholar Jeffrey Burton Russell, in his book The Devil: Perceptions of Evil from Antiquity to Primitive Christianity.[8]

Ashtoreth is mentioned in the Hebrew Bible as a foreign, non-Judahite goddess, the principal goddess of the Sidonians or Phoenicians, representing the productive power of nature. It is generally accepted that the Masoretic "vowel pointing" adopted c. 135 AD, indicating the pronunciation ʻAštōreṯ ("Ashtoreth," "Ashtoret") is a deliberate distortion of "Ashtart", and that this is probably because the two last syllables have been pointed with the vowels belonging to bōšeṯ, ("bosheth," abomination), to indicate that that word should be substituted when reading.[9] The plural form is pointed ʻAštārōṯ ("Ashtaroth"). The biblical Ashtoreth should not be confused with the goddess Asherah, the form of the names being quite distinct, and both appearing quite distinctly in the Book of 1st Kings. (In Biblical Hebrew, as in other older Semitic languages, Asherah begins with an aleph or glottal stop consonant א, while ʻAshtoreth begins with an ʻayin or voiced pharyngeal consonant ע, indicating the lack of any plausible etymological connection between the two names.) The biblical writers may, however, have conflated some attributes and titles of the two, as seems to have occurred throughout the 1st millennium Levant.[10] For instance, the title "Queen of heaven" as mentioned in Jeremiah has been connected with both. (In later Jewish mythology, she became a female demon of lust; for what seems to be the use of the Hebrew plural form ʻAštārōṯ in this sense, see Astaroth).

Some ancient sources assert that in the territory of Sidon the temple of Astarte was sacred to Europa. According to an old Cretan story, Europa was a Phoenician princess whom Zeus, having transformed himself into a white bull, abducted, and carried to Crete.[11]

Some scholars claim that the cult of the Minoan snake goddess who is identified with Ariadne (the "utterly pure")[12] was similar to the cult of Astarte. Her cult as Aphrodite was transmitted to Cythera and then to Greece.[13] Herodotus wrote that the religious community of Aphrodite originated in Phoenicia and came to Greeks from there. He also wrote about the world's largest temple of Aphrodite, in one of the Phoenician cities. Her name is the second name in an energy chant sometimes used in Wicca: "Isis, Astarte, Diana, Hecate, Demeter, Kali, Inanna."[14]