From Infogalactic: the planetary knowledge core
Jump to: navigation, search
This article is about the German state. For the town, see Brandenburg an der Havel. For other uses, see Brandenburg (disambiguation).

It lies in the east of the country and is one of the federal states that was re-created in 1990 upon the reunification of the former West Germany and East Germany. Brandenburg surrounds but does not include the national capital and city-state Berlin.

Originating in the medieval Northern March, the Margraviate of Brandenburg grew to become the core of the Kingdom of Prussia, which would later become the Free State of Prussia. The eastern third of historic Brandenburg (Ostbrandenburg/Neumark) was ceded to Poland in 1945.

In late medieval and early modern times, Brandenburg was one of seven electoral states of the Holy Roman Empire, and, along with Prussia, formed the original core of the German Empire, the first unified German state. Governed by the Hohenzollern dynasty from 1415, it contained the future German capital Berlin. After 1618 the Margraviate of Brandenburg and the Duchy of Prussia were combined to form Brandenburg-Prussia, which was ruled by the same branch of the House of Hohenzollern. In 1701 the state was elevated as the Kingdom of Prussia. Franconian Nuremberg and Ansbach, Swabian Hohenzollern, the eastern European connections of Berlin, and the status of Brandenburg's ruler as prince-elector together were instrumental in the rise of that state.

Brandenburg is situated in territory known in antiquity as Magna Germania, which reached to the Vistula river. By the 7th century, Slavic peoples are believed to have settled in the Brandenburg area. The Slavs expanded from the east, possibly driven from their homelands in present-day Ukraine and perhaps Belarus by the invasions of the Huns and Avars. They relied heavily on river transport. The two principal Slavic groups in the present-day area of Brandenburg were the Hevelli in the west and the Sprevane in the east.

Beginning in the early 10th century, Henry the Fowler and his successors conquered territory up to the Oder River. Slavic settlements such as Brenna[4] (Brandenburg an der Havel), Budusin[5] (Bautzen), and Chośebuz[6] (Cottbus) came under imperial control through the installation of margraves. Their main function was to defend and protect the eastern marches. In 948 Emperor Otto I established margraves to exert imperial control over the pagan Slavs west of the Oder River. Otto founded the Bishoprics of Brandenburg and Havelberg. The Northern March was founded as a northeastern border territory of the Holy Roman Empire. However, a great uprising of Wends drove imperial forces from the territory of present-day Brandenburg in 983. The region returned to the control of Slavic leaders. 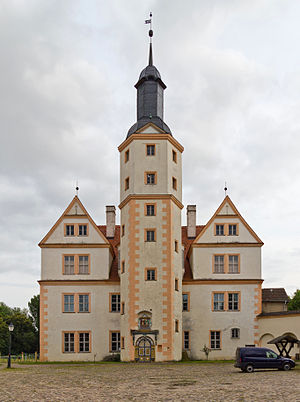 During the 12th century, the Ottonian German kings and emperors re-established control over the mixed Slav-inhabited lands of present-day Brandenburg, although some Slavs like the Sorbs in Lusatia adapted to Germanization while retaining their distinctiveness. The Roman Catholic Church brought bishoprics which, with their walled towns, afforded protection from attacks for the townspeople. With the monks and bishops, the history of the town of Brandenburg an der Havel, which was the first center of the state of Brandenburg, began. In 1134, in the wake of a German crusade against the Wends, the German magnate, Albert the Bear, was granted the Northern March by the Emperor Lothar III. He formally inherited the town of Brandenburg and the lands of the Hevelli from their last Wendish ruler, Pribislav, in 1150. After crushing a force of Sprevane who occupied the town of Brandenburg in the 1150s, Albert proclaimed himself ruler of the new Margraviate of Brandenburg. Albert, and his descendants the Ascanians, then made considerable progress in conquering, colonizing, Christianizing, and cultivating lands as far east as the Oder. Within this region, Slavic and German residents intermarried. During the 13th century, the Ascanians began acquiring territory east of the Oder, later known as the Neumark (see also Altmark). 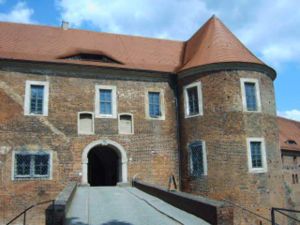 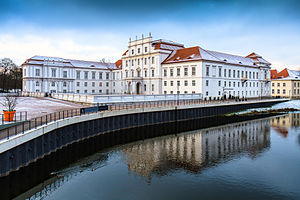 Brandenburg converted to Protestantism in 1539 in the wake of the Protestant Reformation, and generally did quite well in the 16th century, with the expansion of trade along the Elbe, Havel, and Spree Rivers. The Hohenzollerns expanded their territory by acquiring the Duchy of Prussia in 1618, the Duchy of Cleves (1614) in the Rhineland, and territories in Westphalia. The result was a sprawling, disconnected country known as Brandenburg-Prussia that was in poor shape to defend itself during the Thirty Years' War.

Beginning near the end of that devastating conflict, however, Brandenburg enjoyed a string of talented rulers who expanded their territory and power in Europe. The first of these was Frederick William, the so-called "Great Elector", who worked tirelessly to rebuild and consolidate the nation. He moved the royal residence to Potsdam. At the Treaty of Westphalia, his envoy Joachim Friedrich von Blumenthal negotiated the acquisition of several important territories such as Halberstadt. Under the Treaty of Oliva Christoph Caspar von Blumenthal(son of the above) negotiated the incorporation of the Duchy of Prussia into the Hohenzollern inheritance.

Kingdom of Prussia and united Germany

Main articles: Kingdom of Prussia and Province of Brandenburg 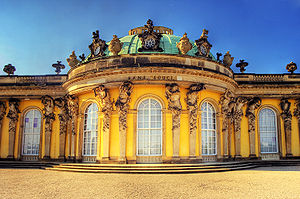 When Frederick William died in 1688, he was followed by his son Frederick, third of that name in Brandenburg. As the lands that had been acquired in Prussia were outside the boundaries of the Holy Roman Empire, Frederick assumed (as Frederick I) the title of "King in Prussia" (1701). Although his self-promotion from margrave to king relied on his title to the Duchy of Prussia, Brandenburg was still the most important portion of the kingdom. However, this combined state is known as the Kingdom of Prussia.

Since the foundation of East Germany in 1949 Brandenburg formed one of its component states. The State of Brandenburg was completely dissolved in 1952 by the Socialist government of East Germany, doing away with all component states. The East German government then divided Brandenburg among several Bezirke or districts. (See Administrative division of the German Democratic Republic). Most of Brandenburg lay within the Bezirke of Cottbus, Frankfurt, or Potsdam, but parts of the former province passed to the Schwerin, Neubrandenburg and Magdeburg districts (town Havelberg). East Germany relied heavily on lignite (the lowest grade of coal) as an energy source, and lignite strip mines marred areas of southeastern Brandenburg. The industrial towns surrounding Berlin were important to the East German economy, while rural Brandenburg remained mainly agricultural.

The present State of Brandenburg was re-established on 3 October 1990 upon German re-unification.[7] The newly elected Landtag of Brandenburg first met on 26 October 1990.[8] As in other former parts of East Germany, the lack of modern infrastructure and exposure to West Germany's competitive market economy brought widespread unemployment and economic difficulty. In the recent years, however, Brandenburg's infrastructure has been modernized and unemployment has slowly declined.

In 1995, the governments of Berlin and Brandenburg proposed to merge the states in order to form a new state with the name of "Berlin-Brandenburg", though some suggested calling the proposed new state "Prussia". The merger was rejected in a plebiscite in 1996 – while West Berliners voted for a merger, East Berliners and Brandenburgers voted against it.

Brandenburg is bordered by Mecklenburg-Vorpommern in the north, Poland in the east, the Freistaat Sachsen in the south, Saxony-Anhalt in the west, and Lower Saxony in the northwest.

The Oder River forms a part of the eastern border, the Elbe River a portion of the western border. The main rivers in the state itself are the Spree and the Havel. In the southeast, there is a wetlands region called the Spreewald; it is the northernmost part of Lusatia, where the Sorbs, a Slavic people, still live. These areas are bilingual, i.e., German and Sorbian are both used.

Brandenburg is known for its well-preserved natural environment and its ambitious natural protection policies which began in the 1990s. 15 large protected areas were designated following Germany's reunification. Each of them is provided with state-financed administration and a park ranger staff, who guide visitors and work to ensure nature conservation. Most protected areas have visitor centers. 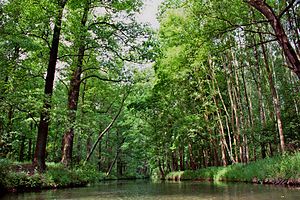 The Spreewald, a biosphere reserve by UNESCO

17.1% of the Brandenburgers adhere to the local Evangelical Church in Germany (mostly the Evangelical Church in Berlin, Brandenburg and Silesian Upper Lusatia), while 3.1% are Roman Catholic (mostly the Archdiocese of Berlin, and a minority in the Diocese of Görlitz).[9] The majority (79.8%)[9] of Brandenburgers can be defined as non-religious, adherents of non-Christian religions or not adherents of the larger Christian denominations. Compared to Berlin and other parts of Germany the proportion of Muslims is very small. 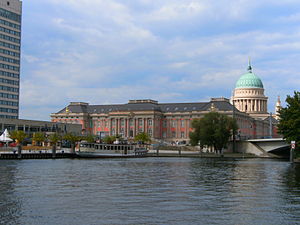 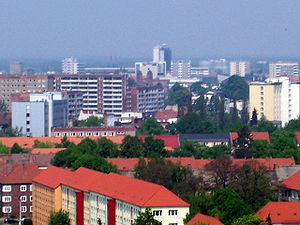 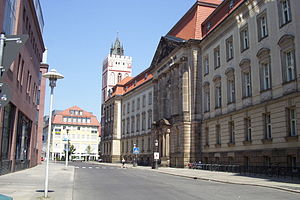 Brandenburg is divided into 14 rural districts (Landkreise) and four urban districts (kreisfreie Städte), shown with their population in 2011:[10] 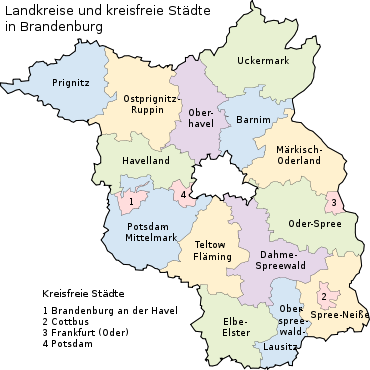 For earlier rulers, see List of rulers of Brandenburg 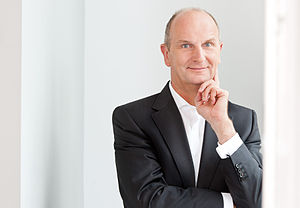 The most recent election took place on 14 September 2014. The coalition government formed by the Social Democrats and the Left Party led by Dietmar Woidke (SPD) was re-elected. The next ordinary state election is scheduled for 2019.

The Brandenburg concerti by Johann Sebastian Bach (original title: Six Concerts à plusieurs instruments)[12] are a collection of six instrumental works presented by Bach to Christian Ludwig, Margrave of Brandenburg-Schwedt,[13] in 1721 (though probably composed earlier). They are widely regarded as among the finest musical compositions of the Baroque era and are among the composer's best known works.