The Siege of Vienna in 1529 was the first attempt by the Ottoman Empire, led by Suleiman the Magnificent, to capture the city of Vienna, Austria. The siege signalled the pinnacle of the Ottoman Empire's power and the maximum extent of Ottoman expansion in central Europe. Thereafter, 150 years of bitter military tension and reciprocal attacks ensued, culminating in the Battle of Vienna of 1683, which marked the start of the 15-year-long Great Turkish War.

The inability of the Ottomans to capture Vienna in 1529 turned the tide against almost a century of conquest throughout eastern and central Europe. The Ottoman Empire had previously annexed Central Hungary and established a vassal state in Transylvania in the wake of the Battle of Mohács. According to Toynbee, "The failure of the first [siege of Vienna] brought to a standstill the tide of Ottoman conquest which had been flooding up the Danube Valley for a century past."[6]

There is speculation by some historians[7] that Suleiman's main objective in 1529 was actually to assert Ottoman control over the whole of Hungary, the western part of which (known as Royal Hungary) was under Habsburg control. The decision to attack Vienna after such a long interval in Suleiman's European campaign is viewed as an opportunistic manoeuvre after his decisive victory in Hungary. Other scholars[7] theorise that the suppression of Hungary simply marked the prologue to a later, premeditated invasion of Europe.[7]

Main article in Battle of Mohács and Campaign of Ferdinand I

In August 1526, Sultan Suleiman I decisively defeated the forces of King Louis II of Hungary at the Battle of Mohács, paving the way for the Ottomans to gain control of south-eastern Hungary; the childless King Louis was killed. His brother-in-law, Archduke Ferdinand I of Austria, brother of Holy Roman Emperor Charles V, claimed the vacant Hungarian throne. Ferdinand won recognition only in western Hungary; while a noble called John Zápolya, from a power-base in Transylvania, challenged him for the crown and was recognised as king by Suleiman in return for accepting vassal status within the Ottoman Empire. Thus Hungary became divided into Royal Hungary and Ottoman Hungary up until 1700.

Following the Diet of Pozsony (modern Bratislava) on 26 October,[8] Ferdinand was declared king of Royal Hungary due to the agreement between his and Louis' families, cemented by Ferdinand's marriage to Louis' sister Anna and Louis' marriage to Ferdinand's sister Mary. Ferdinand set out to enforce his claim on Hungary and captured Buda in 1527, only to relinquish his hold on it in 1529 when an Ottoman counter-attack stripped Ferdinand of all his territorial gains.[9]

In the spring of 1529, Suleiman mustered a great army in Ottoman Bulgaria, with the aim of securing control over all of Hungary and reducing the threat posed at his new borders by Ferdinand I and the Holy Roman Empire. Estimates of Suleiman's army vary widely from 120,000 to more than 300,000 men mentioned by various chroniclers.[10] As well as numerous units of Sipahi, the elite mounted force of the Ottoman cavalry, and thousands of janissaries, the Ottoman army incorporated a contingent from Moldavia and renegade Serbian warriors from the army of John Zápolya.[11] Suleiman acted as the commander-in-chief (as well as personally leading his force), and in April he appointed his Grand Vizier (the highest Ottoman minister), a former Greek slave called Ibrahim Pasha, as Serasker, a commander with powers to give orders in the sultan's name.[12]

Suleiman launched his campaign on 10 May 1529 and faced numerous obstacles from the onset.[13] The spring rains that are characteristic of south-eastern Europe and the Balkans were particularly heavy that year, causing flooding in Bulgaria and rendering parts of the route used by the army barely passable. Many large-calibre cannons and artillery pieces became hopelessly mired or bogged down, leaving Suleiman no choice but to abandon them, while camels brought from the empire's Eastern provinces, unused to the difficult conditions, were lost in large numbers. Sickness and poor health became common among the janissaries, claiming many lives along the perilous journey.

Suleiman arrived in Osijek on 6 August. On the 18th he reached the Mohács plain, to be greeted by a substantial cavalry force led by John Zápolya (which would later accompany Suleiman to Vienna), who paid him homage and helped him recapture several fortresses lost since the Battle of Mohács to the Austrians, including Buda, which fell on 8 September.[14] The only resistance came at Pozsony, where the Turkish fleet was bombarded as it sailed up the Danube.[13] 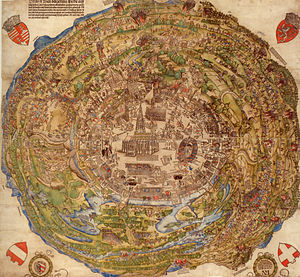 As the Ottomans advanced towards Vienna, the city's population organised an ad-hoc resistance formed from local farmers, peasants and civilians determined to repel the inevitable attack. The defenders were supported by a variety of European mercenaries, namely German Landsknecht pikemen and Spanish musketeers sent by Charles V.[15][16]

The Hofmeister of Austria, Wilhelm von Roggendorf, assumed charge of the defensive garrison, with operational command entrusted to a seventy-year-old German mercenary named Nicholas, Count of Salm, who had distinguished himself at the Battle of Pavia in 1525.[13] Salm arrived in Vienna as head of the mercenary relief force and set about fortifying the three-hundred-year-old walls surrounding St. Stephen's Cathedral, near which he established his headquarters. To ensure the city could withstand a lengthy siege, he blocked the four city gates and reinforced the walls, which in some places were no more than six feet thick, and erected earthen bastions and an inner earthen rampart, levelling buildings where necessary to clear room for defences.[13] 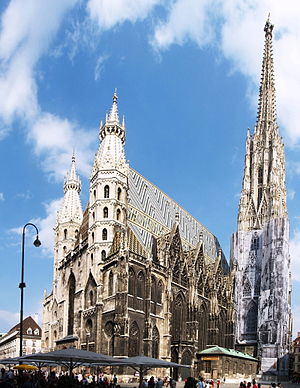 The Ottoman army which arrived in late September had been somewhat depleted during the long advance into Austrian territory, leaving Suleiman short of camels and heavy artillery. Many of his troops arrived at Vienna in a poor state of health after the tribulations of a long march through the thick of the European wet season and of those fit to fight, a third were light cavalry, or Sipahis, ill-suited for siege warfare. Three richly-dressed Austrian prisoners were dispatched as emissaries by the Sultan to negotiate the city's surrender; Salm sent three richly-dressed Muslims back without a response.

As the Ottoman army settled into position, the Austrian garrison launched sorties to disrupt the digging and mining of tunnels below the city's walls by Ottoman sappers, and in one case almost capturing Ibrahim Pasha. The defending forces detected and successfully detonated several mines intended to bring down the city's walls, subsequently dispatching 8,000 men on 6 October to attack the Ottoman mining operations, destroying many of the tunnels, but sustaining serious losses when the confined spaces hindered their retreat into the city.[13]

File:Landsknechte.jpg
Depiction of German Landsknechts circa 1530, renowned mercenary infantry of the Medieval period famous for their long halberds and Zweihänder swords.

More rain fell on 11 October, and with the Ottomans failing to make any breaches in the walls, the prospects for victory began to fade rapidly. In addition, Suleiman was facing critical shortages of supplies such as food and water, while casualties, sickness, and desertions began taking a toll on his army's ranks. The janissaries began voicing their displeasure at the progression of events, demanding a decision on whether to remain or abandon the siege. The Sultan convened an official council on 12 October to deliberate the matter. It was decided to attempt one final, major assault on Vienna, an "all or nothing" gamble.[17] Extra rewards were offered to the troops. However, this assault was also beaten back as, once again, the arquebuses and long pikes of the defenders prevailed.[18]

Unseasonably heavy snowfall made conditions go from bad to worse. The Ottoman retreat turned into a disaster with much of the baggage and artillery abandoned or lost in rough conditions, as were many prisoners. 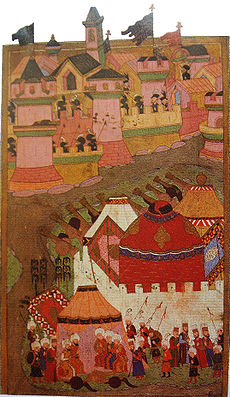 An Ottoman depiction of the siege from the 16th century, housed in the Istanbul Hachette Art Museum.

Some historians[which?] speculate that Suleiman's final assault was not necessarily intended to take the city but to cause as much damage as possible and weaken it for a later attack, a tactic he had employed at Buda in 1526. Suleiman would lead another campaign against Vienna in 1532, but it never truly materialised as his force was stalled by the Croatian Captain Nikola Jurišić during the Siege of Güns (Kőszeg).[5] Nikola Jurišić with only 700–800 Croatian soldiers managed to delay his force until winter closed in.[5][19] Charles V, now largely aware of Vienna's vulnerability and weakened state, assembled 80,000 troops to confront the Ottoman force. Instead of going ahead with a second siege attempt, the Ottoman force turned back, laying waste to the south-eastern Austrian state of Styria in their retreat.[20] The two Viennese campaigns in essence marked the extreme limit of Ottoman logistical capability to field large armies deep in central and western Europe at the time.[21]

The invasion and its climactic siege exacted a heavy toll upon both sides, with tens of thousands of soldiers and civilians left dead in its wake. However, it was a milestone which marked the end of Suleiman's expansion toward the centre of Europe and, arguably, the beginning of the stagnation and decline of the Ottoman Empire as the dominant power of the Renaissance world.[22] The German historian Robert Adolf Kann remarked, "The delivery of Vienna by a brave garrison under Count Niklas Salm in 1529, was probably a greater though less spectacular achievement than the liberation five generations later brought about primarily by the efforts of a rather large army of combined imperial and Polish forces".[23]

Suleiman's retreat, however, did not mark a complete failure. The campaign underlined and maintained Ottoman control of the southern Pannonian Plain and left behind a trail of collateral damage in the neighbouring Habsburg Hungary and Austria that impaired Ferdinand's capacity to mount a sustained counter-attack. Suleiman's achievement was to consolidate the gains of 1526 and further establish the puppet-kingdom of John Zápolya as a buffer-state against the Holy Roman Empire.[24] Ferdinand I erected a funeral monument for the German mercenary Niklas Graf Salm, head of the mercenary relief force dispatched to Vienna, as a token of appreciation to his efforts. Niklas survived the initial siege attempt, but had been injured during the last Ottoman assault and died on 4 May 1530.[25] The Renaissance sarcophagus is now on display in the baptistery of the Votivkirche cathedral in Vienna. Ferdinand's son, Maximilian II, later built the Castle of Neugebaeude on the spot where Suleiman is said to have pitched his tent during the siege.[26]

Once the Ottoman Empire's drive in central Europe was checked, the Ottomans directed their efforts towards the Mediterranean.