From Infogalactic: the planetary knowledge core
Jump to: navigation, search
This article is about the last Crusader state. For other uses, see Tripoli (disambiguation).

The County of Tripoli (1109–1289) was the last of the Crusader states.[1] It was founded in the Levant, that is, the modern-day region of Tripoli, northern Lebanon and parts of western Syria which supported an indigenous population of Christians, Druze and Muslims.[1](p328)[2](p7) When the Crusaders, (Christian, mostly Frankish forces), captured the region in 1109, Bertrand of Toulouse became the first Count of Tripoli. He was a vassal of Baldwin I of Jerusalem. From that time, rule of the county was decided not strictly by inheritance but by factors such as military force (external and civil war), favour and negotiation. In 1289, the County of Tripoli fell to Sultan Qalawun of the Muslim Mamluks of Cairo. The county was absorbed into Mamluk Egypt.[1](p328)

Raymond IV of Toulouse was one of the wealthiest and most powerful of the Prince Crusaders.[3] Even so, after the First Crusade, he had failed to secure any land holdings in the Near East. Meanwhile, the County of Edessa, the Kingdom of Jerusalem and the Principality of Antioch had been established.[4] Tripoli was an important strategic goal as it linked the French in the south with the Normans in the north. It was a fertile and well populated area.[5] In 1102, Raymond IV occupied Tortosa (now Tartus) and in 1103, he prepared, together with veterans of the 1101 crusade, to take Tripoli.[3][6](p197)

On a natural ridge, which he named "Mons Peregrinus" (Mount Pilgrim), 3 kilometres (1.9 mi) from Tripoli, Raymond IV (also known as Raymond de Saint-Gilles) began the construction of a large castle, known locally as "Qal'at Sanjil". In English, it was known as "Saint Giles' castle". Despite this new fortress and seasoned troops, Raymond IV's siege of Tripoli failed to secure the port. He died on 25 February 1105.

Count William of Cerdagne, Raymond IV's cousin and comrade, was supported by Tancred, Prince of Galilee, but his succession in the Tripoli campaign was challenged by Raymond IV's illegitimate son, Bertrand of Toulouse.[7] Bertrand of Toulouse, who was supported by Baldwin I of Jerusalem, arrived in the Near East with a substantial army and a large Genoese fleet.[3] In order to resolve the succession issue, Baldwin I created a partition treaty. It specified that William was to hold northern Tripoli and pay homage to Tancred while Bertrand was to hold south Tripoli as a vassal of Baldwin.[4] Under a united Christian onslaught, Tripoli fell on 12 July 1109, completing the Kingdom of Jerusalem.[3] When William died of an arrow through the heart (some claim it was murder), Bertrand became the first Count of Tripoli.[7](p119)

Structure and devolution of power 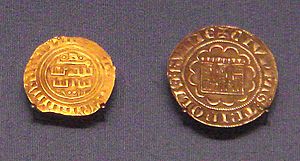 The extent of the County of Tripoli was determined in part by pre-existing Byzantine borders and in part by victory in battle, tempered by the demands of neighbouring crusader states. At its height, the county controlled the coastline from Maraclea in the north to Beirut in the south. Inland, the county's control extended to the Krac des Chevaliers fortress. The rich inland agricultural land of the Homs Gap was known as La Bocquée.[8] The county was divided into 'lordships'; areas based roughly around its coastal ports. The Count of Tripoli himself held the port of Tripoli and its surrounds. He also controlled the hostile region of Montferrand, now modern-day Bar'in, Syria, lying to the east.[3] Approximately one quarter of the land seized around Tripoli was given to the Genoese as payment for military aid. The Genoese admiral Guglielmo Embriaco was awarded the city of Jubail.[3]

Homage to the king

Although occupying a narrow coastal plain, the mountain range beyond was a natural defensive line for Tripoli. Several castle forts were built defend the mountain passes.[8] Muslim forces (Turk and Egyptian) attacked the County of Tripoli along its borders, especially those to the east.[5](p73) In 1137, Raymond II, the reigning count, lost control of Montferrand.[3] The Muslim position strengthened when the Hashshashin (Nazari Ismailis) forces formed in the Nosairi mountains to the north.[3] In 1144, in order to increase the county's defences, particularly against Zangi of Mosul, Raymond II gave the Knights Hospitaller large stretches of frontier land along the Buqai'ah plain.[9] This included the castles of Krak des Chevaliers, Anaz, Tell Kalakh, Qalaat el Felis and Mardabech.[2](p30) In the 1150s, the defences were further strengthened by the presence of the Knights Templar at Tartus on the seashore.[10][11]

In religious matters, the counties of the Kingdom of Jerusalem were expected to follow the lead of the Patriarch of Jerusalem. However, one of the Counts of Tripoli, Pons of Tripoli had formed an alliance with Antioch, and acknowledged its patriarch. This was so even after a Papal edict to the contrary.[3]

War with the Seljuk Empire

As a vassal of the Kings of Jerusalem, Bertrand of Tripoli was drawn into war with the Seljuk Turks. In 1111, Mawdud ibn Altuntash, a Turkish military leader, campaigned against Antioch and Edessa. Bertrand of Tripoli and Baldwin I marched to defend the Christians in the north. In joining Tancred and the Count of Edessa at the Battle of Shaizar, their defence of the kingdom was successful.

In 1119, the Seljuk Empire again attacked Antioch, winning the Battle of Ager Sanguinis. However, Count Pons of Tripoli and Baldwin II defended Antioch and, at the Battle of Hab, successfully defended the flank of the Christian forces.

In 1125, Count Pons of Tripoli marched against the Turks who had again attacked Edessa, this time besieging the town of Azaz. Pons of Tripoli, Baldwin II and the Count of Edessa lured the Turks from Azaz and into an ambush on the plains, where the Turkish forces were defeated.

On 29 June 1170, an earthquake struck the region. The defensive forts of Krac des Chevaliers, Chastel Blanc[9](p236) and al-'Ariymah were damaged. The cathedral of St Mary in Tripoli township was destroyed.[12] The earthquake of 1170 resulted in a brief truce between Nur al-Din and the county (unlike a previous less severe earthquake of 1157 where fighting continued).[13]

Bertrand of Toulouse, son of Alphonso-Jordan 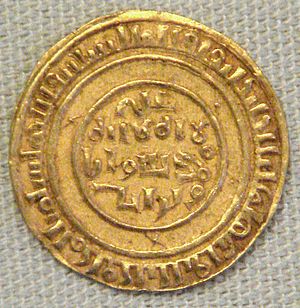 Crusaders coin, County of Tripoli, circa 1230. 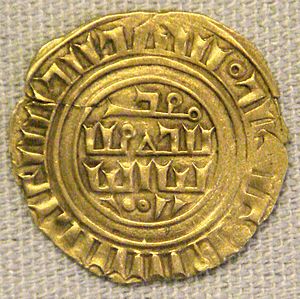 Crusader coin, County of Tripoli, circa 1230.

Alfonso-Jordan (1103 - 1148) was the son of Raymond IV and his third wife, Elvira of Castile.[14] Although he was born in Tripoli, Alphonso-Jordan was raised in France. In 1147, he joined the Second Crusade, which was launched in response to the loss of the County of Edessa to Turkish forces. Alphonso died, possibly poisoned, in Caesarea, in 1148.[12] He had an illegitimate son, Bertrand of Toulouse, who continued his progress towards Tripoli. Count Raymond II (1115 - 1152), the grandson of Bertrand, Count of Tripoli, engaged his enemies, Nur al-Din and Unur of Damascus to confront his cousin, Bertrand. The Turkish forces, having only recently battled Raymond II at the Siege of Damascus, attacked the castle of Arima (al-Ariymah).[9](p224) They captured Bertrand of Toulouse, who spent the following decade in Muslim prisons. He was released in 1159 following the intervention of Manuel Comnenus, emperor of Byzantium.[12](p197) Raymond II later regained 'Araima. In 1152, Raymond II was killed by the Hashashin. He was the first recorded non-Muslim victim of this sect.[3] The death of Raymond II led to indiscriminate killing of people of the Near East indigenous to Tripoli and ongoing tension between the Christians and Muslims of the county.

Bohemond VII of Tripoli (1261 – 19 October 1287) was Count of Tripoli and the nominal Prince of Antioch from 1275 until his death. From 1275 to 1277, Bartholomew, Bishop of Tortosa was Bohemond VII's regent.[12] Paul, Bishop of Tripoli, who was a friend of the Templar Grandmaster, William of Beaujeu, opposed the succession of Bohemond VII.[12] Ernoul wrote:

"This was the beginning of war between the Bohemond VII and the Templars."[15]

After the death of Guy II Embriaco in 1282 and Bohemond VII in 1287, a power vacuum existed in Tripoli. The lords of the County of Tripoli organised and brought forth Benedetto I Zaccaria (1235 - 1307), a powerful Genoese merchant. They encouraged the Genoese to take control of the county. In Tripoli, a special social status had been granted to people from the great mercantile cities of Europe, especially those from the maritime republics of Italy, (Venice for example). They were not, however, ranked among the aristocracy.[6](p172) The communes elected Bartholomew Embriaco to the role of Mayor of Tripoli. He also promoted trade with the Genoese. Bohemond VII had no issue. His mother, Sybille of Armenia was discounted in the succession because she was the friend of the Bishop Bartholomew of Tortosa, considered an enemy of Tripoli. Bohemond VII's younger sister, Lucie, established herself at Fort Nephin with the support of the Knights Hospitaller. Eventually, Bartholomew Embriaco and the communes decided they could not rule. Benedetto I Zaccario declined to rule. Thus, after negotiations, Lucie became Lucia, Countess of Tripoli in 1288.[17]

Fall to the Muslims

Constant infighting, lack of resources, a series of poor harvests, changes to trade routes and the local economy and Muslim and Mongol military pressure led to the decline of the Kingdom of Jerusalem.[2](p7) By the 1280s, only two crusader states remained; the remnants of Jerusalem and the County of Tripoli. Even though, the Mamluk government of Egypt had a treaty with the county, in March, 1289, Sultan Qalawun of Egypt attacked Tripoli. Despite desperate defense operations, the county fell and was merged with Qalawun's empire.[3]

Tripoli is lost to Egyptian forces:

Tripoli passes to the Kings of Cyprus and Jerusalem:

Main article: Officers of the County of Tripoli