Craven in the Domesday Book

The extent of the medieval district of Craven, in the north of England is a matter of debate. The name Craven is either pre-Celtic Britain, Britonnic or Romano-British in origin. However, its usage continued following the ascendancy of the Anglo-Saxons and the Normans – as was demonstrated by its many appearances in the Domesday Book of 1086. Places described as being In Craven in the Domesday Book fell later within the modern county of North Yorkshire, as well as neighbouring areas of West Yorkshire, Lancashire and Cumbria. Usage of Craven in the Domesday Book is, therefore, circumstantial evidence of an extinct, British or Anglo-Saxon kingdom or subnational entity (such as a shire or earldom).

The modern local government district of Craven – a much smaller area entirely within North Yorkshire – was defined in 1974. 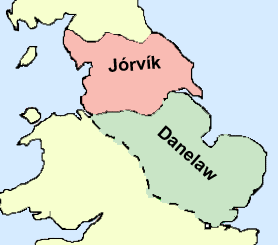 Although historic Craven extended a little further southeast in Yorkshire, as it still does with the Church of England's Deanery of South Craven, the northwestern boundary is the one much disputed. Before the Norman Conquest the North of England from coast to coast was administered from York and named The Kingdom of York. By 1086 the Normans had designated only one county in the North of England and that was Yorkshire. One may assume thereby that the Norman Yorkshire of 1086 was much the same as the Kingdom of York of 1065; and the Domesday Book supports this.

It has also been proposed that the first Yorkshire was smaller, much as it was up till 1974, and that Amounderness, Cartmel, Furness, Kendale, Copeland and Lonsdale were attached to it in the Domesday Book, merely for administrative convenience.[2][3][4][5]

Craven in the Domesday Book

File:Curactes-in-Craven-Yorkshire-in-1086.png
In the Domesday Book of 1086, which lists the lands ascribed to various lords, some pages have a sub-heading of In Craven, suggesting that many places in north-central Engand had previously belonged to an extinct geopolitical entity.

The Domesday Book (1086) was essentially an economic census of England, completed during the reign of William the Conqueror, to find out how much each landholder had in arable land and what that land was worth in terms of the taxes they used to pay under Edward the Confessor.

The areas of ploughland were counted in carucates: the land a farmer could manage throughout the year with a team of eight oxen. That area varied with the local soil but on average it was 120 acres, (50 hectares). Some carucates are designated Waste, many of these were devastated and depopulated by the Norman army during the Harrying of the North 1069–70, ca.17 years prior to this survey.

The Land of the King in Craven, Domesday Book folio 301v[6]

Mostly in Airedale but also in Lonsdale for that was then considered part of Yorkshire.

The Land of The Clamores of Yorkshire in Craven, Domesday Book folio 380

These lands centered on Bolton Abbey were soon after this date transferred to Robert de Romille. And since the Saxon manse at Bolton Abbey was beyond repair Romille built a castle elsewhere: Skipton Castle.[8]

William de Percy was the founder of the powerful English House of Percy.

The Land of Gilbert Tison in Craven, Domesday Book folio 327

By 1118 Tison had suffered a demotion and his lands returned to the king then given to the Houses of Romille, Percy, Fitz John and d'Aubigny[1]

An "in crave" entry in this folio is difficult to explain. It is followed by Holecher, Bretebi which Robert H Skaife identified with Holker Hall and neighbouring Birkby Hall east of Grange-over-Sands (now in Cumbria), ignoring the Craven title. William Farrer had connected them with Craven as parts of Kettlewell, although no longer traceable.[9] All the rest of fitzBaldric's land were in East Yorkshire, and he was High Sheriff of Yorkshire 1069–1086.

In 1066 a nephew of Ralph Tesson, Ernies de Buron, from Beuron near Mantes, Normandy[10] provided William the Conqueror with money, men and the ships for the invasion of England. Ernies fought at the Battle of Hastings and is named in the Falaise Roll and in the Rolls of Battle Abbey.[11] He settled in England 1068. The Doomsday Book lists that he had seventy-two properties in Lincolnshire and Yorkshire.[12] In 1086 he succeeded Hugh fitz Baldric as High Sheriff of Yorkshire.[13] However between 1102 and 1118 his lands were confiscated by King Henry I and given to the House of Romille.[1]

The Land of Osbern D'Arques in Craven, Domesday Book folio 328

The Land of the King's Thegns in Craven, Domesday Book folio 331v

The term thegn means a retainer of a king or nobleman below the rank of high-reeve.

In looking for a definition of Craven, Roger de Poitou's entries on folio 332 are ambiguous for that page lacks the heading "In Craven". However some manors listed here as his are described elsewhere in the book as being in Craven. Thornton-in-Craven is quite outspoken in this matter! The omission of a heading could be considered a scribal error. Or, since the previous sub-section was entitled 'In Craven', the scribe may have decided it unnecessary to repeating the heading.

However Poitou's total lands cannot be used to determine the extent of Craven for he also held lands between the Ribble and the Mersey together with Amounderness.

After 1102 Roger rebelled against the King, so Henry I of England confiscated his lands and gave those in upper Wharfedale and upper Airedale to the House of Romille and those in Ribblesdale and around Gisburn to the House of Percy.[1] Sometime after Domesday Poitou had given Bowland to Robert de Lacy, the Baron of Pontefract. The king allowed him to keep Bowland and expanded his lands with the whole of Blackburnshire and part of Amounderness.[14] These lands formed the basis of the Honour of Clitheroe.