The Ethiopian calendar (Amharic: የኢትዮጵያ ዘመን አቆጣጠር?; yä'Ityoṗṗya zämän aḳoṭaṭär) is the principal calendar used in Ethiopia and also serves as the liturgical calendar for Christians in Eritrea and Ethiopia belonging to the Orthodox Tewahedo churches, Eastern Catholic Church and Coptic Orthodox Church. It is a solar calendar (the older Alexandrian or Coptic calendar brought to Ethiopia by missionaries) which in turn derives from the Egyptian calendar, but like the Julian calendar, it adds a leap day every four years without exception, and begins the year on August 29 or August 30 in the Julian calendar. A seven- to eight-year gap between the Ethiopian and Gregorian calendars results from an alternate calculation in determining the date of the Annunciation of Jesus.

Like the Coptic calendar, the Ethiopic calendar has twelve months of 30 days plus five or six epagomenal days, which comprise a thirteenth month. The Ethiopian months begin on the same days as those of the Coptic calendar, but their names are in Ge'ez. The sixth epagomenal day is added every four years without exception on August 29 of the Julian calendar, six months before the Julian leap day. Thus the first day of the Ethiopian year, 1 Mäskäräm, for years between 1900 and 2099 (inclusive), is usually September 11 (Gregorian). It, however, falls on September 12 in years before the Gregorian leap year.

In the Gregorian year 2015 Anno Domini, the Ethiopian calendar year 2008 begins on September 12, rather than September 11, on account of this additional epagomenal day occurring September 11 every four years. 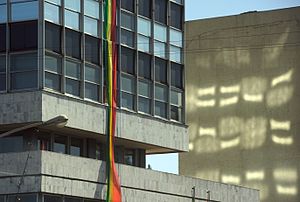 A building in downtown Addis Ababa, Ethiopia, sports bunting in the Ethiopian national colors of green, yellow and red to mark the Ethiopian Millennium on September 11, 2007.

To indicate the year, Ethiopians and followers of the Eritrean churches today use the Incarnation Era, which dates from the Annunciation or Incarnation of Jesus on March 25, AD 9 (Julian), as calculated by Annianus of Alexandria c. 400; thus its first civil year began seven months earlier on August 29, AD 8. Meanwhile, Europeans eventually adopted the calculations made by Dionysius Exiguus in AD 525 instead, which placed the Annunciation eight years earlier than had Annianus. This causes the Ethiopian year number to be eight years less than the Gregorian year number from January 1 until September 10 or 11, then seven years less for the remainder of the Gregorian year.

In the past, a number of other eras for numbering years were also widely used in Ethiopia and the Axumite Kingdom.

The most important era—once widely used by the Eastern Churches, and still used by the Coptic Church—was the Era of Martyrs, also known as the Diocletian Era, or the era of Diocletian and the Martyrs, whose first year began on August 29, 284.

Anno Mundi according to Panodoros

Around AD 400, an Alexandrine monk called Panodoros fixed the Alexandrian Era (Anno Mundi = in the year of the world), the date of creation, on 29 August 5493 BC. After the 6th century AD, the era was used by Egyptian and Ethiopian chronologists. The twelfth 532-year-cycle of this era began on 29 August AD 360, and so 4x19 years after the Era of Martyrs.

Anno Mundi according to Anianos

Bishop Anianos preferred the Annunciation style as New Year's Day, 25 March (see above). Thus he shifted the Panodoros era by about six months, to begin on 25 March 5492 BC.

The four-year leap-year cycle is associated with the four Evangelists: the first year after an Ethiopian leap year is named in honour of John, followed by the Matthew-year and then the Mark-year. The year with the sixth epagomenal day is traditionally designated as the Luke-year.

There are no exceptions to the four-year leap-year cycle, like the Julian calendar but unlike the Gregorian calendar.