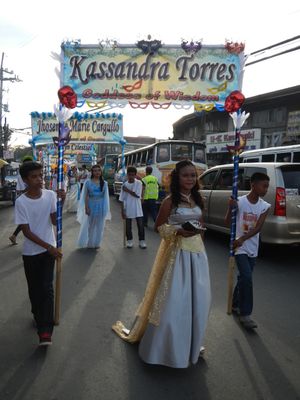 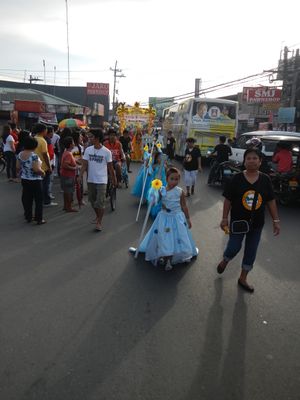 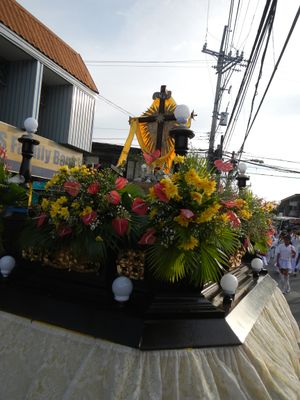 A replica of the True Cross in solemn procession during the Flores de Mayo in Noveleta, Cavite 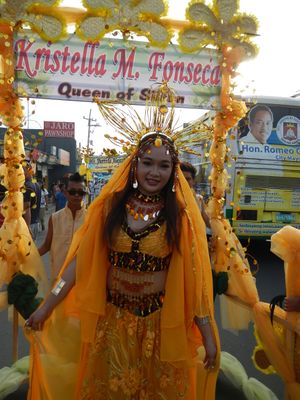 Flores de Mayo (Spanish for "flowers of May") is a festival held in the Philippines in the month of May. It is one of the May devotions to the Blessed Virgin Mary and lasts for the entire month.

The Santacruzan (Spanish for "sacred cross") is the ritual pageant held on the last day of Flores de Mayo. It honors the finding the True Cross by Helena of Constantinople (known as Reyna Elena) and Constantine the Great. Its observance in May is likely connected to the May 3 observance of Roodmas, which was abolished when Pope John XXIII combined it with the Feast of the Triumph of the Cross on 14 September.[citation needed]

The name of the festival is derived from the Spanish language word flores meaning "flowers." Other names are "Flores de María" ("Flowers of Mary") and "Álay" (Filipino for "offering").

In the Bicol Region, especially in Barangay Sabang, Naga, the Flores de Mayo is held every Wednesday and Saturday of May. It is headed by the Legion of Mary, Praesidium Cause of our Joy, and jointly sponsored by the Rañeses and Alcantara families. The ritual begins with the recitation of the rosary, and the last day is simply called the "katapusan".

The traditional "María" with its respective meaning is said after the recitation of the Salve Regina in Spanish and the Litany of Loreto. After the ceremony, simple snacks are given to the children who attended the devotion. Alabasyón (from the Spanish for "praising") is the term for prayers sung in honour of the Holy Cross.

The towns particularly in Iloilo has their respective puroks or streets and the barangays which has their respective chapel or house of prayer or even in the church where an image of the Virgin Mary is venerated and children gathers to have a simple catechism and teachings about the life and story of Mary, history of Marian apparitions, Christian doctrines and values, holistic values and virtues and other life's teachings. They were also taught some prayers and some songs uniquely recited only during the Flores de Mayo and the children offer some flowers before the image of the Virgin Mary as a symbol of love, affection and veneration. This is a commemoration and reminiscent of the Our Lady of Fatima apparition to the three children which first took place on the 13th of May in 1917. After awhile, they were offered some snacks. Some churches and areas are giving children some paper tickets for actively participating and doing well during the catechism in which at the end of the month of May which also coincides with the end of the Flores de Mayo, the children redeem the value of the tickets which are school supplies ready for the school opening in June. Santacruzan is usually held during the last few days of May to coincide with the end of the catechism for children.

Amongst the Tagalog people, the custom began after the proclamation of the dogma of the Immaculate Conception in 1854 and after the circa 1867 publication of Mariano Sevilla's translation of the devotional "Flores de María" ("Flowers of Mary"), also known by its longer title "Mariquít na Bulaclac nasa Pagninilaynilay sa Buong Buannang Mayo ay Inihahandog nañg mañga Devoto cay María Santísima" ("Beautiful Flowers that in the Meditations in the Whole Month of May are Offered by Devotees to Mary Most Holy").

One famous May tradition in Batangas (particularly in Lipa) is the Luglugan, or nightly devotion and party honoring the Virgin Mary. Held in structures called tuklóng, devotees offer flowers and prayers to an image of Mary every night. After the prayer, the Hermanos or Hermanas for the day will give away treats to the participants, followed by the party. The Luglugan lasts for a month until the Tapusan ("ending") which is marked with a Mass, a Santacruzan and procession of the Blessed Virgin Mary, and capped with a final Luglugan that lasts until the following morning.

A Santacruzan is a religio-historical beauty pageant held in many cities, towns, and even in small communities throughout the Philippines during the month of May. One of the most colorful aspects of this festival, the pageant depicts the finding of the True Cross by Queen Helena, mother of Constantine the Great. Many movie and television personalities participate in the events and are featured in major santacruzan. This festival became part of Filipino traditions identified with youth, love, and romance.

Prior to the Santacruzan, a novena is held in honor of the Holy Cross. The procession itself commemorates the search of the Holy Cross by Reyna Elena and her son, Emperor Constantine. After the Holy Cross was found in Jerusalem and translated to Constantinople (now İstanbul, Turkey), there was a joyful celebration for thanksgiving.

Order of the procession

The participants of this pageant would follow this typical arrangement:

Each figure in this group alludes to a title of the Virgin Mary (usually found in the Litany of Loreto) or to a figure associated with her. Each letter of the angelic salutation "AVE MARÍA" is borne by an "angel", or a girl wearing a long white dress and wings.

The procession is accompanied by the steady beat of a local brass band, playing and singing the Dios te salve (the Spanish version of the Hail Mary). Devotees hold lighted candles and sing the prayer as they walk. It is customary for males participating in the Santacruzan to wear the traditional Barong Tagalog and that the females wear any Filipiniana-inspired dress.

After the procession in some places, there is the pabítin game (in Cavite, it is called "agaw-bitin") that serves as a culminating activity for the children. The pabítin is a square-shaped bamboo grille or frame to which goodies (candies, fruits, small trinkets, etc.) are tied with thin strings. This grille in turn is tied to a long rope passed over a strong branch or pole some 2 metres above the ground. Children then gather under the frame as the it is slowly lowered, and they then jump as high as they could to grab the goodies while someone jerks it up and down repeatedly until all the prizes are gone. Sometimes the palosebo (the local version of the greasy pole) is also played, where a tall bamboo pole is smeared with grease which participants must climb to get a small red banner or a bag with a prize, such as ₱500 or a higher amount.