Flying Tiger Line, also known as Flying Tigers, was the first scheduled cargo airline in the United States and a major military charter operator during the Cold War era for both cargo and personnel (the latter with leased aircraft). The airline was bought by Federal Express in 1988.

The company was started by Robert William Prescott.[1] It was headquartered on the grounds of Los Angeles International Airport in Westchester, Los Angeles, California.[2]

The airline was named after the Flying Tigers fighter unit of World War II, officially the 1st American Volunteer Group. Ten former AVG pilots formed the Flying Tiger Line (originally called National Skyway Freight) after returning to the United States in 1945, using a small fleet of Budd Company C-93 Conestoga freighters purchased as war surplus from the United States Navy.[3] The pilots and two ground crew provided half of the initial investment, with the balance coming from California oil tycoon Samuel B. Mosher.[4] For the next four years, Flying Tiger Line carried air freight on contract throughout the U.S. and, as the airline expanded, carrying supplies to U.S. troops under Gen. Douglas MacArthur during the occupation of Japan.[4]

During the Korean War, Flying Tiger aircraft were chartered to transport troops and supplies from the United States to Asia; Flying Tigers later received a cargo route award to Japan, China, and Southeast Asia. The airline also played a major role in the construction of the Distant Early Warning Line, flying equipment to remote outposts in northern Canada and Alaska. 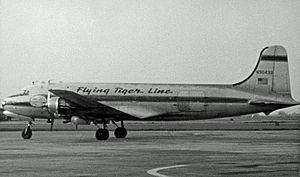 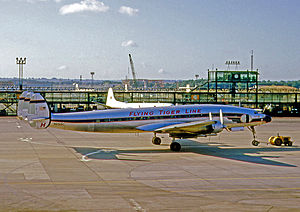 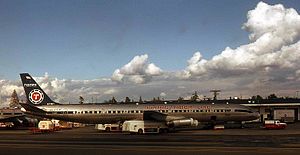 The airline's first DC-8-63F. delivered to the Airline taken at Seattle airport in 1972.

Flying Tiger Line adopted the Canadair CL-44 swing-tail aircraft in 1961, becoming one of the first carriers in the world to offer aerial pallet shipping service. In 1965, Flying Tiger Line began operating jet aircraft when on September, 27, the first (as N322F) of four Boeing 707 was delivered. The Boeing 707 remained in the fleet only few years, and later sold, upon arrival of the higher-payload Douglas DC-8, the largest civilian airliner until the Boeing 747 entered service. The first Douglas DC-8-63F registered as N779FT was delivered to the airline on June 26, 1968 and the other eighteen followed until 1972.[5]

In 1974, the airline took delivery of its first Boeing 747. The Flying Tiger Line then put in orders for brand new Boeing 747-200F freighters designated the Boeing 747-249F, which at the time were among the heaviest commercial airplanes flying, weighing in at 823,000 pounds. These aircraft had the powerful "Q" (Pratt & Whitney JT9D-7Q) engines and heavy landing gear and could simultaneously carry both 250,000 pounds of fuel and 250,000 pounds of cargo loaded through both the nose door and the side door at the same time. Aircraft loaders had earlier refused to work at the extreme 30 foot height necessary for putting freight on the upper deck, so the "supernumerary area" or "hump" was configured with 19 first class seats instead which were used to transport livestock handlers, charter agents and mechanics as well as dead-heading pilots and stewardesses.

Tiger's Ad Hoc Charter livestock flights provided airlift for exotic animals. Two examples were thoroughbred racehorses and show animals from Stansted, England to the Melbourne Cup, as well as breeding stock cattle (milk supply) to nations such as Japan and Thailand. They became known for carrying a number of unique cargoes, including Shamu the SeaWorld killer whale and the torch of the Statue of Liberty.

By the mid-1980s, Flying Tigers operated scheduled cargo service to six continents and served 58 countries. It surpassed Pan American World Airways in 1980 as the world's largest air cargo carrier after acquiring its rival cargo airline Seaboard World Airlines on 1 October 1980. It also operated military contract services, most notably DC-8 routes between Travis Air Force Base, California and Japan in the 1970s, followed by weekly 747 passenger service between Clark Air Base, Philippines, and St. Louis, Missouri via Japan, Alaska, and Los Angeles during the 1980s. Covert flights for the military were not uncommon throughout the airline's history, given its roots in Civil Air Transport (CAT), as with its sister airline Air America, originally owned by General Claire Lee Chennault, commander of the Flying Tigers fighter squadron in Southeast Asia.

At its peak, the Tigers employed approximately 251 flight attendants and carried up to a record 594 passengers and crew on its MAC all-coach passenger flights. Approximately 998 pilots worked for the airline based throughout the country. Large crew bases were situated at Los Angeles, New York City and Lockbourne, Ohio (Rickenbacker International Airport). The Los Angeles headquarters operation included its own engine shop and jet maintenance business. Flying Tigers also made livestock carriers for airplanes, some comparable in external size and shape to the standard AMJ container used in the FedEx flight operations. They even operated a recording company subsidiary, Happy Tiger Records, from 1969 to 1971.[6][7]

After airline deregulation, however, stiff competition buffeted profits and, with some unsuccessful diversification attempts by parent Tiger International, the airline began sustaining losses in 1981.[4] Then-CEO Stephen Wolf sold Flying Tigers to Federal Express in December 1988. On August 7, 1989 Federal Express merged Flying Tigers into its operations, and the Flying Tigers name passed into history.

At the time of its sale Flying Tigers were operating the following aircraft: