The Luxembourg Army is the national military of Luxembourg. Luxembourg has no navy, as the country is landlocked, or air force, although it does have aircraft. The Luxembourg Army was integrated into the Force Publique (Public Force) which included the Gendarmerie and the Police. The Gendarmerie was merged into the Grand Ducal Police in 2000. The army has been an all-volunteer force since 1967.[2] It has a current strength of approximately 450 professional soldiers, 340 enlisted recruits and 100 civilians, and a total budget of $369 million, or 0.9% of GDP.[when?]

Luxembourg has participated in the Eurocorps since 1994, has contributed troops to the UNPROFOR and IFOR missions in former Yugoslavia, and participates with a small contingent in the current NATO SFOR mission in Bosnia and Herzegovina. The Luxembourg army is integrated into the Multinational Beluga Force under Belgian command. Luxembourg troops have also deployed to Afghanistan to support ISAF. Luxembourg has financially supported international peacekeeping missions during the 1991 Gulf War, in Rwanda and, more recently, Albania. The army also has participated in humanitarian relief missions such as setting up refugee camps for Kurds and providing emergency supplies to Albania.

On 8 January 1817, the Grand Duke of Luxembourg, William I published a constitutional law governing the organization of a Militia, the main provisions of which were to remain in force until the Militia was abolished in 1881.[3] The law fixed the militia's strength at 3,000 men.[3] Up until 1840, Luxembourg’s militiamen served in units of the Royal Netherlands Army.[3] Enlisted men served for 5 years, although only the first year consisted of active service, whereas for the subsequent 4 years they were only mobilised 3 times per year.[3]

In 1839 William I became a party to the Treaty of London: the Grand-Duchy lost its western, francophone territories to Belgium, now the province of Luxembourg.[4] The militia lost half of its strength, due to the country having 160,000 inhabitants.[4] Under the terms of the Treaty, Luxembourg and the newly formed Duchy of Limburg, both members of the German Confederation, were together required to provide a Federal Contingent distributed among a Light Infantry Battalion garrisoned in Echternach, a Cavalry Squadron in Diekirch, and an Artillery detachment in Ettelbruck.[4] In 1846 the Cavalry and Artillery units were disbanded and the Luxembourg Contingent was separated from the Limburg Contingent.[4] The establishment was now two Light Infantry Battalions, the first Battalion in Echternach and the second in Diekirch, two reserve Companies and a depot Company.[4]

In 1866, the Austro-Prussian war resulted in the dissolution of the German Confederation. In the 1867 Treaty of London, Luxembourg was declared neutral in perpetuity, and its fortress was demolished over the following years in accordance with the Treaty. The Prussian garrison left the fortress that year, and the two battalions of Luxembourgish light infantry entered the city of Luxembourg in September 1867.[4]

A new military organization was established in 1867 with two Battalions known as the Corps des Chasseurs Luxembourgeois, with a total strength of 1,568 officers and men.[5] In 1868 the contingent became one Light Infantry Battalion of 4 Companies, with a strength of 500 men. On 16 February 1881, the Light Infantry Battalion was disbanded with the abolition of the militia-based system.[5] 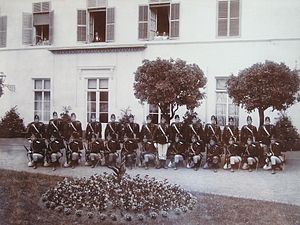 Soldiers of the Corps des Gendarmes et Volontaires pose for a photograph, 1910. 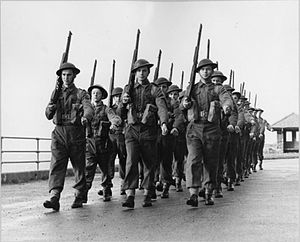 During World War II, the Luxembourg Government in exile in London made agreements for a group of seventy Luxembourg volunteers to be assigned in 1944 to the Artillery Group of the 1st Belgian Infantry Brigade, commonly known as the Brigade Piron.[6] This contingent was named the "Luxembourg Battery". Initially it was under Belgian officers; later, from August 1944, these were joined by Luxembourgish officers, who had received officer training in Britain.[6]

The Luxembourg Battery was equipped with four Ordnance QF 25 pounder howitzers, each of which was named after the children of Grand Duchess Charlotte: Princesses Elisabeth, Marie Adelaide, Marie Gabriele and Alix.[6]

Of the Luxembourgers, several of the NCOs and half of the troops had fought in North Africa in the French Foreign Legion.[6] The rest were people who had escaped from Luxembourg, and young men who were evading forcible conscription into the Wehrmacht by fleeing to Britain.[6] The Luxembourg unit landed in Normandy on 6 August 1944, two months after the D-Day landings.

In 1944 obligatory military service was introduced. In 1945, the Corps de la Garde Grand Ducale (Grand Ducal Guard Corps), garrisoned in the Saint-Esprit barracks in Luxembourg City and the 1st and 2nd Infantry Battalions were established, one in Walferdange and the other in Dudelange. The Luxembourg Army took charge of part of the French zone of occupation in Germany, the 2nd Battalion occupying part of the Bitburg district and a detachment from the 1st Battalion part of the Saarburg district. The 2nd Battalion remained in Bitburg until 1955. Luxembourg signed the Treaty of Brussels in March 1948, then the North Atlantic Treaty in 1949.

On the 28 February 1966 the Grand Ducal Guard was officially disbanded. 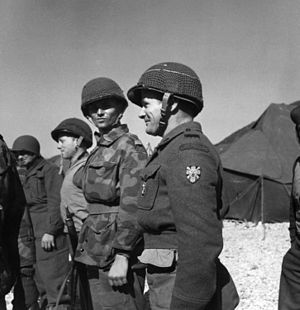 In 1950 seventeen countries, including Luxembourg, decided to send armed forces to assist the Republic of Korea. The Luxembourg contingent was incorporated into the 'Belgian United Nations Command' or the 'Korean Volunteer Corps'. The Belgo-Luxemburgish battalion arrived in Korea in 1951 and was attached to the US 3rd Infantry Division. Two Luxemburger soldiers were killed and 17 were wounded in the war. The Belgo-Luxemburgish battalion was disbanded in 1955.

In 1954 the Groupement Tactique Régimentaire (GTR), (Regimental Tactical Group) was established as Luxembourg’s contribution to NATO and consisted of three Infantry Battalions, an Artillery Battalion, a Services Company, a Medical Company, a Transport Company, a Signals Company, a Company of Engineers, a Heavy Mortar Company, a Reconnaissance Company and a Headquarters Company.

In addition to the GTR, the Army also included the Home Command comprising a Headquarters Company, a Company of Military Police, a Movements and Transportation Company, a Static Guard Battalion, and a Mobile Battalion. The GTR was disbanded in 1959. 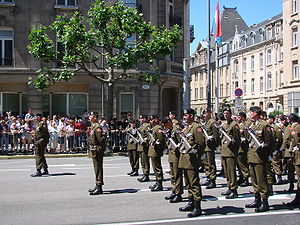 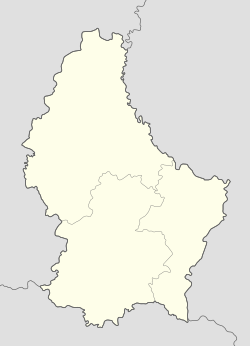 The army of Luxembourg is a battalion sized formation with four separate companies which come under the control of the Centre Militaire (Military Centre), located in the "Caserne Grand-Duc Jean" barracks on Herrenberg near the town of Diekirch.

Compagnie A is the first of two rifle companies and it forms the Luxembourg contingent of the Eurocorps and will normally be integrated into the Belgian contribution during operations. As such it participates in Eurocorps' contribution to the NATO Response Force (entire company) and the EU Battlegroups (one platoon). The company consists of a command element and three reconnaissance platoons of four sections each plus a command section. Each section is equipped with two armored M1114 HMMWV armed with a .50 M2 Browning machine gun. The command section has a MAN X40 truck in addition to its pair of HMMWVs.

Compagnie B was the educational unit of the army, providing various educational courses for personnel to take in preparation for advancement. On May 19, 2011 Company B was redesignated as the Service de Reconversion (Reconversion Service) with the mission to prepare volunteer soldiers for the return to civilian life.[7] The service includes the L'Ecole de l'Armee (Army School). In order to attend this school a soldier must have at least 18 months of service. The School is divided into two sections:

The Compagnie Commandement et Instruction (Staff & Instruction Company) is the main military training unit of the Luxembourg Army, with instruction given in:

The Company is also responsible for the army's Elite Sports Section - this is for sportsmen who choose to join the army. Following their basic training, they join the Section de Sports d'Elite de l'Armée (SSEA).

Luxembourg has two reconnaissance platoons, declared to NATO's Allied Mobile Force. They are elite rather than special forces.

Luxembourg military uniforms are similar to British uniforms. The military had dress, service or garrison, and field uniforms often worn with a black beret. Dress uniforms were worn mostly on formal occasions. The service uniform was worn for daily duty. Luxembourg Army uniforms consisted of service and field attire for both summer and winter and a dress uniform and mess jacket for officers. The winter service dress uniform, of olive drab wool, consisted of a single-breasted coat having patch pockets with flaps, a khaki shirt and tie, and trousers that were usually cuffless. The summer uniform was similar but was made of light tan material. Combat uniforms in olive-green, khaki-drab, or woodland camouflage pattern, worn with the United States PASGT helmet, are virtually indistinguishable from those worn until the 1990s by the United States Army

Those who have completed high school will enter a special 13-week-basic training in the army as warrant officer, thus visiting the military officer school after for 5 years (normally in Brussels, Belgium), before becoming a lieutenant in the Luxembourg army.

Aspiring officers are sent to the Belgian École Royale Militaire in Brussels, or the Ecole Spéciale Militaire de Saint-Cyr in France. After the first two years at these schools, officer-cadets receive the title of lieutenant.[8]

After leaving the above schools, the officer candidates become probationary officers for a period of 24 months.[8] The probation period is composed of specialised military branch training at a school abroad, and practical service within one of the Army's units. If they succeed this probation, their appointment as lieutenants is made permanent.[8]

Those who have completed five years of high school and have served a 4 months as voluntary soldier, will do a 9-month-stage at the Infantry Training Department of the Belgian Army in Arlon, before becoming a sergeant in the Luxembourg army.

Those who haven't completed five years of high school may, after 3 years of service, become career corporals in the Luxembourg Army, if they pass physical and mental tests. They also have to pass a part of the NCO School in Belgium. 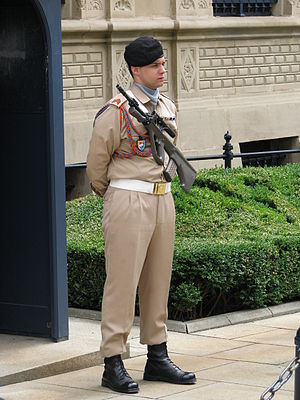 Guard in front of the Grand Ducal Palace, Luxembourg in 2009 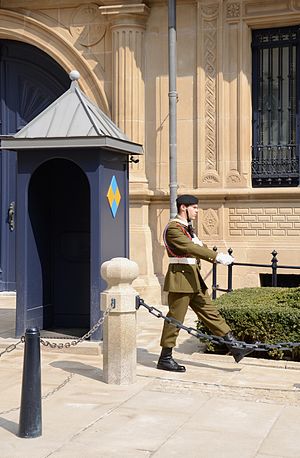 Guard in front of the Grand Ducal Palace, Luxembourg in 2013 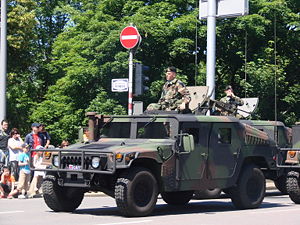 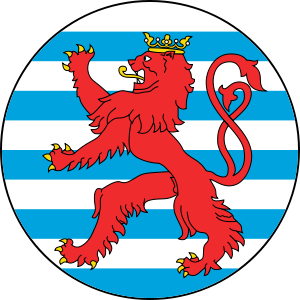 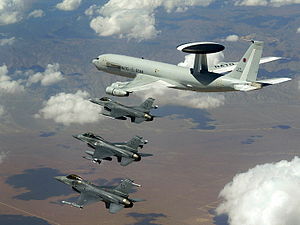 A NATO E-3 with the roundel of Luxembourg painted on its tail.

NATO acquired 18 E-3A AWACS aircraft, with a decision to register them in Luxembourg, because until that point Luxembourg did not have an air force. The first E-3 was delivered in January 1982. Presently there are seventeen E-3As in the inventory, with one loss in July 1996. The aircraft are registered to Luxembourg, flown by NATO pilots, and based at the NATO Air Base Geilenkirchen.