Faust is a tragic play in two parts by Johann Wolfgang von Goethe, usually known in English as Faust, Part One and Faust, Part Two. Nearly all of Part One and the majority of Part Two are written in rhymed verse. Although rarely staged in its entirety, it is the play with the largest audience numbers on German-language stages. Faust is considered by many to be Goethe's magnum opus and the greatest work of German literature.[1]

The earliest forms of the work, known as the Urfaust, were developed between 1772 and 1775; however, the details of that development are not entirely clear. Urfaust has twenty-two scenes, one in prose, two largely prose and the remaining 1,441 lines in rhymed verse. The manuscript is lost, but a copy was discovered in 1886.[2]

The first appearance of the work in print was Faust, a Fragment, published in 1790. Goethe completed a preliminary version of what is now known as Part One in 1806. Its publication in 1808 was followed by the revised 1828–29 edition, the last to be edited by Goethe himself.

Goethe finished writing Faust, Part Two in 1831; it was published posthumously the following year. In contrast to Faust, Part One, the focus here is no longer on the soul of Faust, which has been sold to the devil, but rather on social phenomena such as psychology, history and politics, in addition to mystical and philosophical topics. The second part formed the principal occupation of Goethe's last years.

The original 1808 German title page of Goethe's play read simply: "Faust. / Eine Tragödie" ("Faust. / A Tragedy"). The addition of "erster Teil" (in English, "Part One") was retrospectively applied by publishers when the sequel was published in 1832 with a title page which read: "Faust. / Der Tragödie zweiter Teil" ("Faust. / The Tragedy's Second Part").

The two plays have been published in English under a number of titles, and are usually referred to as Faust, Parts One and Two. 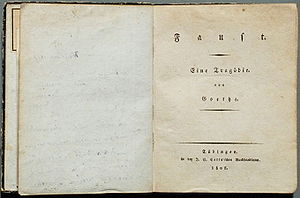 The principal characters of Faust Part One include:

Faust, Part One takes place in multiple settings, the first of which is Heaven. Mephistopheles (Satan) makes a bet with God: he says that he can lure God's favourite human being (Faust), who is striving to learn everything that can be known, away from righteous pursuits. The next scene takes place in Faust's study where Faust, despairing at the vanity of scientific, humanistic, and religious learning, turns to magic for the showering of infinite knowledge. He suspects, however, that his attempts are failing. Frustrated, he ponders suicide, but rejects it as he hears the echo of nearby Easter celebrations begin. He goes for a walk with his assistant Wagner and is followed home by a stray poodle.

In Faust's study, the poodle transforms into Mephistopheles. He proposes a wager to Faust: If Mephistopheles can grant Faust a moment of transcendence on Earth, a moment that he wishes to remain forever, then he will instantly die and serve the Devil in Hell. Faust does not believe that Mephistopheles can accomplish this and accepts the wager.

When Mephistopheles tells Faust to sign the pact with blood, Faust complains that Mephistopheles does not trust Faust's word of honor. In the end, Mephistopheles wins the argument and Faust signs the contract with a drop of his own blood. Faust has a few excursions and then meets Margaret (also known as Gretchen). He is attracted to her and with jewelry and with help from a neighbor, Marthe, Mephistopheles draws Gretchen into Faust's arms. With Mephistopheles' aid, Faust seduces Gretchen. Gretchen's mother dies from a sleeping potion, administered by Gretchen to obtain privacy so that Faust could visit her. Gretchen discovers she is pregnant. Gretchen's brother condemns Faust, challenges him and falls dead at the hands of Faust and Mephistopheles. Gretchen drowns her illegitimate child and is convicted of the murder. Faust tries to save Gretchen from death by attempting to free her from prison. Finding that she refuses to escape, Faust and Mephistopheles flee the dungeon, while voices from Heaven announce that Gretchen shall be saved – "Sie ist gerettet" – this differs from the harsher ending of Urfaust – "Sie ist gerichtet!" – "she is condemned."

Rich in classical allusion, in Part Two the romantic story of the first Faust is put aside, and Faust wakes in a field of fairies to initiate a new cycle of adventures and purpose. The piece consists of five acts (relatively isolated episodes) each representing a different theme. Ultimately, Faust goes to Heaven, for he loses only half of the bet. Angels, who arrive as messengers of divine mercy, declare at the end of Act V: "He who strives on and lives to strive / Can earn redemption still" (V, 11936–7).

Relationship between the parts

Throughout Part One, Faust remains unsatisfied; the ultimate conclusion of the tragedy and the outcome of the wagers are only revealed in Faust, Part Two. The first part represents the "small world" and takes place in Faust's own local, temporal milieu. In contrast, Part Two takes place in the "wide world" or macrocosmos.

In 1821, a partial English verse translation of Faust (Part One) was published anonymously by the London publisher Thomas Boosey and Sons, with illustrations by the German engraver Moritz Retzsch. This translation was attributed to the English poet Samuel Taylor Coleridge by Frederick Burwick and James C. McKusick in their 2007 Oxford University Press edition, Faustus: From the German of Goethe, Translated by Samuel Taylor Coleridge.[3] In a letter dated 4 September 1820, Goethe wrote to his son August that Coleridge was translating Faust.[4] However, this attribution is controversial: Roger Paulin, William St. Clair, and Elinor Shaffer provide a lengthy rebuttal to Burwick and McKusick, offering evidence including Coleridge's repeated denials that he had ever translated Faustus and arguing that Goethe's letter to his son was based on misinformation from a third party.[5]

Coleridge's fellow Romantic Percy Bysshe Shelley produced admired[6] fragments of a translation first publishing Part One Scene II in The Liberal magazine in 1822, with "Scene I" (in the original, the "Prologue in Heaven") being published in the first edition of his Posthumous Poems by Mary Shelley in 1824.[7]

In August 1950, Boris Pasternak's Russian translation of the first part led him to be attacked in the Soviet literary journal Novy Mir. The attack read in part,

... the translator clearly distorts Goethe's ideas... in order to defend the reactionary theory of 'pure art' ... he introduces an aesthetic and individualist flavor into the text... attributes a reactionary idea to Goethe... distorts the social and philosophical meaning...[12]

In response, Pasternak wrote to Ariadna Èfron, the exiled daughter of Marina Tsvetaeva:

There was some alarm when my Faust was torn to pieces in Novy mir on the basis that supposedly the gods, angels, witches, spirits, the madness of poor Gretchen and everything 'irrational' was rendered too well, whereas Goethe's progressive ideas (which ones?) were left in the shade and unattended.[13]

In music and film