The Green League (Finnish: Vihreä liitto, Vihr.; Swedish: Gröna Förbundet) is a green[4][5] and green-liberal political party in Finland. It has fifteen seats in the Finnish Parliament and one in the European Parliament. The current chairperson is Ville Niinistö.

Founded in 1987, the party absorbed a number of green organisations, including four MPs elected in 1987. The party won ten seats in the 1991 election. Despite falling to nine seats in 1995, Pekka Haavisto, joined Paavo Lipponen's rainbow coalition first cabinet, making the Green League the first Green party in a national cabinet. The party remained in government until 2002, when it left in opposition to nuclear power. In 2007, the party peaked at 15 seats, and joined the centre-right government. At the 2011 election, the party fell to ten seats. Nevertheless, since the only winner of the 2011 elections chose to remain in opposition, the Greens were invited to join a six-party rainbow coalition government.

The party sits in the centre of the political spectrum, criticising both socialism and the free market. The party is a member of the Global Greens and the European Green Party, while its MEP sit with The Greens–European Free Alliance in the European Parliament. Originally split on whether Finland should join the European Union, the Green League is now pro-European and was the first Finnish party to support a federal Europe.[6]

The party was founded February 28, 1987, and registered as a political party the next year. Political activity had begun already in the early 1980s, when environmental activists, feminists, several former members of the marginalized Liberal People's Party and other active groups began to campaign on Green issues in Finland. In 1995 it was the first European Green party to be part of a state-level Cabinet.

The party was founded as a popular movement, and thus retains the descriptor liitto, "league". Initially, there was much resistance within the movement against the founding of a political party, motivated by Robert Michels' iron law of oligarchy, which claims that movements inevitably degenerate into oligarchies when they create a formal organization.[7] The party still especially stresses openness and democratic decision-making. The liitto was later dropped from the Finnish and Swedish names in advertisements; the official name remains.

The first two parliamentary representatives were elected even before the registration, in the elections of 1983. These were the first independent representatives in the Finnish parliament. In 1987 the number of seats rose to four, and in 1991 to ten.

About half of Green were against joining the European Union in 1994. Later, polls showed that most Greens were anti-Eurozone.[8] The party heads declined to fight against euro adoption.

In the 1995 election the Green League received a total of nine seats (out of 200), joined the coalition-cabinet led by the Social Democrats, and Pekka Haavisto became the minister of Environment and Development Aid, thus becoming the first green minister in Europe. The Green League received 7.3% of the vote, and gained two additional seats in 1999, raising the total to 11. The Greens continued in the next coalition-cabinet, but resigned in protest on May 26, 2002, after the cabinet's decision to allow the construction of a new nuclear plant was accepted in the parliament. In 2003 the Green League received 8.0% of the vote, giving a total of 14 seats. They increased their seats to 15 in 2007 elections when they received 8.5%. In the 2011 election, however, the party lost five seats.

As of the 2009 elections, two of the thirteen Finnish representatives in the European Parliament are Green: Satu Hassi and Heidi Hautala.

At the municipal level, Greens are an important factor in the largest cities of Finland. In the municipal election of 2008 the Greens had 8.9% of the vote; the vote share was considerably higher in Helsinki (the capital), where the Greens became were the second largest party with 23.2% of the vote.[9] In several other cities the Greens achieved the position of the third largest party. Its weak spot is the rural countryside, particularly municipalities experiencing strong outward migration.

A 2012 study indicated that the Greens have an especially strong support among journalists, among whom they are the most popular party.[10]

The Federation of Green Youth and Students is the Green League's youth organisation. 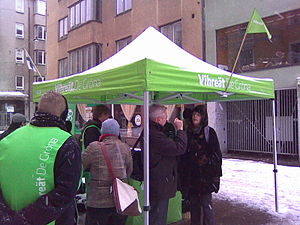 An election canvassing tent for the Greens in Finland, in Iso-Roobertinkatu, Helsinki.

Vihreät is no longer a protest party, nor an alternative movement. Some Green candidates in the elections reject classification as "left" or "right". Economic opinions of the members range between left and right.[7] However, on average members of party place their party between the Left Alliance and Social Democrats.[11] In comparison with some other European green parties, the Finnish Greens are noticeably more pro-European and centrist, which is likely due to many former liberals joining the party.[citation needed]

In the party program, the Green League has criticized both the market economy and socialism.[citation needed] In the chamber of the Parliament and assembly rooms of local councils, Green League representatives sit between the Finns and the Social Democrats. The Greens often identify themselves as social liberals. The party is one of the strongest proponents for same-sex marriage. The party is also distinct in its opposition against universal male conscription and wants to opt for a gender-neutral, selective version. The eventual goal of the Greens is voluntary military service.

The party's latest policy platform on immigration has called for immigrants to study Finland's official languages, Finnish or Swedish, or lose social welfare benefits. Green Party chair and Labour Minister Anni Sinnemäki states it is an immigrant's duty to learn the language of their new home country.[12]

In 2015, the party included the universal basic income as a major proposal in their platform.[13] 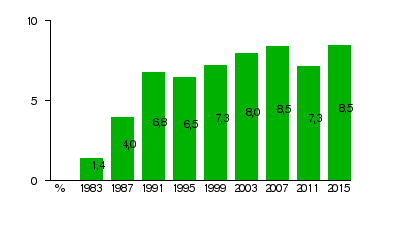 The following 15 Green politicians were elected to the Finnish Parliament in the April 2015 parliamentary election.[14]

Current members of the European parliament

Since 2014 the Green league is represented with 1 MEP in the European parliament: