The Centre Party of Finland (Finnish: Suomen Keskusta, Kesk; Swedish: Centern i Finland) is a centrist,[3] agrarian,[3][4][5][6] and liberal[4][5][7] political party in Finland. It is one of the four largest political parties in the country, along with the National Coalition Party, the Social Democratic Party and The Finns Party, and currently has 49 seats in the Finnish Parliament. The Centre Party chairman is Juha Sipilä, who was elected in June 2012 to follow Mari Kiviniemi, the ex-Prime Minister of Finland.

Founded in 1906 as the Agrarian League, the party represented rural communities and supported decentralisation of political power from Helsinki. In the 1920s, the party emerged as the main rivals to the Social Democratic Party, and the party's first Prime Minister, Kyösti Kallio, held the office four times between 1922 and 1937. After World War II, the party settled as one of the four major political parties in Finland. Urho Kekkonen served as President of Finland from 1956 to 1982: by far the longest period of any President. The name 'Centre Party' was adopted in 1965, and 'Centre of Finland' in 1988. The Centre Party was the largest party in Parliament from 2003 to 2011, during which time Matti Vanhanen was Prime Minister for seven years. Following the 2011 election, the party was reduced in parliamentary representation from the largest party to the fourth largest, but in 2015 it reclaimed its status as the largest party.

The Centre Party's political influence is greatest in small and rural municipalities, where it often holds a majority of the seats in the municipal councils. Decentralisation is the policy that is most characteristic of the Centre Party. The Centre has been the ruling party in Finland a number of times since Finnish independence. 12 of the Prime Ministers of Finland, three of the Presidents and a former European Commissioner for Economic and Financial Affairs have been from the party. The Finnish Centre Party is the mother organisation of Finnish Centre Youth, Finnish Centre Students, and Finnish Centre Women.

Founding of the party

The party was founded in 1906 as a movement of citizens in the Finnish countryside. Before Finnish independence, political power in Finland was centralised in the capital and to the estates of the realm. The centralisation gave space for a new political movement. In 1906 two agrarian movements were founded. They merged in 1908 to become one political party known as the Agrarian League or Maalaisliitto. An older, related movement was the temperance movement, which had overlapping membership and which gave future Agrarian League activists experience in working in an organisation.[8]

Soon the ideas of humanity, education, the spirit of the land, peasant-like freedom, decentralisation, "the issue of poor people", progressivism,[9] and later the "green wave" became the main political phrases used to describe the ideology of the party. Santeri Alkio was the most important ideological father of the party.

Defending the republic against monarchists

At the dawn of Finnish independence conservative social forces made an attempt to establish the Kingdom of Finland. The Agrarian League opposed monarchism fiercely[9] even though monarchists claimed that a new king from the German Empire and Hohenzollern would have safeguarded Finnish foreign relations. At this time, anti-anarchist peasants threatened the existence of the party.[10][11]

The Agrarian League managed to maintain the republican voices in the Parliament until the fall of the German Empire, which ruined the dreams of the monarchists.[13]

The relentless opposition to the monarchy was rewarded in the parliamentary election 1919 and the party became the biggest non-socialist party in Finland with 19.7% of the votes.

After the 1919 election, the centrist and progressive forces, including the Agrarian League, were constant members in Finnish governments. Their moderate attitude in restless post-war Finland secured a steady growth in following elections. The Party formed many centrist minority governments with National Progressive Party and got its first Prime Ministers Kyösti Kallio 1922 and Juho Sunila 1927.

Conciliatory power between the extreme right and left

For the Agrarian League, the centrist governments were just a transitional period towards an era, which would integrate the "red" and "white" sides of the Civil War into one nation. Nevertheless, not everyone were happy with the conciliatory politics of centrist governments. The extreme right Lapua Movement grew bigger and bigger in the Agrarian League strongholds in the countryside. Many party members joined the new radical movement. The Lapua Movement organised assaults and kidnappings in Finland between 1929 and 1932. In 1930, after the kidnapping of progressive president Kaarlo Juho Ståhlberg, the Agrarian League broke off all its ties to the movement and got a new political enemy in the countryside - The Patriotic People's Movement (IKL), which was founded after the Lapua Movement was outlawed.[14]

In the parliamentary election 1933 the main campaign issues were the differing attitudes towards democracy and the rule of law between the Patriotic Electoral Alliance (National Coalition Party and Patriotic People's Movement) and the Legality Front (Social Democrats, Agrarian League, Swedish People's Party and Progressives). The Patriotic Electoral Alliance favoured continuing the search for suspected Communists - the Communist Party and its affiliated organizations in the spirit of the Lapua Movement. The Legality Front did not want to spend any significant time on searching suspected Communists, but rather wanted to concentrate on keeping the far-right in check. The Legality Front won the elections, but the Agrarian League lost a part of its support.[15][16]

Cooperation with the Social Democrats before World War II

Finland's president, centrist Kyösti Kallio, on a visit to a military hospital Christmas 1939.

Because of fierce opposition of the President Pehr Evind Svinhufvud the Social Democrats remained outside the government and the Agrarian League was part of the centre-right governments until 1937. In 1937 Presidential election the Agrarian League candidate Kyösti Kallio was elected president with the votes of centrist (Agrarian and Progressive) and social-democratic coalition which wanted to ensure that President Svinhufvud would not be re-elected. The new president allowed the first centre-left government to be formed in Finland. A new era had begun.

With the outbreak of the Winter War a government of national unity was formed. President Kallio died shortly after the war. 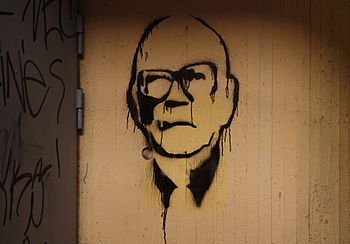 Urho Kekkonen was the President of Finland from 1956 to 1982 and became a symbolic figure of a statesman in Finland. Graffiti representing Kekkonen in Pieksämäki, Finland.

In 1956, Urho Kekkonen, the candidate of the Agrarian League, was elected President of Finland, after serving as Prime Minister several times. Kekkonen remained President until 1982. Kekkonen continued the “active neutrality” policy of his predecessor President Juho Kusti Paasikivi, a doctrine which came to be known as the “Paasikivi–Kekkonen line”. Under it, Finland retained its independence while being able to trade with both NATO members and those of the Warsaw Pact.

Veikko Vennamo, a vocal Agrarian politician, ran into serious disagreement particularly with Arvo Korsimo, then Party Secretary of the Agrarian Union, and was excluded from the parliamentary group. As a result, Vennamo immediately started building his own organization and founded a new party, the Finnish Rural Party (Suomen maaseudun puolue, SMP) in 1959. Vennamo was a populist and became a critic of Kekkonen and political corruption within the "old parties", particularly the Centre Party. Although this party had minor successes, it was essentially tied to Veikko Vennamo's person. His son Pekka Vennamo was able to raise the party to new success in 1983, but after this the Rural Party's support declined steadily and eventually the party went bankrupt in 1995. However, immediately after this, the right-wing populist party True Finns (Perussuomalaiset) was founded by former members of SMP.

From Agrarian League to Centre Party

In 1965, the party changed its name to "Centre Party" or Keskustapuolue and in 1988 took its current name Suomen Keskusta (literally Centre of Finland). Despite urbanisation of Finland and a temporary nadir in support, the party managed to continue to attract voters.

EU membership - a divisive issue within the party 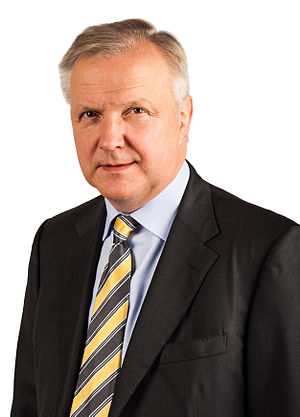 The Centre Party was a key player in making the decision to apply for Finnish EU membership in 1992. As the leading governing party its support for the application was crucial. The party itself, both leadership and supporters, was far from united on the issue. In the parliament 22 out of 55 Centre MPs voted against the application. In June 1994 the party congress decided to support EU membership (by 1607 votes to 834), but only after the Prime Minister and party chairman Esko Aho threatened to resign if the party were to oppose the membership.

The centrist tradition of defending equal political and economic rights for peripheral areas was reflected in the internal resistance that opposed chairman Aho's ambitions to lead Finland to the EU.[18] The Centre Party was in opposition 1995—2003 and opposed adopting the euro as Finland's currency. However, after regaining power in 2003, the party accepted the euro. 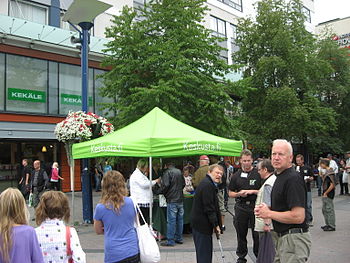 A Centre Party campaign in Jyväskylä.

The ideology of the party is unusual in the European context. Unlike many other large parties in Europe its ideology is not primarily based on economic systems. Rather the ideas of humanity, education, the spirit of the land, peasant-like freedom, decentralization, "the issue of poor people", environmentalism and progressivism play a key role in Centrist politician speeches and writings.[9] From the very beginning of its presence, the party has supported the idea of decentralisation.[9]

Despite belonging to the Liberal International, the Centre Party does not play quite the same role in Finnish politics as do liberal parties in other countries, because the party evolved from agrarian roots. The party has a more conservative wing, and prominent conservatives within the party, such as Paavo Väyrynen, have criticised overt economic and social liberalism.[19] In addition, in 2010 the party congress voted to oppose same-sex marriage.[20] When the Finnish Parliament voted on same-sex marriage in 2014, 30 of the 36 Centre MPs voted against it.[21]

The party is also divided on the issue of deepening European integration,[22] and contains a notable eurosceptic faction based on its more rural interests. The party expressly rejects a federal Europe. The party was originally opposed to Finland's membership in the Euro currency, but later stated that it would not seek to withdraw from the Economic and Monetary Union once Finland had entered.

In Finland, there is no large party that supports liberalism per se. Instead, liberalism is found in most major parties including the Centre Party, which supports decentralisation, free will, free and fair trade, and small enterprise. The Centre Party characteristically supports decentralisation, particularly decreasing the central power, increasing the power of municipalities and populating the country evenly. During the party's premierships 2003—2011 these policies were also manifested as transferrals of certain government agencies from the capital to smaller cities in the regions.

Throughout the period of Finland's independence the Centre Party has been the party most often represented in the government. The country's longest-serving president, Urho Kekkonen, was a member of the party, as were two other presidents.

Today, only a small portion of the votes given to the party come from farmers and the Centre Party draws support from a wide range of professions. However, even today rural Finland and small towns form the strongest base of support for the party, although it has strived for a breakthrough in the major southern cities as well. In the 2011 parliamentary election the party received only 4.5 per cent of votes cast in the capital Helsinki, compared to 33.4 per cent in the largely rural electoral district of Oulu.[23]

In the organisation of the Centre Party, local associations dominate the election of party leaders, the selection of local candidates and drafting of policy. The Headquarters in Apollonkatu, Helsinki leads financing and organisation of elections.

The Party Congress is the highest decision making body of the party. It elects the Chairman, three Deputy Chairmen, the Secretary General and the Party Council.

Chairman of the Parliamentary Group

Deputy Chairmen of the Parliamentary Group

Below is a chart of the results of the Centre Party in Finnish parliamentary elections. 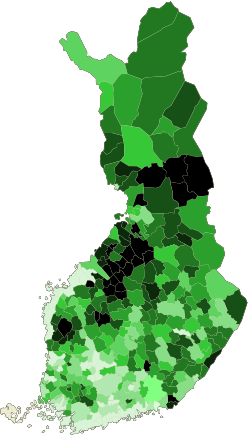 Support for the Centre Party by municipality in the 2011 parliamentary election — the party has traditionally fared strongest in the northern part of the country.