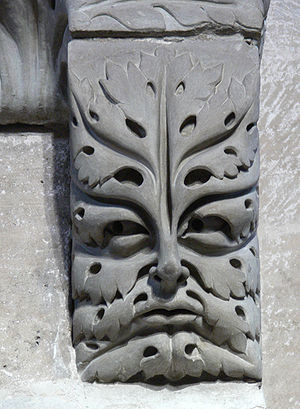 A foliate head in the shape of an acanthus leaf: a corbel supporting the Bamberg Horseman, Bamberg cathedral, Germany, early 13th century

A Green Man Sculpture is a sculpture, or other representation of a face surrounded by or made from leaves. Branches or vines may sprout from the nose, mouth, nostrils or other parts of the face and these shoots may bear flowers or fruit. Commonly used as a decorative architectural ornament, Green Men are frequently found in carvings on both secular and ecclesiastical buildings. "The Green Man" is also a popular name for English public houses and various interpretations of the name appear on inn signs, which sometimes show a full figure rather than just the head.

The Green Man motif has many variations. Found in many cultures from many ages around the world, the Green Man is often related to natural vegetative deities. It is primarily interpreted as a symbol of rebirth, representing the cycle of growth each spring. Some[1][2] speculate that the mythology of the Green Man developed independently in the traditions of separate ancient cultures and evolved into the wide variety of examples found throughout history. 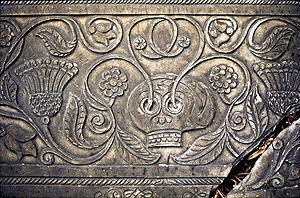 Lady Raglan coined the term "Green Man" in her 1939 article "The Green Man in Church Architecture" in The Folklore Journal.[3] Some commentators conflate or associate the term with "Jack in the Green".[4]

Usually referred to in works on architecture as foliate heads or foliate masks, carvings of the Green Man may take many forms, naturalistic or decorative. The simplest depict a man's face peering out of dense foliage. Some may have leaves for hair, perhaps with a leafy beard. Often leaves or leafy shoots are shown growing from his open mouth and sometimes even from the nose and eyes as well. In the most abstract examples, the carving at first glance appears to be merely stylised foliage, with the facial element only becoming apparent on closer examination. The face is almost always male; green women are rare. Green cats, lions, and demons are also found. On gravestones and other memorials, human skulls are sometimes shown sprouting grape vines or other vegetation, presumably as a symbol of resurrection (as at Shebbear, Devon, England).[citation needed]

The Green Man appears in many forms, with the three most common types categorized as:

Superficially the Green Man would appear to be pagan, perhaps a fertility figure or a nature spirit, similar to the woodwose (the wild man of the woods), and yet he frequently appears, carved in wood or stone, in churches, chapels, abbeys and cathedrals, where examples can be found dating through to the 20th century. The earliest example of a green man disgorging vegetation from his mouth is from St. Abre, in St. Hilaire-le-grand, c. 400 AD.[7]

The tradition of the Green Man being carved on to Christian churches exists across Europe, including examples such as the Seven Green Men of Nicosia in Cyprus, a series of seven green men carved in the thirteenth century on to the facade of St Nicholas Church in Nicosia.

From the Renaissance onwards, elaborate variations on the Green Man theme, often with animal heads rather than human faces, appear in many media other than carvings (including manuscripts, metalwork, bookplates, and stained glass). They seem to have been used for purely decorative effect rather than reflecting any deeply held belief. A Swiss engraver, Numa Guyot[8] created a bookplate depicting a Green Man in exquisite detail. It was completed circa 1887.

In Britain, the image of the Green Man enjoyed a revival in the 19th century, becoming popular with architects during the Gothic revival and the Arts and Crafts era, when it appeared as a decorative motif in and on many buildings, both religious and secular. American architects took up the motif around the same time. The Green Man travelled with the Europeans as they colonized the world. Many variations can be found in Neo-gothic Victorian architecture. He was very popular amongst Australian stonemasons and can be found on many secular and sacred buildings.[citation needed]

American artist Rob Juszak has taken the theme of the Green Man as Earth’s spiritual protector and turned it into a vision of the Green Man cradling the planet; artist Dorothy Bowen created a kimono silk painting, titled Greenwoman, as an expression of the feminine aspect of the legend.[9] 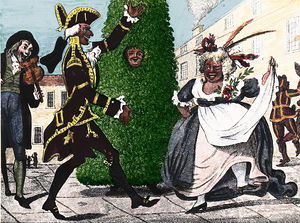 In Thomas Nashe's masque Summer's Last Will and Testament (1592, printed 1600), the character commenting upon the action remarks, after the exit of "Satyrs and wood-Nymphs", "The rest of the green men have reasonable voices ...".

Parallels have been drawn between the Green Man and various deities such as the British Celtic Lud, also known as Nodens. Many see him as being connected to the Mesopotamian Tammuz who is thought to symbolize the triumph of Life over Winter and Death,[11] Osiris, Odin, and even Jesus, as well as later folkloric and literary characters such as the Holly King.

A character superficially similar to the Green Man, in the form of a partly foliate mask surrounded by Bacchic figures, appears at the center of the 4th century silver salver in the Mildenhall Treasure, found at a Roman villa site in Suffolk, England; the mask is generally agreed to represent Neptune or Oceanus and the foliation is of seaweed.[12]

Figures such as the Jewish prophet (Elijah) and (Khidr), Muslim prophet of eternal life, Cernunnos, Sylvanus, Derg Corra, Green George, Jack in the green, John Barleycorn, Robin Goodfellow, Puck, and the Green Knight all share aspects of the Green Man's nature; it has also been suggested that the story of Robin Hood was born of the same mythology. A more modern embodiment is found in Peter Pan, who enters the civilized world from Neverland, clothed in green leaves. Even Father Christmas, who was often shown wreathed in ivy in early depictions, has been suggested as a similar woodland spirit.[13]

In the Germanic nations, such as Germany, Iceland, and England, depictions of the Green Man could have been inspired by deities such as Freyr[14] or Odin, as both have many attributes of the later Green Men from throughout Europe.[15][16][17][18]

Etymological research by the University of Wales into the meaning of the names of Celtic gods and goddesses shows that one Celtic deity, Viridios, has a name meaning "Green Man" in both the Celtic languages and Latin.[citation needed]

In Wicca, the Green Man has often been used as a representation of the Horned God, a syncretic deity that appropriates aspects of, among others, the Celtic Cernunnos and the Greek Pan.

Many forms of Neopaganism consider the green man to represent a common form of personal transformation in meditations or ritual. The icon of the face with leaves sprouting out is a representation of a personal visionary experience of "becoming" a green man or woman.[citation needed]

Sir James Frazer mentions the tradition in The Golden Bough. Kingsley Amis's novel The Green Man (1969) is based a modern incarnation of the ancient pagan monster. Stephen Fry wrote a pastiche of a poem called "The green man" as part of his novel The Hippopotamus. In Charles Olson's book, Archaeologist of Morning, there is a poem entitled "The Green Man". Ronald Johnson also wrote a book-length poem sequence, The Book of the Green Man. The premise has even made its way into comics, most notably with the character of Swamp Thing.

Green men, and variants on the theme, frequently occur in modern fantasy literature and science fiction. Tom Bombadil and the Ents in The Lord of the Rings could be considered possible examples. Elsewhere, Robert Jordan's series The Wheel of Time features a character named Someshta, referred to as "the Green Man". He is the sole survivor of a race called the Nym, who were originally entrusted as the gardeners of the world, and who had the ability to manipulate the life and growth of plants around them.[19] He first appears in book one, The Eye of the World, in chapters 49 ("The Dark One Stirs") and 50 ("Meetings at the Eye"). He later reappears in book four, The Shadow Rising, in chapter 26 ("The Dedicated"), in a ter'angreal located in Rhuidean.

The Green Man is featured in several films, such as The Draughtsman's Contract by Peter Greenaway (1982) and the first episode of The Canterbury Tales by Pier Paolo Pasolini (1972). The 2012 Disney film The Odd Life of Timothy Green also appears to depict a Green Man figure in its title character, a magical child who appears in the garden of a childless couple one night. He has leaves growing on his legs, takes nourishment from sunlight and returns to the earth in the fall, after fulfilling his purpose. 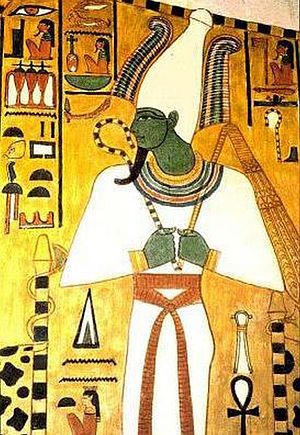 Osiris, ruler of the underworld and of rebirth and regeneration, was typically shown with a green face. (Tomb of Nefertari), 1295-1253 BC

In his A Little Book of The Green Man, as well as his website, Mike Harding gives examples of similar figures in Borneo, Nepal, and India: the earliest is a foliate head from an 8th-century Jain temple in Rajasthan.[20] He also notes that heads from Lebanon and Iraq can be dated to the 2nd century and that there are early Romanesque foliate heads in 11th century Templar churches in Jerusalem. He tentatively suggests that the symbol may have originated in Asia Minor and been brought to Europe by travelling stonecarvers.

On a similar theme, author on spirituality and architecture William Anderson writes:[21]

There are legends of him (Khidr) in which, like Osiris, he is dismembered and reborn; and prophecies connecting him, like the Green Man, with the end of time. His name means the Green One or Verdant One, he is the voice of inspiration to the aspirant and committed artist. He can come as a white light or the gleam on a blade of grass, but more often as an inner mood. The sign of his presence is the ability to work or experience with tireless enthusiasm beyond one's normal capacities. In this there may be a link across cultures, …one reason for the enthusiasm of the medieval sculptors for the Green Man may be that he was the source of every inspiration.

In one of his roles the ancient Egyptian God Osiris is regarded as a corn-deity and is commonly depicted with a green face representing vegetation, rebirth and resurrection. Containers of soil in the shape of Osiris planted with seed ("Osiris Beds") are found in some New Kingdom tombs. The sprouting corn implied the resurrection of the deceased.[22]

Other gods depicted green are (in Tibet) Amogha-siddhi and (in Mexico) Tlaloc.

In Sanskrit the Green Man is cognate with the gana Kirtimukha or "Face Of Glory" which is related to a lila of Shiva and Rahu. The Face of Glory is often seen in Vajrayana Buddhist Thanka art and iconography where it is often incorporated as a cloudform simulacrum; and depicted crowning the 'Wheel of Becoming' or the Bhavachakra.[23]

Khidr or al-Khidr or Abul Abbas Ahmad al Khidr (Arabic: الخضر al-Khiḍr "the Green One", also transcribed as Khidar, Khizr, Khyzer, Khizar) is a revered figure in Islam, whom the Qur'an describes as a righteous servant of God,[24] who possessed great wisdom or mystic knowledge.[24] He is most often said to be a contemporary of Moses, but in other variations of his story, he lived at the same time as Abraham, the mythological Persian king Afridun and Nashiya bin Amus.[25][26] The 18th sura ("The Cave") presents a narrative where Khidr accompanies Moses and tests him about his oath to not ask any questions. Tom Cheetham, an authority on Islamic mysticism, identifies Khidr of esoteric Sufism with the Green Man. In his book about the work of Henry Corbin and others concerning the 12th-century Muslim saint Ibn Arabi, he develops the idea of the Green Man/Khidr as the principle mediating between the imaginary realm and the physical world.[27]