From Infogalactic: the planetary knowledge core
Jump to: navigation, search
For other uses see Hunslet (disambiguation)

Hunslet is an inner-city area in south Leeds, West Yorkshire, England. It is 1 mile (1.6 km) southeast of the city centre and has an industrial past.

Hunslet had many engineering companies based in the district, such as John Fowler & Co. manufacturers of traction engines and steam rollers, the Hunslet Engine Company builders of locomotives (including those used during the construction of the Channel Tunnel), as well as engineering firms Kitson & Co., Manning Wardle and Hudswell Clarke. Many railway locomotives were built in the Jack Lane area of Hunslet.

The area has a mixture of modern and 19th century industrial buildings, terraced housing and 20th century housing. It is an area that has grown up significantly around the River Aire in the early years of the 21st century, especially with the construction of modern riverside flats. It was at one point the main production site for Leeds Creamware, a type of pottery (still produced) so called because of its cream glazing. Hunslet is now prospering as it follows the trend of Leeds generally and the expansion of office and industrial sites south of Leeds city centre. 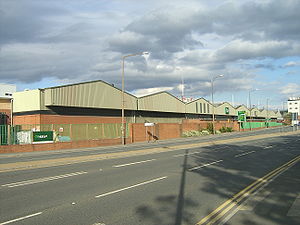 The former Tetley's Brewery in the Crown Point area of Hunslet, Leeds 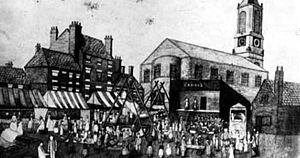 Hunslet is first mentioned as Hunslet in the Domesday Book of 1086, though 12th century spellings of the name such as Hunsflete seem to be more conservative: the name appears originally to have meant 'Hūn's inlet', from an Anglo-Saxon personal name Hūn and the Old English word flēot 'creek, inlet', probably referring to an inlet from the River Aire.[1] At the time of the Domesday survey in 1086, the manor belonged to the Lacys, from whom it passed to various families including the Gascoignes and the Neviles.[2] Hunslet was the birthplace of Thomas Gascoigne, born in 1404 and later chancellor of Oxford University.

In 1823 forty working men from Hunslet raised the sum of £1.5s.1d which they sent to the radical publisher Richard Carlile who was serving a prison sentence in Dorchester jail for the publications in which he exposed the reactionary policies of the government of Lord Liverpool. The subscription was accompanied by a noble letter written by one of the contributors, William Tillotson.[3]

The population of Hunslet grew rapidly in the first half of the 19th century becoming an important manufacturing centre. Several large mills were built for spinning of flax including Hunslet Mill, and there were chemical works, works for the manufacture of crown and flint glass, extensive potteries for coarse earthenware and the Leeds Pottery.

By 1906 Hunslet was home to Leeds’ second-largest gas works, the city’s main rail goods yards, known at the time as Midland Goods Station (now the site of Crown Point Retail Park), as well as a large number of factories.

The area was redeveloped in the 1960s, the main feature of this being the Hunslet Grange (Leek Street flats). In the 1980s it was again redeveloped, and in the 2000s, the area around the River Aire and Clarence Dock was redeveloped.

The brewers Joshua Tetley and Son set up business in Hunslet in 1822 producing beer and bitter today as part of Carlsberg Tetley group. However, in 2011 the brewery closed.[4] 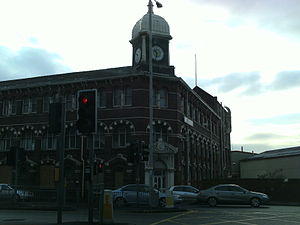 Hunslet, in the lower Aire Valley, is bounded on the east by the River Aire and covers nearly 1,200 acres of flat land. The underlying rocks were coal measures.[2] Hunslet has different areas including Hunslet Moor, Hunslet Carr, Crown Point, Pottery Fields and Penny Hill.

Crown Point once had a large railway depot which contained Leeds' main goods station. After many decades lying derelict the area was redeveloped into the Crown Point Retail Park, though the main railway cutting into the terminus station can still be seen at the southern end. The former track beds are currently let for storage and contain timber and brickwork. Tetley's Brewery is to the north of this area, as was the Yorkshire Chemical Works, which has now been demolished. Next to the river is Clarence Dock. 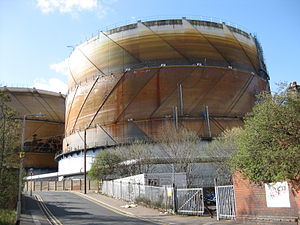 The gasholders at the Meadow Lane Gas Works 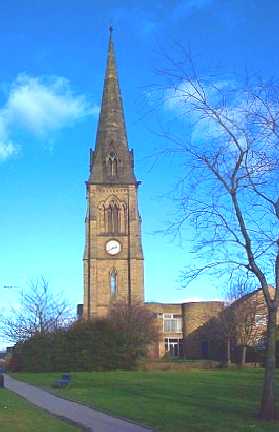 Penny Hill surrounds Church Street. This is the old centre of Hunslet referred to as Hunslet Grange when the Leek Street Flats (1968 to 1983) were built. The Leek Street Flats developed problems with crime and condensation and were demolished fifteen years after their construction. The area was again redeveloped in the 1980s with more traditional houses. The area contains the Penny Hill Shopping Centre and a Morrisons supermarket.

Hunslet today is still primarily based around manufacturing and heavy engineering. Newer industries have moved to the western fringes of the area in recent years with the building of new office complexes including the Leeds City Business Park which originally opened with offices for companies including O2 and British Gas. O2 have since moved to Morley. The Morrisons supermarket in the Penny Hill Centre as well as the Costco wholesale warehouse on Leathley Road are also large employers. In 2011, Aston Barclay, a car auction group, purchased the former Motor Auctions Leeds car centre on Hillidge Road to further add to the regeneration of the area.

A chapel dedicated to St. Mary the Virgin, was built in 1636, and enlarged in 1774. It was a brick structure with a tower. It was enlarged by subscription in 1826.[2] The present church is the third on the site. The Victorian church, of which the spire remains, is the tallest in Leeds, was built in 1864 and the present building was built in the 1970s.

Other smaller less notable churches exist in the district. The area is also home to St Joseph's Catholic Club, a sectarian social club.

Hunslet's redevelopment in the 1960s was notable for the construction of the Hunslet Grange (usually known as 'Leek Street Flats'). Construction of the 350 flats started in 1968 following a widespread slum clearance project in the area.[5] The complex was commissioned by Leeds City Council and built by Shepherd Construction,[6] in a maisonette style with so-called 'streets in the sky' and overhead walkways connecting blocks. The exterior of the buildings were pale grey pebbledashed concrete. Each floor had a rubbish disposal chute leading to huge bins at street level.[7] Hidden in the complex on the second floor were shops and a public house. Twelve of the blocks were six storeys in height and six were of seven, with the entrance on the second floor. The estate covered a large area of Hunslet and was arranged in three clusters around a small park.[8]

The individual flats had large windows and were spacious and light, and were very popular with their new tenants. But the popularity was short-lived; the heating systems were inadequate for the poorly insulated concrete prefabricated buildings, the interiors suffered from condensation and the exterior walls became streaked with black. In addition, the "rabbit-warren" layout made the estate hard to navigate and, within a few years, even harder to police.

Demolition of the complex started in 1983, less than fifteen years after the first tenants moved in, to be replaced with low-rise council housing, which was completed in the late 1980s.[5]

The area is home to a number of voluntary organisations servicing the community, this includes the Hunslet Club, a youth organisation established in 1940 which provides sport, dance and drama activities for hundreds of young people in the area as well as offering vocational education courses for 14- to 16-year-olds.[9]

Hunslet is also the home of Voluntary Action Leeds, the Council for Voluntary Service in Leeds. Which provides direct support services and specialist advice to Third Sector organisations across Leeds.[10] 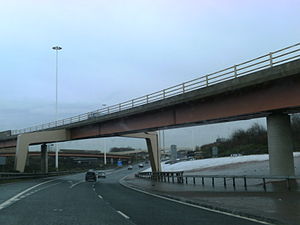 M621 junction 3, with entrance to junction 4 for Hunslet visible

The M621 and A61, two major roads, pass through the area, providing convenient access to the whole of Yorkshire and access the M62 to Manchester and Hull. The motorway was completed in 1971, and isolated a large part of Hunslet Moor.

Hunslet railway station was located on the Hallam Line. It later closed.

The area also possesses a historic rugby league club in the form of Hunslet RLFC who play at the John Charles Centre for Sport formerly known as the South Leeds Stadium. Hunslet were the first club in Rugby League to win "All Four Cups" in season 1907-08, the Challenge Cup, the RFL Championship, the Yorkshire County League Cup & the Yorkshire County Cup. Only two other clubs have achieved this feat, Huddersfield (1914–15) and Swinton (1927–28). Other local rugby league clubs include Hunslet Warriors and Hunslet Parkside.