From Infogalactic: the planetary knowledge core
(Redirected from List of Governors of Maine)
Jump to: navigation, search
NoneTemplate:SHORTDESC:None 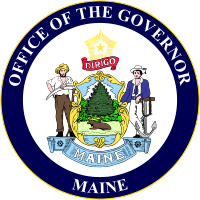 Seal of the governor of Maine

The governor of Maine is the head of government of Maine[1] and the commander-in-chief of its military forces.[2] The governor has a duty to enforce state laws,[3] and the power to either approve or veto bills passed by the Maine Legislature,[4] to convene the legislature at any time,[5] and, except in cases of impeachment, to grant pardons.[6]

There have been 71 governors of Maine since statehood, serving 75 distinct terms. Four governors served multiple non-consecutive terms (Edward Kent, John Fairfield, John W. Dana, and Burton M. Cross).[7] The longest-serving governor was Joseph E. Brennan, who served two terms from 1979 to 1987. The shortest-serving governors were Nathaniel M. Haskell and Richard H. Vose, who each served only one day. John W. Dana also served for one day in 1844, after the incumbent governor resigned, but was later elected to the governorship. The current governor is Democrat Janet Mills, who took office on January 2, 2019.

For the period before statehood, see Governor of Massachusetts.

Maine was admitted to the Union on March 15, 1820, as the 23rd state. Before then, it was the District of Maine, part of the state of Massachusetts.[8] The Maine Constitution of 1820 originally established a gubernatorial term of one year,[9] to begin on the first Wednesday of January; constitutional amendments expanded this to two years in 1879[10] and to four years in 1957.[11] The 1957 amendment also prohibited governors from succeeding themselves after serving two terms.[11] The constitution does not establish an office of lieutenant governor; a vacancy in the office of governor is filled by the president of the Maine Senate.[12] Prior to an amendment in 1964, the president of the senate only acted as governor.[13][14]

24 of Maine's governors have served higher federal offices. Seventeen have represented Maine in the U.S. House of Representatives, while 2 early in the state's history represented Massachusetts. There were also nine governors who served in the U.S. Senate, 5 (marked with *) resigning their office as governor to enter the Senate. 1 governor, Hannibal Hamlin, resigned his seat in the Senate to be governor (marked with †), then resigned as governor the next month to rejoin the Senate. Hamlin was also one of three governors to be ambassadors, and the only one to be Vice President of the United States. Two other governors served in the Cabinet.