The Battle of Kosovo (Serbian: Косовска битка/Kosovska bitka or битка на Косову/bitka na Kosovu, Turkish: Kosova Meydan Muharebesi) took place on 15 June 1389[A] between the army led by the Serbian Prince Lazar Hrebeljanović, and the invading army of the Ottoman Empire under the command of Sultan Murad Hüdavendigâr. The army under Prince Lazar consisted of his own troops, a contingent led by Serbian nobleman Vuk Branković, and a contingent sent from Bosnia by King Tvrtko I, commanded by Vlatko Vuković.[7] Prince Lazar was the ruler of Moravian Serbia, and the most powerful among the Serbian regional lords of the time, while Vuk Branković ruled District of Branković located in a part of Kosovo and other areas, recognizing Lazar as his overlord. The battle was fought on the Kosovo Field, in the territory ruled by Branković, in what is today Kosovo.[lower-alpha 1] Its site is about 5 kilometers (3.1 mi) northwest of the modern city of Prishtina.

Reliable historical accounts of the battle are scarce. The bulk of both armies were wiped out in the battle; both Lazar and Murad lost their lives in it. Although Ottomans managed to annihilate the Serbian army, they also suffered high casualties which delayed their progress. The Serbs were left with too few men to effectively defend their lands, while the Turks had many more troops in the east. Consequently, one after the other, the Serbian principalities that were not already Ottoman vassals became so in the following years.

Emperor Stefan Uroš IV Dušan "the Mighty" (r. 1331–55) was succeeded by his son Stefan Uroš V "the Weak" (r. 1355–71) whose reign was characterized by decline of central power and rise of numerous virtually independent principalities; this period is known as the fall of the Serbian Empire. Uroš V was unable to sustain the great empire created by his father nor to repulse the foreign threats and to limit the independence of the nobility; Uroš V died childless on 4 December 1371, after much of the Serbian nobility had been destroyed by the Ottomans in the Battle of Maritsa earlier that year. Prince Lazar, ruler of the northern part of the former empire (Moravian Serbia), aware of the Ottoman threat, began diplomatic and military preparations for a campaign against the Ottomans.

After the defeat of the Ottomans at Pločnik (1386) and Bileća (1388), Murad I, the reigning Ottoman sultan, moved his troops from Philippoupolis to Ihtiman (modern Bulgaria) in the spring of 1388. From there, the party traveled across Velbužd and Kratovo (modern R. Macedonia). Though longer than the alternative route through Sofia and the Nišava Valley, this route led the Ottoman party to Kosovo, one of the most important crossroads in the Balkans. From Kosovo, Murad's party could attack the lands of either Prince Lazar or Vuk Branković. Having stayed in Kratovo for a time, Murad and his troops marched through Kumanovo, Preševo and Gjilan to Pristina, where he arrived on June 14.[8]

While there is less information about Lazar's preparations, he gathered his troops near Niš, on the right bank of the South Morava. His party likely remained there until he learned that Murad had moved to Velbužd, whereupon he moved across Prokuplje to Kosovo. This was the best place Lazar could choose as a battlefield, as it gave him control of all the routes that Murad could take.[8]

Reliable historical accounts of the battle are scarce; however, a critical comparison with historically contemporaneous battles (such as Ankara or Nikopolis) enables reliable reconstruction.[8]

Lazar's army numbered from 12,000 to 30,000.[B] According to a Yugoslav encyclopaedia (1972), there were approximately 30,000 fighters present; 12,000 to 15,000 were under Lazar's command, with 5,000 to 10,000 under Vuk Branković, a Serbian nobleman from Kosovo, and just as many under the nobleman Vlatko Vuković,[8] who had been sent by the Bosnian king Tvrtko I Kotromanić. Also present were Knights Hospitaller led by the Croatian knight John of Palisna.[12] Several thousand were knights.[13] Furthermore, there have been several anachronistic accounts which have mentioned that the "Christian army" of Lazar was far greater, and that it also included contingents of other nations, although these cannot be verified.[C] 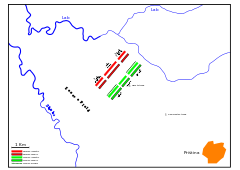 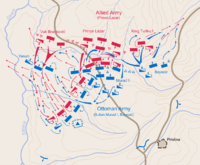 Plan of the battle

The armies met at the Kosovo Field. Murad headed the Ottoman army, with his sons Bayezid on his right and Yakub on his left. Around 1,000 archers were in the front line in the wings, backed up by azap and akinci; in the front center were janissaries, behind whom was Murad, surrounded by his cavalry guard; finally, the supply train at the rear was guarded by a small number of troops.[13] One of the Ottoman commanders was Pasha Yiğit Bey.[14]

The Serbian army had Prince Lazar at its center, Vuk on the right and Vlatko on the left. At the front of the Serbian army were the heavy cavalry and archer cavalry on the flanks, with the infantry to the rear. While parallel, the dispositions of the armies were not symmetrical, as the Serbian center had a broader front than the Ottoman center.[13]

Serbian and Turkish accounts of the battle differ, making it difficult to reconstruct the course of events. It is believed that the battle commenced with Ottoman archers shooting at Serbian cavalry, who then made ready for the attack. After positioning in a wedge formation,[15] the Serbian cavalry managed to break through the Ottoman left wing, but were not as successful against the center and the right wing.[13]

The Serbs had the initial advantage after their first charge, which significantly damaged the Ottoman wing commanded by Yakub Çelebi.[16] When the knights' charge was finished, light Ottoman cavalry and light infantry counter-attacked and the Serbian heavy armour became a disadvantage. In the center, Serbian fighters managed to push back Ottoman forces, except for Bayezid's wing, which barely held off the forces commanded by Vlatko Vuković. Vuković thus inflicted disproportionately heavy losses on the Ottomans. The Ottomans, in a ferocious counter-attack led by Bayezid, pushed the Serbian forces back and then prevailed later in the day, routing the Serbian infantry. Both flanks still held, with Vuković's drifting toward the center to compensate for the heavy losses inflicted on the Serbian infantry.

Sometime after Branković's retreat from the battle, the remaining Bosnian and Serb forces yielded the field, believing that a victory was no longer possible. 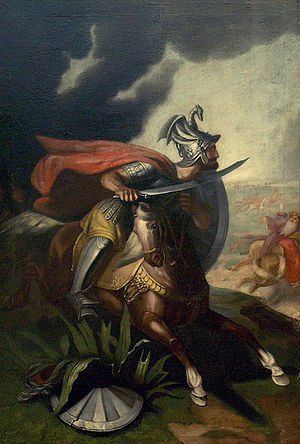 Miloš Obilić, the alleged assassin of Sultan Murad I.

As the battle turned against the Serbs, it is said that one of their knights, who later was identified as Miloš Obilić, pretended to have deserted to the Ottoman forces. When brought before Murad, Obilić pulled out a hidden dagger and killed the Sultan by slashing him, upon which the Sultan's bodyguards immediately killed him.

The earliest preserved record, a letter from the Florentine senate to King Tvrtko I of Bosnia dated 20 October 1389, says that Murad was killed during the battle. The killer is not named, but it was one of 12 Serbian noblemen who managed to break through the Ottoman lines:

Fortunate, most fortunate are those hands of the twelve loyal lords who, having opened their way with the sword and having penetrated the enemy lines and the circle of chained camels, heroically reached the tent of Murat himself. Fortunate above all is that one who so forcefully killed such a strong vojvoda by stabbing him with a sword in the throat and belly. And blessed are all those who gave their lives and blood through the glorious manner of martyrdom as victims of the dead leader over his ugly corpse.[17]

Another Italian account, Mignanelli's 1416 work, asserted that it was Lazar who killed the Ottoman sultan.[18]

Both armies were annihilated out in the battle;[7] both Lazar and Murad lost their lives, and the remnants of their armies eventually retreated from the battlefield. Murad's son Bayezid strangled his younger brother Yakub Çelebi upon hearing that their father had died, becoming the sole heir to the Ottoman throne.[19] The Serbs were left with too few men to defend their lands effectively, while the Turks had many more troops in the east.[7] Consequently, the Serbian principalities that were not already Ottoman vassals became so in the following years, one by one.[7] Furthermore, in response to Ottoman pressure,[20] some Serbian noblemen wed their daughters, including the daughter of Prince Lazar, to Bayezid.[21][22] In the wake of these marriages, Stefan Lazarević became a loyal ally of Bayezid, going on to contribute significant forces to many of Bayezid's future military engagements, including the Battle of Nicopolis. Eventually, the Serbian Despotate would, on numerous occasions, attempt to defeat the Ottomans in conjunction with the Hungarians until its final defeat in 1459 and again in 1540.[citation needed]

The Battle of Kosovo is particularly important to Serbian history, tradition, and national identity.[23]

The day of the battle, known in Serbian as Vidovdan (St. Vitus' day), is an important part of Serb ethnic and Serbian national identity,[24] with notable events in Serbian history falling on that day, among which are: in 1876 Serbia declared war on the Ottoman Empire (Serbian–Ottoman War (1876–78)); in 1881 Austria-Hungary and the Principality of Serbia signed a secret alliance; in 1914 the assassination of Archduke Franz Ferdinand of Austria was carried out by Gavrilo Princip (although a coincidence that his visit fell on that day, Vidovdan added nationalist symbolism to the event[25]); in 1921 Serbian king Alexander I proclaimed the Vidovdan Constitution; in 1989, on the 600th anniversary of the battle, Serbian political leader Slobodan Milošević delivered the Gazimestan speech on the site of the historic battle, etc.

The Tomb of Sultan Murad, a site in Kosovo Polje where Murad I's internal organs were buried, has gained a religious significance for the local Muslims. A monument was built by Murad I's son Bayezid I at the tomb, becoming the first example of Ottoman architecture in the Kosovo territory.[citation needed]