From Infogalactic: the planetary knowledge core
Jump to: navigation, search
For other uses, see Oulu (disambiguation).

listen); Swedish: Uleåborg [ˌʉːleɔˈbɔrj]) is a city and municipality of 198,804 inhabitants (31 March 2016)[3] in the region of Northern Ostrobothnia, Finland. It is the most populous city in Northern Finland and the fifth most populous city in the country. There are no larger cities (outside of Russia) that are more northerly than Oulu which is also considered one of Europe's "living labs", where residents experiment with new technology (such as NFC tags and ubi-screens) at a community-wide scale.[7]

The city is named after the river Oulujoki, which originates in the lake Oulujärvi. There have been a number of other theories for the origin of the name Oulu. One possible source for the name Oulu is a word in the Sami language meaning 'flood water', but there are other suggestions. At minimum, the structure of the word requires that, if originally given by speakers of a Uralic language, the name must be a derivative. In all likelihood, it also predates Finnish settlement and is thus a loanword from one of the now-extinct Saami languages once spoken in the area.

The most probable theory is that the name derives from the Finnish dialectal word oulu, meaning "floodwater", which is related to e.g. Southern Sami åulo, meaning "melted snow", åulot meaning "thaw" (of unknown ultimate origin). Two other word families have also been speculated to be related. The first is seen in the Northern Savo dialectal word uula and its Sami counterpart oalli, both meaning "river channel". The second is the Uralic root reconstructed as *uwa, meaning "river bed" (reflected as vuo in modern Finnish, also in derivatives such as vuolas "heavy-flowing"). To either of these roots, some Sami variety would have to be assumed having added further derivational suffixes.[8] 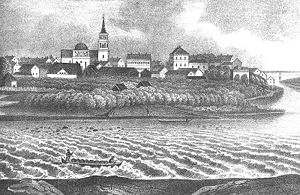 Drawing of central Oulu from the 19th Century

Oulu was founded on April 8, 1605, by King Charles IX of Sweden, opposite the fort built on the island of Linnansaari. This took place after favourable peace settlements with Russia, which removed the threat of attack via the main east-west waterway, the river Oulu.[citation needed] The surrounding areas were populated much earlier. Oulu is situated by the Gulf of Bothnia, at the mouth of river Oulujoki, which is an ancient trading site. Oulu was the capital of the Province of Oulu from 1776 to 2009.

In 1822, a major fire destroyed much of the city.[citation needed] The architect Carl Ludvig Engel, chiefly known for the neoclassical (empire style) buildings around Helsinki Senate Square, was enlisted to provide the plan for the rebuilding of the city. With minor changes, this plan remains the basis for the layout of Oulu's town center. The Oulu Cathedral was built in 1832 to his designs, with the spire being finished in 1844. During the Crimean War, Oulu's harbour was raided by the British fleet, destroying ships and burning tar houses, leading to international criticism.[citation needed]

Once known for wood tar and salmon, Oulu has evolved into a major high-tech centre, particularly in IT and wellness technology. Other prominent industries include wood refining, chemicals, pharmaceuticals, paper, and steel.[citation needed] 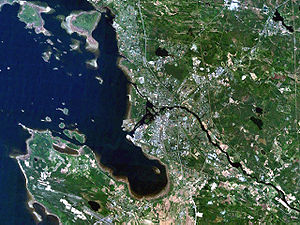 A satellite image showing the Oulu region in 2007

Oulu has a subarctic climate with cold, snowy winters and short, warm summers. Average annual temperature is 2.7 °C (36.9 °F). The average annual precipitation is 508 mm (20.00 in) falling 105 days per year, mostly in late summer and fall. 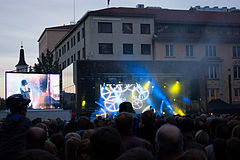 Many artists, writers, and musicians live in the city. A variety of concerts—rock, classical, and jazz—as well as other cultural events take place each year. Examples include the Oulu Music Video Festival, the Air Guitar World Championships, and the Musixine Music Film Competition, all in August. In July, the annual rock festival Qstock takes place. The Oulu Music Festival is held in winter and the Oulunsalo Music Festival in summer. The Irish Festival of Oulu takes place each October and the International Children's Film Festival each November.

Museums in Oulu include the Northern Ostrobothnia museum, the Oulu Museum of Art (OMA), the Tietomaa science center, and the Turkansaari open-air museum.

Notable statues and sculptures in Oulu include a sculpture of Frans Michael Franzén and The Bobby at the Market Place statue.

Kalmah is a melodic death metal-band from Oulu that formed in 1998. 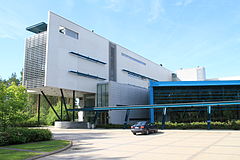 Oulu is home to the most northerly architecture school in the world. The school is best known for its strong regionalistic ideas for developing architecture. This movement is named "the Oulu school" ("Oulun koulu") of architecture.[citation needed]

Oulu International School is one of nine schools in Finland offering basic education in English. 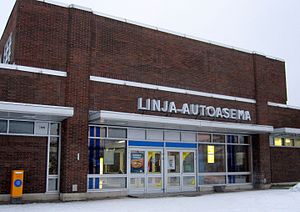 Oulu is served by Oulu Airport, the second largest airport in Finland by passenger volume. It is located 15 kilometres (9 mi) south-west of the city centre.

The Port of Oulu is one of the busiest harbours on the Bothnian Bay. It includes four separate harbour areas: Vihreäsaari oil and bulk docks, Nuottasaari docks and Oritkari docks.

The most important road in Oulu is Highway 4 (E8/E75) that runs from Helsinki to Utsjoki via Lahti, Jyväskylä, Oulu, Kemi and Rovaniemi. Other highways running to and from Oulu are Highway 20 to Kuusamo and Highway 22 to Kajaani.[12]

Oulu is notable for its transportation network dedicated to non-vehicular traffic including pedestrians and bicycles (termed "light" traffic in Finland). In 2010, the city contained more than 600 kilometres (370 mi) of pathways and more than 100 underpasses and bridges devoted exclusively to light traffic. The network is used year-round. The ratio of light traffic pathways to residents is the highest in Finland and the cycling mode share is 20 percent.[13][14] 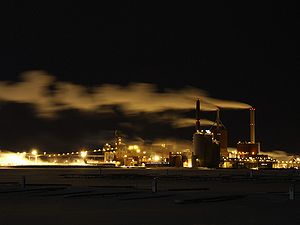 Stora Enso has an important paper manufacturing plant in Oulu. 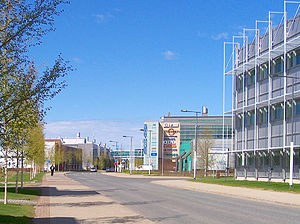 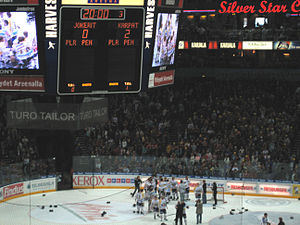 Kärpät wins the Finnish championship in 2005 after beating Jokerit.

In football AC Oulu is playing in Ykkönen, the second tier of Finnish league system. Up to date only OPS have claimed Finnish football championship by winning Mestaruussarja twice in 1979 and 1980. Other notable football clubs include OLS, OTP and Tervarit.

Oulu has one well known bandy club. OLS which plays in Bandyliiga and has become Finnish champions 14 times, last in 2014. The other one, OPS, with their 7 championships, and a beonze medal as late as in 2009, announced closing down the bandy team after the 2009-10 season. In 2001 the city was the main venue for the Bandy World Championship.