Växjö ([ˈvɛkːˈɧøː]) is a city and the seat of Växjö Municipality, Kronoberg County, Sweden. It had 63,479 inhabitants as of 2013,[1] out of a municipal population of 85,000. It is the administrative, cultural and industrial centre of Kronoberg County, and the episcopal see of the Diocese of Växjö. The town is home to Linnaeus University.

The city's name is believed to be constructed from the words "väg" (road) and "sjö" (lake), meaning the road over the frozen Växjö Lake that farmers took in the winter to get to the marketplace that later became the city. 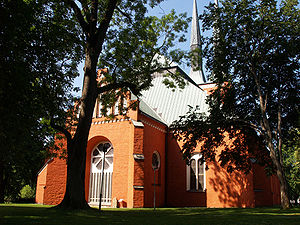 In contrast to what was believed a century ago,[2] there is no evidence of a special pre-Christian significance of the site. The pagan cultic center of Värend may have been located at Hov, a nearby village.[3][4]

The city has been an Episcopal see since the 12th century, but did not get its city charter until 1342, issued by Magnus Eriksson. During the Middle Ages Växjö did not have many pious institutions. A Franciscan monastery was established in 1485. There was a hospital of the Holy Ghost, first mentioned in 1318. In the 14th century Växjö got its first school, Växjö katedralskola. In 1643 it received gymnasium status.

At the beginning of Gustav Eriksson's war of liberation, the peasantry joined forces under the guidance of the union-hostile bishop Ingemar Pedersson, the mountain men and the peasantry of Dalarna, Hälsingland and Gästrikland, who urged fidelity to the their leader Gustav Eriksson.

During the Dacke War, a peasant uprising, the city was under the authority of Nils Dacke and his supporters, especially David Santander, from the summer of 1542 until after New Year 1543.

The Barbarella nightclub was prominent in southeastern Sweden in the 1970s, attracting a number of major international bands. 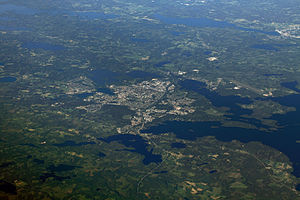 Seen from a plane, Växjö is surrounded by lakes

In 1996 the city adopted a policy of eliminating the use of fossil fuels by 2030.[7][8] This decision was taken in reaction to pollution and eutrophication in the lakes that surround the town. Greenhouse gas emissions were cut by 41% from 1993 to 2011, and will be reduced by 55% by 2015. The city economy has grown during this time.[9]

The city has three municipality-run ruled secondary schools ("gymnasiums"); Teknikum, Katedralskolan, Växjö and Kungsmadskolan. The Linnaeus University campus had 42,000 students as of 2012.

Industries include Alstom and Aerotech Telub, as well as Volvo Articulated Haulers located in Braås 29 kilometres (18 miles) north of Växjö. One of the most well-known service providers is Visma. Växjö houses Sweden's National Glass Museum [11] and claims to be the capital of the "Kingdom of Crystal" [12] as well as of the "Kingdom of Furniture".[13]

The Swedish Emigrant Institute [14] was established in 1965 and resides in the House of Emigrants near the Växjö lake in the heart of the city. It contains archives, library, museum, and a research center relating to the emigration period between 1846 and 1930, when 1.3 million (or 20%) of the Swedish population emigrated, mainly to the United States. Archives, dating to the 17th century, of birth and death records as well as household records are available on microfiche.

Immediately north of Växjö is Kronoberg Castle, a ruined fortress constructed in the 15th century. This castle was used as base by rebel Nils Dacke during the Dacke War. The fortress has thick walls and artillery portals that face out onto the lake Helgasjön to the north. The city is also the location of Teleborg Castle built in 1900 as a morning (wedding) gift and situated near the University. The Teleborg Castle now functions as a hotel and conference facility.

Växjö has an oceanic climate.[15] It is milder, wetter and cloudier than most of Sweden, with sunshine hours being more associated with the British Isles than with areas further north in the country. Considering its relative distance to all three coasts surrounding South Sweden, the climate is extremely marine, with winter lows being relatively subdued for an inland location. Temperatures have risen in recent years and for the 1961-1990 reference period Växjö was almost humid continental; however, under the standard Köppen classification it is well within the oceanic range for the 2002-2014 period. Compared with sunnier areas inland further north, Växjo has relatively cool summers. 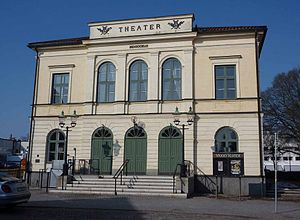 The following sports clubs are located in Växjö: