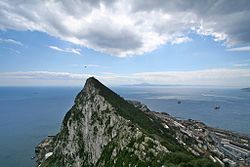 The European Pillar of Hercules: the Rock of Gibraltar (foreground), with the North African shore in the background. 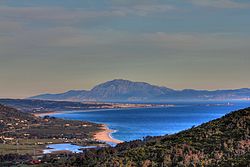 Jebel Musa, the North African Pillar of Hercules, as seen from Tarifa, at the other shore of the Strait of Gibraltar. 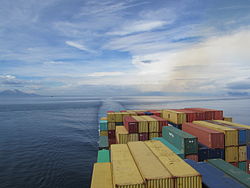 Pillars of Hercules from Mediterranean Sea: left the Jebel Musa, right the Rock of Gibraltar

The Pillars of Hercules (Latin: Columnae Herculis, Greek: Ἡράκλειοι Στῆλαι, Arabic: أعمدة هرقل‎‎, Spanish: Columnas de Hércules) was the phrase that was applied in Antiquity to the promontories that flank the entrance to the Strait of Gibraltar. The northern Pillar is the Rock of Gibraltar (now part of the British overseas territory of Gibraltar). A corresponding North African peak not being predominant, the identity of the southern Pillar has been disputed throughout history,[1] with the two most likely candidates being Monte Hacho in Ceuta and Jebel Musa in Morocco.

Modern conjectural depiction of the lost western section of the Tabula Peutingeriana, showing a representation of the Pillars of Hercules (Columne Ercole).

According to Greek mythology adopted by the Etruscans and Romans, when Hercules had to perform twelve labours, one of them (the tenth) was to fetch the Cattle of Geryon of the far West and bring them to Eurystheus; this marked the westward extent of his travels. A lost passage of Pindar quoted by Strabo was the earliest traceable reference in this context: "the pillars which Pindar calls the 'gates of Gades' when he asserts that they are the farthermost limits reached by Heracles."[2] There is one to one association between Herakles and Melqart since Herodotus, thus "Pillars of Melqart" in the temple near Gades/Gádeira (modern Cádiz) were widely proclaimed to be the true Pillars of Hercules.[3]

Before the 6th Century BCE several mountains in the edges of mainland Greece were seen as pillars that supported the sky. Amongst others, the two southward pointing headlands on each side of the Gulf of Laconia were "pillars of Hercules".[4] Support for this Peloponnesian location for the pillars comes from Medinet Habu in Egypt, dating to 1,200 BCE, which describes the Sea Peoples invading from the islands of the north "from the pillars of heaven", by which the Egyptians meant the ends of the earth as they knew it.[5] Earlier in the Aegean region there was, during Minoan and Mycenaean times a "pillar cult" in the region, that may relate to the pillars of Hercules. Crete, in Egypt was called "Keftiu" which has been etymologically related to the Greek word "Kapita" meaning "pillar" (hence the Capital of a pillar). Hercules, Ἡρακλῆς, Hēraklēs, from Hēra, "Hera", and kleos, "glory", was brought to Hera after his birth, and Hera did not recognize Heracles and nursed him out of pity. Heracles suckled so strongly that he caused Hera pain, and she pushed him away. Her milk sprayed across the heavens and there formed the Milky Way. But with divine milk, Heracles had acquired supernatural powers. Hera as a Snake Goddess sent two giant snakes just after the birth of Hercules to kill the child, but the child easily killed the snakes. Later Hercules was sent to Crete in the 7th Labour to capture the Bull of Knosses. Rodney Castledon writes of the pallace of Knossos, "There are two pillar crypts in the West Wing covered with double axe carvings. The double axe symbolises the Goddess, which implies that the carvings confirm the dedication of the west wing, at least, to the worship of the goddess. The temple´s overall plan revolves around the large rectangle of the central bull court... The East face of the square pillar, the face as you see as you enter the crypt, coincides with the Snake Goddess´s sanctuary".[6]

According to Plato's account, the lost realm of Atlantis was situated beyond the Pillars of Hercules, in effect placing it in the realm of the Unknown. Renaissance tradition says the pillars bore the warning Nec plus ultra (also Non plus ultra, "nothing further beyond"), serving as a warning to sailors and navigators to go no further.

According to some Roman sources,[7] while on his way to the garden of the Hesperides on the island of Erytheia, Hercules had to cross the mountain that was once Atlas. Instead of climbing the great mountain, Hercules used his superhuman strength to smash through it. By doing so, he connected the Atlantic Ocean to the Mediterranean Sea and formed the Strait of Gibraltar. One part of the split mountain is Gibraltar and the other is either Monte Hacho or Jebel Musa. These two mountains taken together have since then been known as the Pillars of Hercules, though other natural features have been associated with the name.[8] Diodorus Siculus,[9] however, held that instead of smashing through an isthmus to create the Straits of Gibraltar, Hercules narrowed an already existing strait to prevent monsters from the Atlantic Ocean from entering the Mediterranean Sea.

Pillars as a portal

The Pillars appear as supporters of the coat of arms of Spain, originating in the impresa of Spain's sixteenth century king Charles I, who was also the Holy Roman Emperor. It bears the motto Plus Ultra, Latin for further beyond, implying that the pillars were a gateway.

Coat of arms of Cádiz.

Beyond Gades, several important Mauritanian colonies (in modern-day Morocco) were founded by the Phoenicians as the Phoenician merchant navy pushed through the Pillars of Hercules and began constructing a series of bases along the Atlantic coast starting with Lixus in the north, then Chellah and finally Mogador.[10]

Near the eastern shore of the island of Gades/Gadeira (modern Cádiz, just beyond the strait) Strabo describes[11] the westernmost temple of Tyrian Heracles, the god with whom Greeks associated the Phoenician and Punic Melqart, by interpretatio graeca. Strabo notes[12] that the two bronze pillars within the temple, each eight cubits high, were widely proclaimed to be the true Pillars of Hercules by many who had visited the place and had sacrificed to Heracles there. But Strabo believes the account to be fraudulent, in part noting that the inscriptions on those pillars mentioned nothing about Heracles, speaking only of the expenses incurred by the Phoenicians in their making. The columns of the Melqart temple at Tyre were also of religious significance. 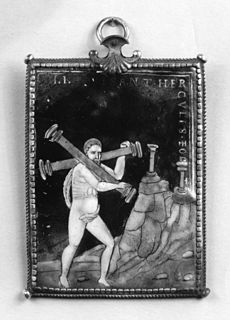 The Pillars in Syriac geography

Syriac scholars were aware of the Pillars through their efforts to translate Greek scientific works into their language as well as into Arabic. The Syriac compendium of knowledge known as Ktaba d'ellat koll 'ellan. "The Cause of all Causes", is unusual in asserting that there were three, not two, columns[13]

In Inferno XXVI Dante Alighieri mentions Ulysses in the pit of the Fraudulent Counsellors and his voyage past the Pillars of Hercules. Ulysses justifies endangering his sailors by the fact that his goal is to gain knowledge of the unknown. After five months of navigation in the ocean, Ulysses sights the mountain of Purgatory but encounters a whirlwind from it that sinks his ship and all on it for their daring to approach Purgatory while alive, by their strength and wits alone. 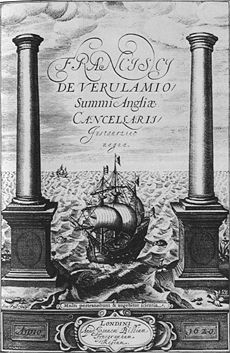 The Pillars appear prominently on the engraved title page of Sir Francis Bacon's Instauratio Magna ("Great Renewal"), 1620, an unfinished work of which the second part was his influential Novum Organum. The motto along the base says Multi pertransibunt et augebitur scientia ("Many will pass through and knowledge will be the greater").

On the Spanish coast at Los Barrios are Torres de Hercules which are twin towers that were inspired by the Pillars of Hercules. These towers are the tallest buildings in Andalucía.[14]