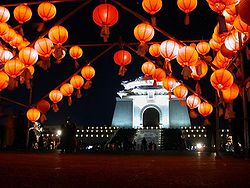 The following are considered holidays in Taiwan. Some are official holidays, some are not: