From Infogalactic: the planetary knowledge core
Jump to: navigation, search
For other usages, see Serapis (disambiguation). 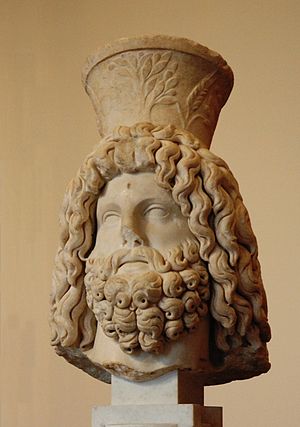 Serapis (Σέραπις, Attic/Ionian Greek) or Sarapis (Σάραπις, Doric Greek) is a Graeco-Egyptian god. The Cult of Serapis was introduced during the 3rd century BC on the orders of Ptolemy I of Egypt[1] as a means to unify the Greeks and Egyptians in his realm. The god was depicted as Greek in appearance, but with Egyptian trappings, and combined iconography from a great many cults, signifying both abundance and resurrection. A serapeum (Greek serapeion) was any temple or religious precinct devoted to Serapis. The cultus of Serapis was spread as a matter of deliberate policy by the Ptolemaic kings, who also built an immense Serapeum in Alexandria.

However, there is evidence which implies that cult of Serapis existed before the Ptolemies came to power in Alexandria - a temple of Sarapis (or Roman Serapis) in Egypt is mentioned in 323 BC by both Plutarch (Life of Alexander, 76) and Arrian (Anabasis, VII, 26, 2). The common assertion that Ptolemy "created" the deity is derived from sources which describe him erecting a statue of Sarapis in Alexandria: this statue enriched the texture of the Sarapis conception by portraying him in both Egyptian and Greek style.[2] Though Ptolemy I may have created the cult of Sarapis and endorsed him as a patron of the Ptolemaic dynasty and Alexandria, Sarapis was a syncretistic deity derived from the worship of the Egyptian Osiris and Apis (Osiris + Apis = Oserapis/Sarapis)[3] and also gained attributes from other deities, such as chthonic powers linked to the Greek Hades and Demeter, and benevolence linked to Dionysus.

Serapis continued to increase in popularity during the Roman period, often replacing Osiris as the consort of Isis in temples outside Egypt. In 389, a Christian mob led by the Patriarch Theophilus of Alexandria destroyed the Alexandrian Serapeum, but the cult survived until all forms of pagan religion were suppressed under Theodosius I in 391. 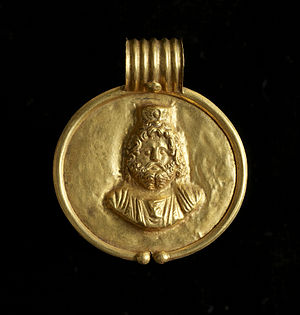 This pendant bearing Serapis's likeness would have been worn by a member of elite Egyptian society. Walters Art Museum, Baltimore.

His most renowned temple was the Serapeum of Alexandria.[5] Under Ptolemy Soter, efforts were made to integrate Egyptian religion with that of their Hellenic rulers. Ptolemy's policy was to find a deity that should win the reverence alike of both groups, despite the curses of the Egyptian priests against the gods of the previous foreign rulers (e.g. Set, who was lauded by the Hyksos). Alexander the Great had attempted to use Amun for this purpose, but he was more prominent in Upper Egypt, and not as popular with those in Lower Egypt, where the Greeks had stronger influence. The Greeks had little respect for animal-headed figures, and so a Greek-style anthropomorphic statue was chosen as the idol, and proclaimed as the equivalent of the highly popular Apis.[6] It was named Aser-hapi (i.e. Osiris-Apis), which became Serapis, and was said to be Osiris in full, rather than just his Ka (life force). 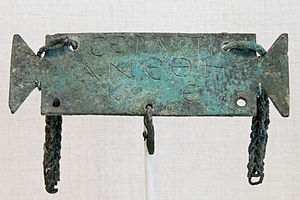 The earliest mention of a Serapis is in the disputed death scene of Alexander (323 BC).[7] Here, Serapis has a temple at Babylon, and is of such importance that he alone is named as being consulted on behalf of the dying king. His presence in Babylon would radically alter perceptions of the mythologies of this era: the unconnected Babylonian god Ea (Enki) was titled Serapsi, meaning 'king of the deep', and it is possible this Serapis is the one referred to in the diaries. The significance of this Serapsi in the Hellenic psyche, due to its involvement in Alexander's death, may have also contributed to the choice of Osiris-Apis as the chief Ptolemaic god.

According to Plutarch, Ptolemy stole the cult statue from Sinope, having been instructed in a dream by the "unknown god" to bring the statue to Alexandria, where the statue was pronounced to be Serapis by two religious experts. One of the experts was of the Eumolpidae, the ancient family from whose members the hierophant of the Eleusinian Mysteries had been chosen since before history, and the other was the scholarly Egyptian priest Manetho, which gave weight to the judgement both for the Egyptians and the Greeks.

Plutarch may not be correct, however, as some Egyptologists allege that the Sinope in the tale is really the hill of Sinopeion, a name given to the site of the already existing Serapeum at Memphis. Also, according to Tacitus, Serapis (i.e., Apis explicitly identified as Osiris in full) had been the god of the village of Rhakotis before it expanded into the great capital of Alexandria. 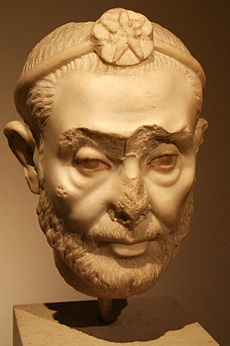 High Clerk in the Cult of Serapis, Altes Museum, Berlin

The statue suitably depicted a figure resembling Hades or Pluto, both being kings of the Greek underworld, and was shown enthroned with the modius, a basket/grain-measure, on his head, since it was a Greek symbol for the land of the dead. He also held a sceptre in his hand indicating his rulership, with Cerberus, gatekeeper of the underworld, resting at his feet, and it also had what appeared to be a serpent at its base, fitting the Egyptian symbol of rulership, the uraeus.

With his (i.e. Osiris's) wife Isis, and their son Horus (in the form of Harpocrates), Serapis won an important place in the Greek world. In his Description of Greece, Pausanias notes two Serapeia on the slopes of Acrocorinth, above the rebuilt Roman city of Corinth and one at Copae in Boeotia.[8]

Serapis was among the international deities whose cult was received and disseminated throughout the Roman Empire, with Anubis sometimes identified with Cerberus. At Rome, Serapis was worshiped in the Iseum Campense, the sanctuary of Isis built during the Second Triumvirate in the Campus Martius. The Roman cults of Isis and Serapis gained in popularity late in the 1st century when Vespasian experienced events he attributed to their miraculous agency while he was in Alexandria, where he stayed before returning to Rome as emperor in 70. From the Flavian Dynasty on, Serapis was one of the deities who might appear on imperial coinage with the reigning emperor.

The main cult at Alexandria survived until the late 4th century, when a Christian mob destroyed the Serapeum of Alexandria in 385, and the cult was included in the general proscription of religions other than approved forms of Christianity under the Theodosian decree.