From Infogalactic: the planetary knowledge core
Jump to: navigation, search
This article is about the species Equus ferus. For free-roaming horses descended from domesticated ancestry, see feral horse. For other uses, see Wild horse (disambiguation).

The wild horse (Equus ferus) is a species of the genus Equus, which includes as subspecies the modern domesticated horse (Equus ferus caballus) as well as the undomesticated tarpan (Equus ferus ferus), now extinct, and the endangered Przewalski's horse (Equus ferus przewalskii).[2] Przewalski's horse was saved from the brink of extinction and reintroduced successfully to the wild. The tarpan became extinct in the 19th century, though it was a possible ancestor of the domestic horse, and roamed the steppes of Eurasia at the time of domestication.[3][4][5][6][7] However, other subspecies of Equus ferus may have existed and could have been the stock from which domesticated horses are descended.[8] Since the extinction of the tarpan, attempts have been made to reconstruct its phenotype, resulting in horse breeds such as the Konik and Heck horse. However, the genetic makeup and foundation bloodstock of those breeds is substantially derived from domesticated horses, so these breeds possess domesticated traits.

The term "wild horse" is also used colloquially to refer to free-roaming herds of feral horses such as the mustang in the United States, the brumby in Australia, and many others. These feral horses are untamed members of the domestic horse subspecies (Equus ferus caballus), and should not be confused with the two truly "wild" horse subspecies extant into modern times.

Subspecies and their history

The latter two are the only never-domesticated "wild" groups that survived into historic times.[8] However, other subspecies of Equus ferus may have existed and could have been the stock from which domesticated horses are descended.[8]

Przewalski's horse occupied the eastern Eurasian Steppes, perhaps from the Urals to Mongolia, although the ancient border between tarpan and Przewalski distributions has not been clearly defined. Przewalski's horse was limited to Dzungaria and western Mongolia in the same period, and became extinct in the wild during the 1960s, but was reintroduced in the late 1980s to two preserves in Mongolia. Although researchers such as Marija Gimbutas theorized that the horses of the Chalcolithic period were Przewalski's, more recent genetic studies indicate that Przewalski's horse is not an ancestor to modern domesticated horses.[10][11]

Przewalski's horse is still found today, though it is an endangered species and for a time was considered extinct in the wild. Roughly 1500 Przewalski's horses are in zoos around the world. A small breeding population has been reintroduced in Mongolia.[12] As of 2005, a cooperative venture between the Zoological Society of London and Mongolian scientists has resulted in a free-ranging population of 248 animals in the wild.[13] 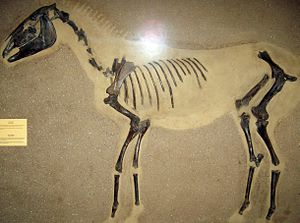 Equus ferus fossil from 9100 BC found near Odense, at the Zoological Museum in Copenhagen 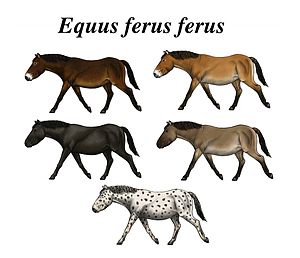 The horse family Equidae and the genus Equus evolved in North America, before the species moved into the Eastern Hemisphere. Studies using ancient DNA, as well as DNA of recent individuals, shows the presence of two closely related horse species in North America, the wild horse and the "New World stilt-legged horse;" the latter is taxonomically assigned to various names. [6] [16] Currently, three subspecies that lived during recorded human history are recognized.[9] One subspecies is the widespread domestic horse (Equus ferus caballus),[9] as well as two wild subspecies, the recently extinct tarpan (E. f. ferus) and the endangered Przewalski's horse (E. f. przewalskii).[4] [5] [9] Genetically, the predomestication horse, E. f. ferus, and domesticated horse, E. f. caballus, form a single homogeneous group (clade) and are genetically indistinguishable from each other.[6][16][17] [18] The genetic variation within this clade shows only a limited regional variation, with a notable exception of Przewalski's horse.[6][16][17][18] Przewalski's horse has several unique genetic differences that distinguish it from the other subspecies, including 66 instead of 64 chromosomes,[4] [19] unique Y-chromosome gene haplotypes, [20] and unique mtDNA haplotypes. [21] Besides genetic differences, osteological evidence from across the Eurasian wild horse range, based on cranial and metacarpal differences, indicates the presence of only two subspecies in postglacial times, the tarpan and Przewalski's horse.[8] [22]

Scientific naming of the species 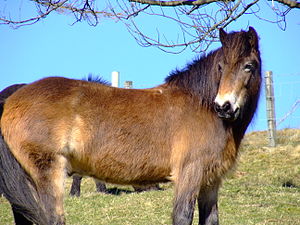 Semiferal horse in the Pentland Hills, Scotland:. Though popularly called "wild" horses, feral and semiferal horses are not truly wild; their ancestors were domesticated.

Horses that live in an untamed state but have ancestors that have been domesticated are not truly "wild" horses; they are feral horses. For example, when the Spanish reintroduced the horse to the Americas beginning in the late 15th century, some horses escaped and formed feral herds, the best-known being the mustang. The Australian equivalent to the Mustang is the brumby, descended from horses strayed or let loose in Australia by English settlers.[25] Isolated populations of feral horses occur in a number of places, including Portugal, Scotland, and a number of barrier islands along the Atlantic coast of North America from Sable Island off Nova Scotia, to the Cumberland Island, Georgia.[26] While these are often referred to as "wild" horses, they are not truly "wild" in the biological sense of having no domesticated ancestors.

In 1995, British and French explorers discovered a new population of horses in the Riwoche Valley of Tibet, unknown to the rest of the world, but apparently used by the local Khamba people. It was speculated that the Riwoche horse might be a relict population of wild horses,[27] but testing did not reveal genetic differences with domesticated horses,[28] which is in line with news reports indicating that they are used as pack and riding animals by the local villagers.[29] These horses only stand 12 hands (48 inches, 122 cm) tall and are said to resemble the images known as "horse no 2" depicted in cave paintings alongside images of Przewalski's horse.[28]