From Infogalactic: the planetary knowledge core
Jump to: navigation, search
This article is about the German city. For other uses, see Magdeburg (disambiguation).

listen); Low Saxon: Meideborg, [ˈmaˑɪdebɔɐx]) is the capital city of the state of Saxony-Anhalt, Germany. Magdeburg is situated on the Elbe River and was one of the most important medieval cities of Europe.

Emperor Otto I, the first Holy Roman Emperor, founder of the archbishopric of Magdeburg, was buried in the town's cathedral after his death. Magdeburg's version of German town law, known as Magdeburg rights, spread throughout Central and Eastern Europe. The city is also well known for the 1631 Sack of Magdeburg, which hardened Protestant resistance during the Thirty Years' War. Prior to it Magdeburg was one of the largest German cities and a notable member of the Hanseatic League. Magdeburg was destroyed twice in its history.

Magdeburg is the site of two universities, the Otto-von-Guericke University and the Magdeburg-Stendal University of Applied Sciences.[2]

Nowadays Magdeburg is a traffic junction as well as an industrial and trading centre. The production of chemical products, steel, paper and textiles are of particular economic significance, along with mechanical engineering and plant engineering, ecotechnology and life-cycle management, health management and logistics.

In 2005 Magdeburg celebrated its 1200th anniversary. In June 2013 Magdeburg was hit by record breaking flooding.[3] 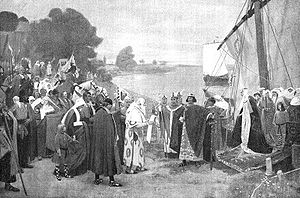 Kaiser Otto I and his wife Edith arrive near Magdeburg, in a 19th-century painting

Founded by Charlemagne in 805 as Magadoburg (probably from Old High German magado for big, mighty and burga for fortress[4]), the town was fortified in 919 by King Henry I the Fowler against the Magyars and Slavs. In 929 the city went to Edward the Elder's daughter Edith, through her marriage to Henry's son Otto I, as a Morgengabe — a Germanic customary gift received by the new bride from the groom and his family after the wedding night. Edith loved the town and often lived there; at her death she was buried in the crypt of the Benedictine abbey of Saint Maurice, later rebuilt as the cathedral. In 937, Magdeburg was the seat of a royal assembly. Otto I repeatedly visited Magdeburg and was also buried in the cathedral. He granted the abbey the right to income from various tithes and to corvée labour from the surrounding countryside.

In 1035 Magdeburg received a patent giving the city the right to hold trade exhibitions and conventions, which form the basis of the later family of city laws known as the Magdeburg rights. These laws were adopted and modified throughout Central and Eastern Europe. Visitors from many countries began to trade with Magdeburg.

Magdeburger Reiter, 1240, the first equestrian statue north of the Alps

In the 13th century, Magdeburg became a member of the Hanseatic League. With more than 20,000 inhabitants Magdeburg was one of the largest cities in the Holy Roman Empire. The town had an active maritime commerce on the west (towards Flanders), with the countries of the North Sea, and maintained traffic and communication with the interior (for example Brunswick). The citizens constantly struggled against the archbishop, becoming nearly independent from him by the end of the 15th century.

In about Easter 1497, the then twelve-year-old Martin Luther attended school in Magdeburg, where he was exposed to the teachings of the Brethren of the Common Life. In 1524, he was called to Magdeburg, where he preached and caused the city's defection from Catholicism. The Protestant Reformation had quickly found adherents in the city, where Luther had been a schoolboy. Emperor Charles V repeatedly outlawed the unruly town, which had joined the Alliance of Torgau and the Schmalkaldic League. Because it had not accepted the Augsburg Interim (1548), the city, by the emperor's commands, was besieged (1550–1551) by Maurice, Elector of Saxony, but it retained its independence. The rule of the archbishop was replaced by that of various administrators belonging to Protestant dynasties. In the following years Magdeburg gained a reputation as a stronghold of Protestantism and became the first major city to publish the writings of Luther. In Magdeburg, Matthias Flacius and his companions wrote their anti-Catholic pamphlets and the Magdeburg Centuries, in which they argued that the Roman Catholic Church had become the kingdom of the Antichrist.

In 1631, during the Thirty Years' War, imperial troops under Count Johann Tserclaes of Tilly, stormed the city and committed a massacre, killing about 20,000 inhabitants and burning the town in the sack of Magdeburg. The city had withstood a first siege in 1629 by Albrecht von Wallenstein. After the war, a population of only 4000 remained. According to the Peace of Westphalia (1648), Magdeburg was assigned to Brandenburg-Prussia after the death of the current administrator, August of Saxe-Weissenfels, as the semi-autonomous Duchy of Magdeburg; this occurred in 1680. 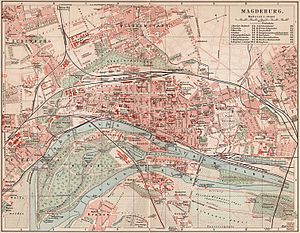 In the course of the Napoleonic Wars, the fortress surrendered to French troops in 1806. The city was annexed to the French-controlled Kingdom of Westphalia in the 1807 Treaty of Tilsit. King Jérôme appointed Count Heinrich von Blumenthal as mayor. In 1815, after the Napoleonic Wars, Magdeburg was made the capital of the new Prussian Province of Saxony. In 1912, the old fortress was dismantled, and in 1908, the municipality Rothensee became part of Magdeburg. 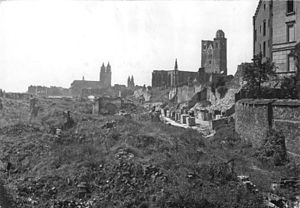 Magdeburg was heavily bombed by the Royal Air Force during the Second World War. The RAF bombing raid on the night of 16 January 1945, destroyed much of the city. The official death toll was approximately 16,000.

Near the end of World War II, the city of about 340,000 became capital of the Province of Magdeburg. Brabag's Magdeburg/Rothensee plant that produced synthetic oil from lignite coal was a target of the Oil Campaign of World War II. The impressive Gründerzeit suburbs north of the city, called the Nordfront, were destroyed as well as the city's main street with its Baroque buildings. It was occupied by USA troops in 19 April 1945 and was left to Red Army in 1 July 1945. Post-war the area was part of the Soviet Zone of Occupation and many of the remaining pre-World War II city buildings were destroyed, with only a few buildings near the cathedral and in the southern part of the old city being restored to their pre-war state. Prior to the reunification of Germany, many surviving Gründerzeit buildings were left uninhabited and, after years of degradation, waiting for demolition. From 1949 on until German reunification on 3 October 1990, Magdeburg belonged to the German Democratic Republic.

In 1990 Magdeburg became the capital of the new state of Saxony-Anhalt within reunified Germany. Huge parts of the city and its centre were also rebuilt in a modern style. Its economy is one of the fastest-growing in the former East German states.[5]

In 2005 Magdeburg celebrated its 1200th anniversary.

The city was hit by 2013 European floods. Authorities declared a state of emergency and said they expected the Elbe river to rise higher than in 2002. In Magdeburg, with water levels of five metres (16 ft) above normal, about 23,000 residents had to leave their homes on 9 June.[6]

Magdeburg has an oceanic climate (Cfb) according to Köppen climate classification. 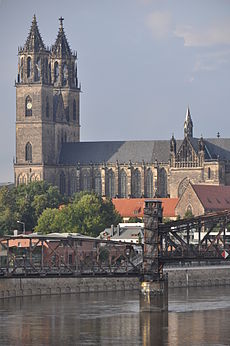 Cathedral of Magdeburg, seen from the other side of the Elbe river 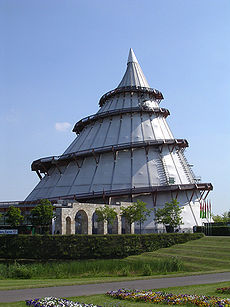 One of Magdeburg's most impressive buildings is the Lutheran Cathedral of Saints Catherine and Maurice with a height of 104 m (341.21 ft), making it the highest church building of eastern Germany. It is notable for its beautiful and unique sculptures, especially the "Twelve Virgins" at the Northern Gate, the depictions of Otto I the Great and his wife Editha as well as the statues of St Maurice and St Catherine. The predecessor of the cathedral was a church built in 937 within an abbey, called St. Maurice. Emperor Otto I the Great was buried here beside his wife in 973. St. Maurice burnt to ashes in 1207. The exact location of that church remained unknown for a long time. The foundations were rediscovered in May 2003, revealing a building 80 m (262.47 ft) long and 41 m (134.51 ft) wide.

The construction of the new church lasted 300 years. The cathedral of Saints Catherine and Maurice was the first Gothic church building in Germany. The building of the steeples was completed as late as 1520.

While the cathedral was virtually the only building to survive the massacres of the Thirty Years' War, it suffered damage in World War II. It was soon rebuilt and completed in 1955.

The square in front of the cathedral (sometimes called the Neuer Markt, or "new marketplace") was occupied by an imperial palace (Kaiserpfalz), which was destroyed in the fire of 1207. The stones from the ruin were used for the building of the cathedral. The presumed remains of the palace were excavated in the 1960s.

Magdeburg is one of the major towns along the Elbe Cycle Route (Elberadweg). 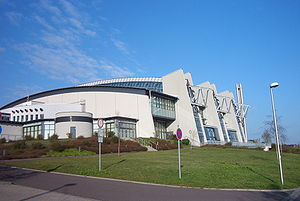 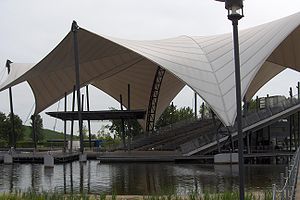 View of Magdeburg, from the tower of the Johanniskirche

The Otto-von-Guericke University Magdeburg (German: Otto-von-Guericke-Universität Magdeburg) was founded in 1993 and is one of the youngest universities in Germany. The university in Magdeburg has about 13,000 students in nine faculties. There are 11,700 papers published in international journals from this institute. 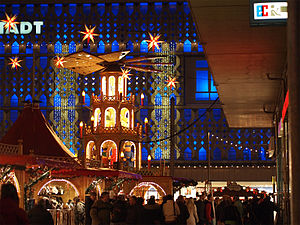 Magdeburg has a proud history of sports teams, with football proving the most popular. 1. FC Magdeburg currently play in the 3. Liga. The now defunct clubs SV Victoria 96 Magdeburg and Cricket Viktoria Magdeburg were among the first football clubs in Germany. 1. FC Magdeburg is the only East German football club to have won a European club football competition. There is also the very successful handball team, SC Magdeburg who are the first German team to win the EHF Champions League.

The city is portrayed as a rebel castle on the strategy map of Medieval II: Total War.

The discus was re-discovered in Magdeburg in the 1870s by Christian Georg Kohlrausch, a gymnastics teacher.

Magdeburg is well known for its Christmas market, which is an attraction for 1.5 million visitors every year. Other events are the Stadtfest, Christopher Street Day, Elbe in Flames and the Europafest Magdeburg

Magdeburg is twinned with:[7]