From Infogalactic: the planetary knowledge core
Jump to: navigation, search
For more details on the kings of the East Angles, including the Wuffingas, see List of monarchs of East Anglia. 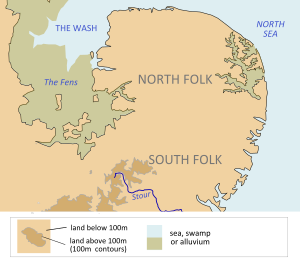 The kingdom of the East Angles during the period it was ruled by the Wuffingas, bordered by the North Sea, the River Stour, the Devil's Dyke and the Fens

The Wuffingas, Uffingas or Wuffings were the ruling dynasty of East Anglia, the long-lived Anglo-Saxon kingdom which today includes the English counties of Norfolk and Suffolk. The Wuffingas took their name from Wuffa, an early East Anglian king. Nothing is known of the members of the dynasty before Rædwald, who ruled from about 599 to c. 624. The Viking invasions of the ninth century destroyed the monasteries in East Anglia where many documents relating to the rule of the Wuffingas would have been kept.

The last of the Wuffingas kings was Ælfwald, who died in 749 and who was succeeded by kings whose lineage is unknown.

The following family tree includes the Wuffingas kings from Wehha to Ælfwald. They are numbered in order of ruling.[1] Ecgric of East Anglia was also a member of the Wuffingas house, but his exact descent is not decided. He may have been Sigebert's brother, or his step-brother.

The kingdom of East Anglia was settled by peoples from northern Europe during the 5th and 6th centuries. Historical sources relating to the genealogy of the East Anglian kings include the Anglo-Saxon Chronicle and Bede's Ecclesiastical History, both compiled many years after the kingdom was formed, as well as lists produced by medieval historians, such as the 12th century Textus Roffensis, who may have had access to other sources that are now lost. Several of the Wuffingas kings are included in a pedigree of Ælfwald, contained in the Anglian collection that dates from the 9th century. In the pedigree, Ælfwald is claimed to descend from the god Wōden.[2]

After 749, East Anglia was ruled either by the Mercians or by kings whose genealogy is not known.

Sam Newton has claimed that the poem Beowulf may have been composed during the reign of Ælfwald of East Anglia. Before the end of his rule, Ælfwald's kingdom contained a group of ecclesiastical centres, all of which had strong associations with the Wuffingas dynasty. These included the sees at Dommoc and Helmham, St. Botulph's monastery at Icanho, the religious foundations at Ely and Dereham founded by daughters of Anna, the minster at Blythburgh and the monastery founded by Sigeberht prior to his abdication and subsequent death in battle.[3]

After comparing Sutton Hoo with archaeological sites in Sweden, Sune Lindqvist suggested in 1948 that the Wuffingas may have been related to the Royal House of Uppsala descended from Wiglaf.[4][5]